By: David McMurrey and Cassandra Race

Upon completion of this chapter, readers will be able to do the following:

One of the most useful characteristics of technical writing is the use of headings.

Headings are the titles and subtitles you see within the actual text of much scientific, technical, and business writing. Headings are like the parts of an outline that have been pasted into the actual pages of the document.

Headings are an important feature of technical writing: they alert readers to upcoming topics and subtopics, help readers find their way around in long reports and skip what they are not interested in, and break up long stretches of straight text. They make text easy to navigate and enable the reader to find information they need quickly.

Headings are also useful for you, the writer. They keep you organized and focused on the topic. When you begin using headings, your impulse may be to slap in the headings after you've written the rough draft. Instead, visualize the headings before you start the rough draft, and plug them in as you write.

Take a look at this page from Healthy People.gov: Environmental Health

Examine the page, and observe how the use of headings makes the document readable and accessible. Its easy to see what each section is about, and you can quickly jump to sections that interest you.

"Well-designed headings can help not only readers but also writers understand the organization of a document."

In this chapter, you are encouraged to use a specific style of headings. If you want to use a different style, contact your instructor. Here are some specific guidelines on headings (see the figures at the end of this chapter for illustrations of these guidelines):

Figure 1: Heading style and format standard for courses using this online textbook. If you want to use a different format, contact your instructor.

The style and format for headings shown in this chapter is not the "right" or the "only" one, just one among many. Many technical writers must write according to a "house" style. Most organizations expect their documents to look a certain way. Using the style and format for headings described here gives you some experience with one of the key requirements in technical writing—writing according to "specifications."

To see the "house style" for headings—the style and format for headings you will use—see the illustrations in this chapter. Pay close attention to formatting details such as vertical and horizontal spacing, capitalization, use of bold, italics, or underlining, and punctuation. Notice that you can substitute bold for underlining.

Headings occur within the body of a document. Don't confuse headings with document titles. Although titles may look like first-level headings in smaller documents, think of them as separate things. Now, here are the specifications for headings in this chapter.

Note: To make things less complicated, consider the document title as a title not as a first-level heading. They certainly look the same, except that the title could be prefaced by a roman numeral. In short documents such as those you write for technical writing classes, use a centered title and then start with second-level headings in the body of the document.

Figure 2: Headings and outlines: headings function like outline elements inserted into the text at those points where they apply.

Note: In short documents such as those you write for technical writing classes, use a centered title and then start with second-level headings in the body of the document.

Note: If you prefer to make third-level headings standalone like second-levels, they may not be visually distinct enough from second-levels. If so, put a top border on second-levels, as you can see in this chapter.

Note: If you need a fourth level of heading, consider using italics instead of bold on the run-in heading format.

If you manually format each individual heading using the guidelines presented in the preceding, you'll find you're doing quite a lot of repetitive work. The styles provided by Microsoft Word, OpenOffice Writer, and other software save you this work. You simply select Heading 1, Heading 2, Heading 3, and so on. You'll notice the format and style are different from what is presented here. However, you can design your own styles for headings. Here's a video tutorial that will show you quickly how to use the Styles feature in MicroSoft Word.

When you design your own heading style, be careful about going overboard with fancy typographical elements. Also, continue to use the guidelines presented in this chapter; they apply to practically any design. And finally, use your heading design consistently throughout your document. 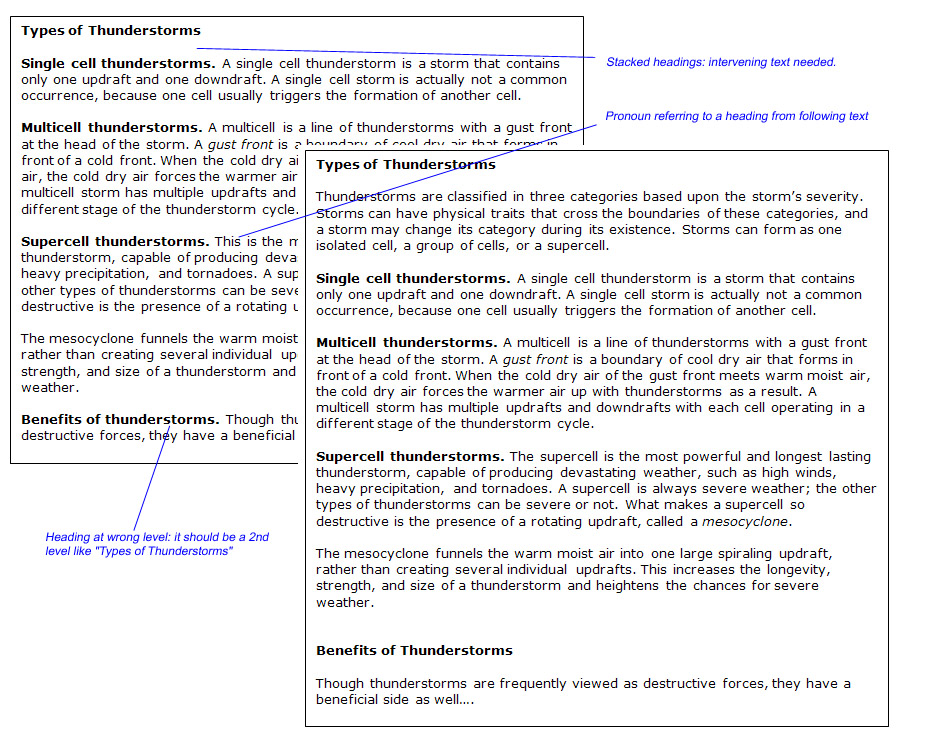 Common problems with headings: picture these outline items in the actual text.

A few more common heading problems: nonstandard capitalization, incorrect subordination, and "stacked" heads. There's nothing "wrong" about the caps style used in the first version; it's just not the "house" style. Subordination refers to the level of headings. "Stacked" headings occur when there is no text between two consecutive headings.

Want some more information on using headings? The Purdue OWL has a great guide on using APA style to create your headings. This style is also compatible with the styles noted for scientific journals. Check out the APA Headings page!

Complete the following activities to reinforce what you have learned about headings.

Activity 2: In that same journal (you may have to actually visit the library...or use the university's data base) examine the use of headings. Can you explain in your own words how the headings work to organize the article? See if you can find examples of headings that don't reflect the guidelines in this chapter.