By: Steve and Cherie Miller

Taken with kind permission from the book Why Brilliant People Believe Nonsense by J. Steve Miller and Cherie K. Miller.

Read not to contradict and confute; nor to believe and take for granted; nor to find talk and discourse, but to weigh and consider.

Brilliant people believe nonsense [because] they either fail to recognize fallacies, or misapply the ones they know.

Learning fallacies can be fatal to your argumentation and detrimental to your relationships. For these reasons, I teach logical fallacies with a great deal of hesitation. It's a bit like selling firearms to a person with no training in how to use them. I'd hate to be known as one who arms Internet trolls*.

Troll - A participant in social media who delights in haughtily slamming other people's positions before fully understanding either thei position or the context of the discussion.

So before I present a large list of fallacies, I'll acquaint you with a particularly pernicious type of fallacious reasoning that's running rampant on the Internet, but which is strangely absent from lists of fallacies. I call it "The Fallacy Fallacy."

I often read comments on blog posts or articles or Facebook discussions which accuse the writer of committing a specific logical fallacy and thus declaring the argument thoroughly debunked, typically with an air of arrogant finality. While the debunker may feel quite smug, intelligent participants consider him quite sophomoric*. In reality, he's typically failed to even remotely understand the argument, much less apply the fallacy in a way that's relevant to the discussion.

Sophomoric - A statement that is immature and poorly informed, but is spoken with overconfidence and conceit. The word is a composite of two Greek words meaning "wise" and "fool."

Surely this fallacy deserves a proper name and should be listed with other fallacies. Thus I'll define "The Fallacy Fallacy" as "Improperly connecting a fallacy with an argument, so that the argument is errantly presumed to be debunked.1

For those who sincerely want to learn from one another by hashing out issues, consider this: Trolls "flame" opponents by either calling them morons or presenting their arguments dogmatically, as if they have crushed their opponents. If you're concerned about the truth, seek more to understand than to demonstrate your brilliance. To accomplish this, suggest rather than slam; express tentativeness rather than dogmatic finality; ask questions rather than accuse.

Does it in any way weaken a counter-argument to word it in a cautious, humble manner, such as: "At first glance your argument appears to be an unwarranted appeal to authority. Are you really saying that your position is correct solely because Einstein believes it as well?"

In this way, the opponent is more likely to respond in a reasonable manner and you save face in case you took the comment out of context or otherwise misunderstood it.

Franklin was one of the most influential people in American history. He learned a lesson early in life which he considered of such significance that he discussed it at some length in his autobiography. He describes learning Socratic argumentation, which he delighted to use in humiliating his opponents. (As an annoying ass during this phase of a few years, he was a predecessor to the modern day Internet troll.) 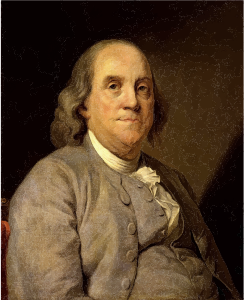 But over time, he realized that this method failed to either persuade others or to help him learn from them. Rather, it disgusted people. So he changed his method of argumentation. In Franklin's own words, he discovered the value of:

"never using, when I advanced anything that may possibly be disputed, the words certainly, undoubtedly, or any other that give the air of positiveness [meaning "dogmatism"] to an opinion; but rather say, I conceive or apprehend a thing to be so and so; it appears to me, or I should think it so or so, for such and such reasons; or I imagine it to be so; or it is so, if I am not mistaken. This habit, I believe, has been of great advantage to me when I have had occasion to inculcate my opinions, and persuade men into measures that I have been from time to time engaged in promoting." (italics his; brackets mine)3

As a result, Franklin became a skilled negotiator and persuader, allowing him to help start America's library system, organize firefighters, run a successful printing business, improve our postal service, negotiate with the French to aid us in the Revolutionary War, and assist in finalizing and adopting the Declaration of Independence, just to name a few of an astonishing array of accomplishments.4

Some Helpful Ways to Organize Fallacies

The plethora of known fallacies can be quite unwieldy, so let's first of all look at some helpful ways of classifying them. In this way, when you sense an argument is invalid but can't remember the name of the specific fallacy, at least you might be able to identify the category in order to better evaluate or research it.

(Example: "That sounds like a fallacy of definition.") Although no single categorization scheme has become standard, you'll find some of the categories (such as "formal" and "informal") used widely.5

Aristotle was perhaps the first to categorize logical fallacies in his De Sophisticis Elenchis (Sophistical Refutations). He lists 13 fallacies under two categories: Verbal (those depending on language) and Material (those not depending on language). In modern times, those building on Aristotle's two divisions often add a third: Logical or Formal—fallacies that violate the formal rules of the syllogism.

Fallacies in a Strict Sense

Invalid forms of deductive reasoning; the conclusion doesn't logically follow from the premises.

Informal Fallacies - The conclusion is invalid for reasons other than its form. (Example: Using vague or ambiguous terms.)

Fallacies in Non-Deductive Reasoning and in Observation

Errors in inductively reasoning from evidence to a conclusion or hypothesis.

Analogy - A weak analogy, one that has few or trivial points of resemblance, may have no evidential value at all.

Probability - Example: Although the probability of flipping a coin five times and getting heads every time is low, that doesn't mean that if you got heads four times in a row, it's very unlikely that you'll get heads in the next flip. The odds are still 50/50.

Observation - Example: Often what we observe is skewed by what we want or expect to observe.

The argument fails because of some reason other than invalid deductive reasoning or arguing from evidence.

Inconsistency- You can't have it both ways. "Petitio Principii" - Including your conclusion in your premises (aka begging the question or arguing in a circle).

A Priori Fallacies - Bringing to the argument unfounded preconceptions that influence the conclusion.

"Ignoratio Elenchi" - Missing the point: An argument concerning something that was never meant, in the context of the argument, to be proven.

Fallacies of Interrogation - Demanding a narrow and specific answer to questions that demand broader answers. Example: "Answer yes or no: Have you stopped beating your wife?"

Fallacies in Explanation and Definition - Example: using the same word in two different ways in an argument, thus invalidating the argument.6

In Fischer's instructive and delightful book, Historians' Fallacies,7 he discusses 112 fallacies under 11 categories. Note that these apply far beyond professional historians. Whenever we blog about an event, summarize our family vacation on Facebook, or write that first high school paper on "What I Did for My Summer Vacation," we're telling history, and risk committing these fallacies. Here are Fischer's categories:

Question-framing - Historians begin their research by asking one or more questions. If these questions are vague or ill-conceived, they will yield the wrong answers. Example: asking a complex question and expecting a simple answer.

Factual Significance - Historians can't report every fact from a period of history; they must be selective. If they select based on the wrong criteria, their conclusions will likely be wrong as well.

Narration - Historians gather threads of historical data and weave them into stories. Yet, "nothing but the facts" is often at odds with great storytelling, which assigns feelings and even time sequences that may not be warranted by the historical data.

Causation - Example: The reductive fallacy reduces a complex historical cause to a simplistic one.

Motivation - Historians often assign motives without sufficient evidence; for example, assuming that a Roman Emperor thinks, reacts, and is motivated by the same things that motivate a middle-aged academic historian at Berkeley.

Composition - Historians tend to study and write about groups, or individuals as part of groups, whether the groups be social, religious, nation al, ideological, cliques, castes or economic. One fallacy of composition is assuming that the character of one member is shared by the rest of the group.

Semantical Distortion - Problems with unclear or imprecise prose. For example, the failure to clarify definitions of terms.

Substantive Distraction - The argument shifts the reader's attention to issues that are irrelevant to the discussion.

While categorization schemes are helpful for getting an overview of types of fallacies, none seem to be without their downsides. For example, some fallacies seem to fit snugly into multiple categories.

In my first Appendix, I list a great number of fallacies. I don't recommend trying to memorize them. Rather, familiarize yourself with each of them so that in the future, when you run across an argument that doesn't sound quite right, you can return to the list to search for a fallacy that might apply. If you're reading this for a class, your teacher or professor may single out certain fallacies that they deem the most important or the most frequently abused in literature and the media.

There are many ways to go wrong in our arguments. Some are a bit technical. But by familiarizing ourselves with fallacies, learning to apply them correctly, and discussing disagreements in a civil and humble manner, we can learn from each other and mutually come closer to the truth.

Pursuing the Point of Know Return

Recommended Trail for the Incurably Curious and Adventurous

For any fallacies that seem unclear or are of special interest to you, Google them to find other explanations and illustrations.