Path of a Vesicle

In the secretory pathway, the path of a vesicle created by the cell starts at the endoplasmic reticulum. A vesicle consists of a membrane of phospholipids and cholesterol, first generated in the smooth ER, while the membrane and secretion proteins were translated in the Rough ER (See Chapter 4). The glycosylation of membrane proteins also occurs in the ER and/or the Golgi apparatus. Transmembrane proteins or soluble proteins carried to other parts of the endomembrane system are moved from the ER, in vesicles, and fuse with the cis side of the Golgi. The Golgi apparatus consists of several layers of membranes, called cisternae. As the protein passes through the cisternae, the addition of more carbohydrates may occur. Eventually, a new vesicle buds off the trans face of the Golgi and will then fuse with the cell membrane or other endomembrane location (Figure 10-1). 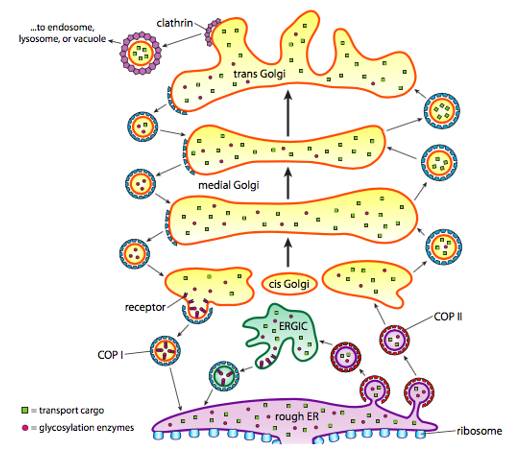 Figure 10-1: The endomembrane system. Vesicles bud from the endoplasmic reticulum and merge to form ERGIC (ER-Golgi Intermediate Compartment), which matures into the cis Golgi, then the medial Golgi, and finally, the trans-Golgi. Vesicles may also bud from any of these other compartments to other organelles or the plasma membrane.

In addition to protein processing, the ER and Golgi also take care of some types of protein transport. Vesicles pinch off from the ER, Golgi, and other membranous organelles, carrying with them whatever soluble molecules were inside the fluid that was enclosed as well as any molecules embedded in that section of the membrane. These vesicles then catch a ride on a molecular motor protein such as kinesin or myosin (See Chapter 1) and travel along the cytoskeleton until they dock at the appropriate destination and fuse with the target membrane or organelle. In general, vesicles move from the ER to the cis Golgi, to the medial Golgi, to the trans-Golgi, and then to the plasma membrane or other endomembrane compartments.

The formation of vesicles is dependent on coat proteins that will, under proper conditions, assemble into spherical cages. When associated with transmembrane proteins, they can pull the attached membrane along into a spherical shape also. The main types of coat proteins used in vesicle formation are COPII, COPI, and clathrin.

Table 10-1: Coat Proteins. Direction of movement of vesicles when coated with Clathrin, COPI or COPII.

Figure 10-2: Clathrin. (A) A single clathrin triskelion is composed of three heavy chains and three light chains. (B) The triskelions self-assemble into a roughly spherical construct without the need for any additional energy or enzymes.

There is a significant similarity between the vesicle formation mechanisms using these different coat proteins, beginning with the recruitment of adaptor proteins called adaptin. This protein helps to link the coat protein to the membrane. Clathrin is the best described of the three coat proteins, and the arrangement of clathrin triskelions (from Greek, meaning three-legged) generates the vesicular coats (Figure 10-2). 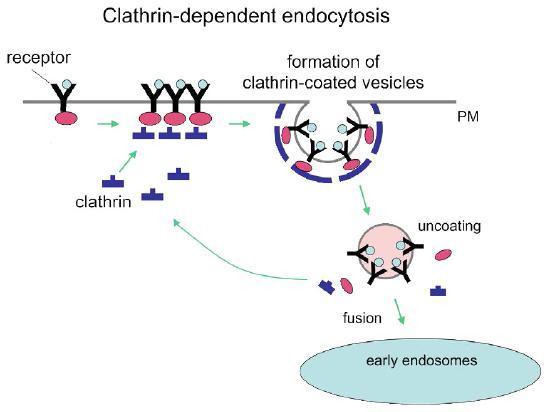 Figure 10-3: Clathrin-mediated endocytosis of receptors. Membrane-bound receptors are black; adaptin proteins are in pink, and clathrin is in blue. Binding of the cargo molecule to the receptor stimulates the pathway of sequential protein binding. First, adaptin binds to the bound receptor, then clathrin binds and bends the membrane; lastly, dynamin separates the vesicle from the plasma membrane. Once the vesicle is in the cytoplasm, it uncoats and moves to the early endosome.

First, cargo molecules (proteins to be transported) bind to a specific membrane-bound receptor. The adaptin protein binds to the “tail” end of membrane-bound receptor proteins, acting as the link between the membrane (through the receptors) and the coat proteins (Figure 10-3). Clathrin then attaches to the adaptin proteins where they spontaneously (i.e., without any requirement for energy expenditure) self-assemble into cage-like spherical structures (Figure 10-2B). Clathrin-coated invaginations are known as “coated pits.” The mechanism proceeds with an inward budding of the plasma membrane receptor (coated vesicles). The last step in this process is to pinch off the membrane using the dynamin protein (Figure 10-4), thus releasing a coated vesicle into the cytoplasm. 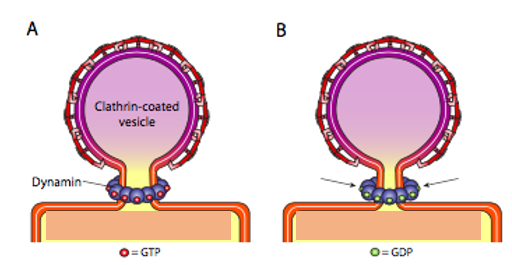 Figure 10-4: Release of vesicles. Dynamin monomers, each of which is a GTPase, polymerizes around the neck of the vesicle. With the hydrolysis of the GTP to GDP, the dynamin “noose” tightens and pinches off the vesicle.

Cholesterol is an essential component of all cell membranes. Human cells get much of their cholesterol from the liver and, assuming your diet is not strictly "100% cholesterol-free", by absorption from the intestine. Most cells can, as needed, either synthesize cholesterol or acquire it from the Extracellular Fluid (ECF) using receptor-mediated endocytosis.

Cholesterol is a hydrophobic molecule and quite insoluble in water. Thus it cannot pass from the liver and/or the intestine to the cells dissolved in blood and ECF. Instead, it is transported by a lipoprotein. The most abundant cholesterol carriers in humans are the low-density lipoproteins or LDLs.

LDL particles are spheres covered with a single layer of phospholipid molecules with their hydrophilic heads exposed to the watery fluid (e.g., blood) and their hydrophobic tails directed into the interior. Some 1,500 molecules of cholesterol (each bound to a fatty acid) occupy the hydrophobic interior of LDL particles. One molecule of a protein called apolipoprotein B (apoB) is exposed at the surface of each LDL particle (Figure 10-5).

Cells acquire LDL particles by first binding them noncovalently to LDL receptors exposed at the cell surface. These transmembrane proteins have a site that recognizes and binds to the apolipoprotein B on the surface of the LDL. The portion of the plasma membrane with bound LDL uses endocytosis to internalize the vesicle, via a clathrin-dependent process. This is the beginning of the endocytic pathway of vesicles. Internalized material from endocytosis passes through an internalized structure called an endosome. The exception is material engulfed via phagocytosis, which is processed by the lysosome only. Endosomes are membrane-bound structures inside of eukaryotic cells that play a role in endocytosis. They have a sorting function for material internalized into the cell, providing for retrieval of materials not destined for destruction in the lysosomes. For example, LDL molecules are targeted after endocytosis to the endosomes for processing before part of them is delivered to the lysosome.

In the early endosome, a hydrogen ion pump moves H+ ions into the organelle against the concentration gradient. The increase in H+ ions decreases the pH (~pH 7 to pH 5) in the early endosome, which breaks the noncovalent bonds between the LDL cargo and the receptor. The early endosome then pinches apart into two smaller vesicles: one containing free LDL cargo molecules, the other containing now-empty receptors. The vesicle with the LDL cargo fuses with a lysosome to form a secondary lysosome. A hydrogen ion pump in the lysosome membrane decreases the pH even lower (~pH 2-3). Then the enzymes of the lysosome release free cholesterol into the cytosol. The vesicle with unoccupied receptors returns to and fuses with the plasma membrane, turning inside out as it does so (exocytosis). In this way, the recycling of the LDL receptors to the cell surface allows for reuse (Figure 10-6). 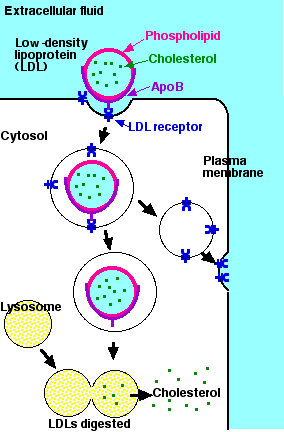 Figure 10-6: Overview of clathrin-based receptor-mediated endocytosis of LDL particles. The ApoB proteins embedded in the lipoprotein coat, bind noncovalently to the membrane-bound LDL receptor. This stimulates the clathrin pathway to bring in the cargo into the cell. The uncoated vesicle is directed to the early endosome, where an embedded hydrogen pump moves H+ ions into the organelle. This decrease in pH breaks the noncovalent bonds between the receptor and cargo. A vesicle is formed to take the released LDL receptors back to the plasma membrane, while the LDL cargo is transported to the lysosome.

People who inherit two defective (mutant) genes for the LDL receptor have receptors that function poorly or not at all. This creates excessively high levels of LDL in their blood and predisposes them to atherosclerosis and heart attacks. Hypercholesterolemia is inherited. Mutations in APOB, the apoB gene, cause another form of inherited hypercholesterolemia.

Vesicles carry two categories of cargo: soluble proteins and transmembrane proteins. Soluble proteins enter a forming ER vesicle in two ways; some by being bound to a receptor protein, and others by being in the vicinity and “scooped up” as the vesicle forms.

Secretory vesicles have a unique problem with soluble cargo. If the vesicle were to rely simply on enclosing proteins within it during the formation process, it would be challenging to get high concentrations of specific secreted proteins. Many secreted proteins are needed by the organism quickly, and in significant amounts, so there is a mechanism in the trans-Golgi for aggregating secretory proteins. The mechanism uses aggregating proteins that bring together the target proteins in large concentrated granules. 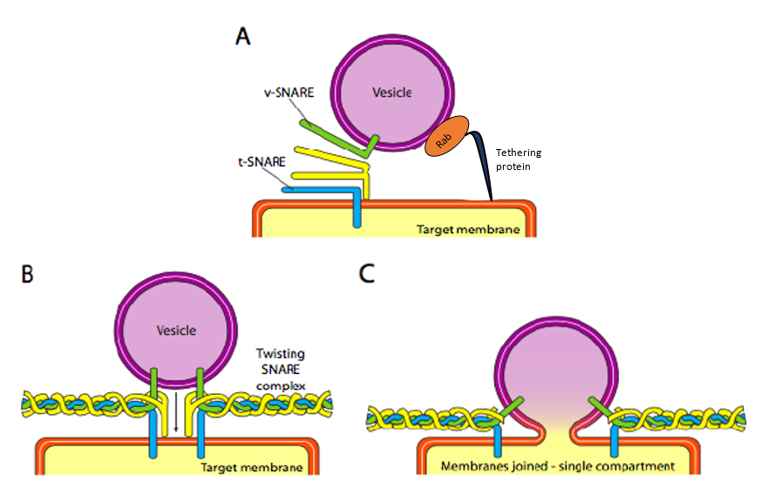 Figure 10-7: Vesicle fusion. A) Rab on the surface of vesicles first interact with tethering proteins on the target membrane, which acts as a recognition event. B) and C) SNAREs can then interact, and if they match, then they will begin to twist around each other, ratcheting the two membranes closer as they twist, resulting in vesicle fusion.

Zippering also causes flattening and lateral tension of the curved membrane surfaces, favoring hemifusion of the outer layers of each membrane. Continued tension results in the subsequent fusion of the inner membranes as well, yielding the opening of the contents of the vesicle chamber to its target (usually outside the cell). 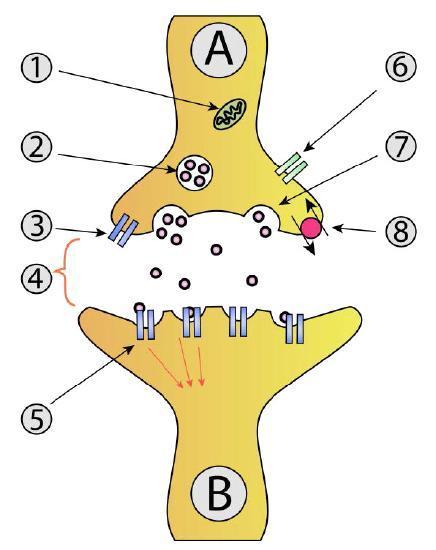 Some toxins have been shown to act directly on the pathway of vesicle fusion. For example, the tetanus toxin, tetanospasmin, which is released by Clostridium tetani bacteria, causes spasms by acting on nerve cells and preventing neurotransmitter release. The mechanism for this is that it cleaves synaptobrevin, a SNARE protein so that the synaptic vesicles cannot fuse with the cell membrane. Botulinum toxin, from Clostridium botulinum, also acts on SNAREs to prevent vesicle fusion and neurotransmitter release, although it targets different neurons and so has the opposite effect: tetanus is caused by preventing the release of inhibitory neurotransmitters, while botulism is caused by preventing the release of excitatory neurotransmitters (Figure 10-9).

Botulinum toxin, one form of which is sold under the brand name Botox, can be used to treat several disorders involving excessive muscle contraction, including migraines and cervical dystonia. Cervical dystonia causes abnormal, involuntary muscle contractions of the neck. This results in jerky movements of the head and neck, and/or a sustained abnormal tilt to the head. It is often painful and can significantly interfere with a person’s life. For cosmetic purposes, botulinum toxin injected into the facial muscles, relaxes them to reduce the appearance of wrinkles. When used to treat cervical dystonia, it is injected into the muscles of the neck to inhibit excessive muscle contractions, by preventing the release of neurotransmitters due to the fact that they cleave SNARE proteins. For many patients, this helps relieve the abnormal positioning, movements, and pain associated with the disorder. The effect is temporary, so the injections must be repeated every three to four months to keep the symptoms under control.

Another neurotoxin is tetanus toxin, which is produced by the gram-positive bacterium Clostridium tetani. This toxin also has a light A subunit and heavy protein chain B subunit. Unlike botulinum toxin, tetanus toxin binds to inhibitory interneurons, which are responsible for the release of the inhibitory neurotransmitters glycine and gamma-aminobutyric acid (GABA). Normally, these neurotransmitters bind to neurons at the neuromuscular junction, resulting in the inhibition of acetylcholine release. Tetanus toxin inhibits the release of glycine and GABA from the interneuron, resulting in permanent muscle contraction. The first symptom is typically stiffness of the jaw (lockjaw). Violent muscle spasms in other parts of the body follow, typically culminating with respiratory failure and death. 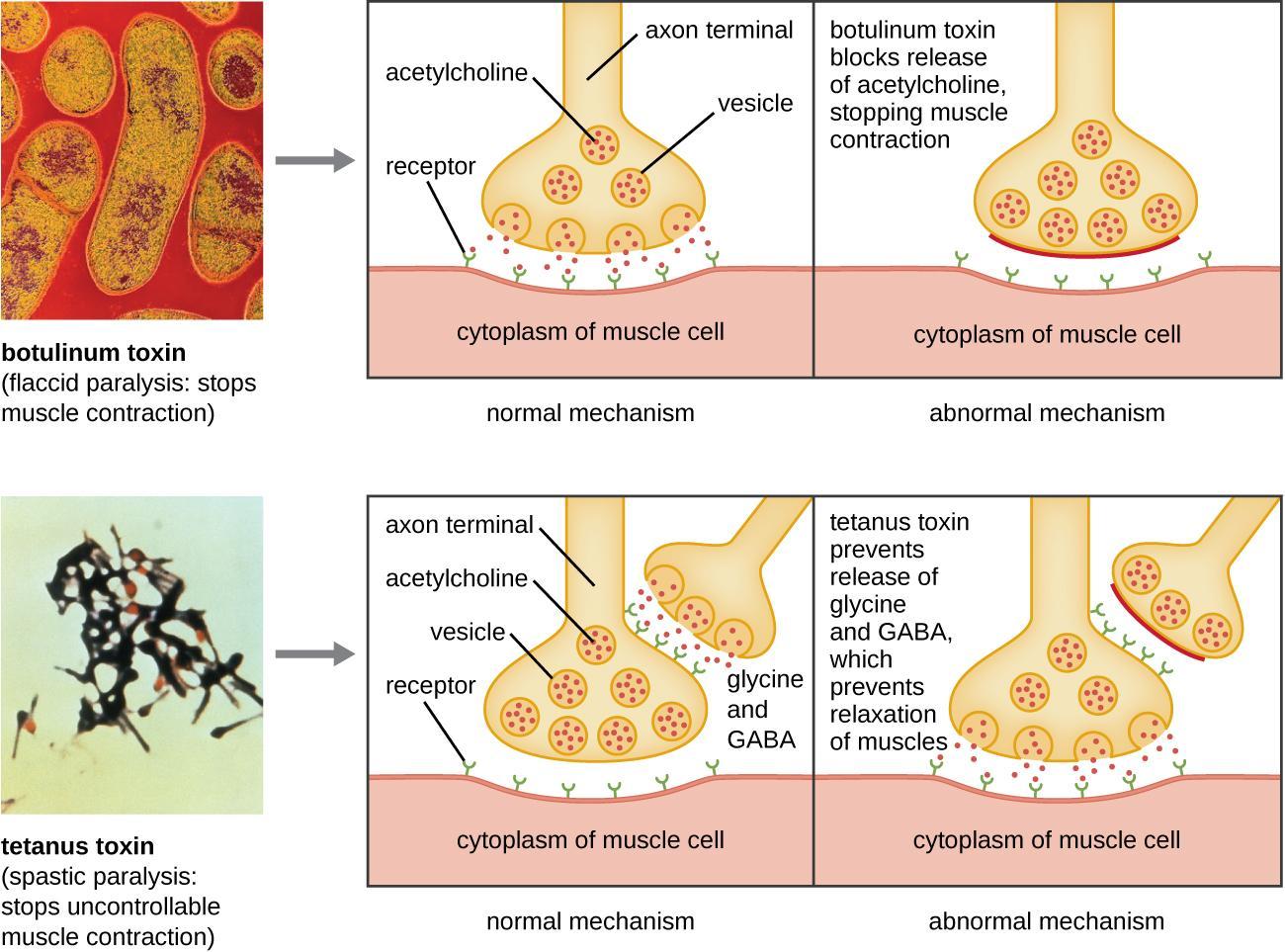