In the previous chapter, we discussed the general principles of cell signaling, including the class of proteins termed receptors, which bind signaling molecules. Here, we further explore two types of receptors—G-protein coupled receptors (GPCRs) and receptor tyrosine kinases (RTKs)—and their roles in signal transduction. 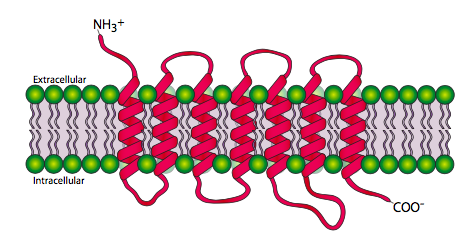 Figure 12-1: GPCRs. G-protein coupled receptors (GPCRs) have seven transmembrane domains and are associated with an intracellular G-protein (not shown in figure).

Cell signaling using GPCRs occurs as a cyclic series of events. Before the signaling molecule binds, the inactive G-protein can bind to a newly revealed site on the receptor specific for its binding. Once the G-protein binds to the receptor, the resultant shape change activates the G-protein, which releases GDP on the α subunit and binds GTP, resulting in the G protein now being activated or “on.” The subunits of the G-protein then split into the α subunit and the βγ subunit. One or both of these G-protein fragments (α or βγ) may be able to activate other proteins as a result. To turn the pathway “off,” the GTP on the active α subunit of the G-protein is hydrolyzed to GDP and the βγ subunit is deactivated or “off”. The subunits re-associate to form the inactive G-protein, and the cycle begins anew (Figure 12-2). 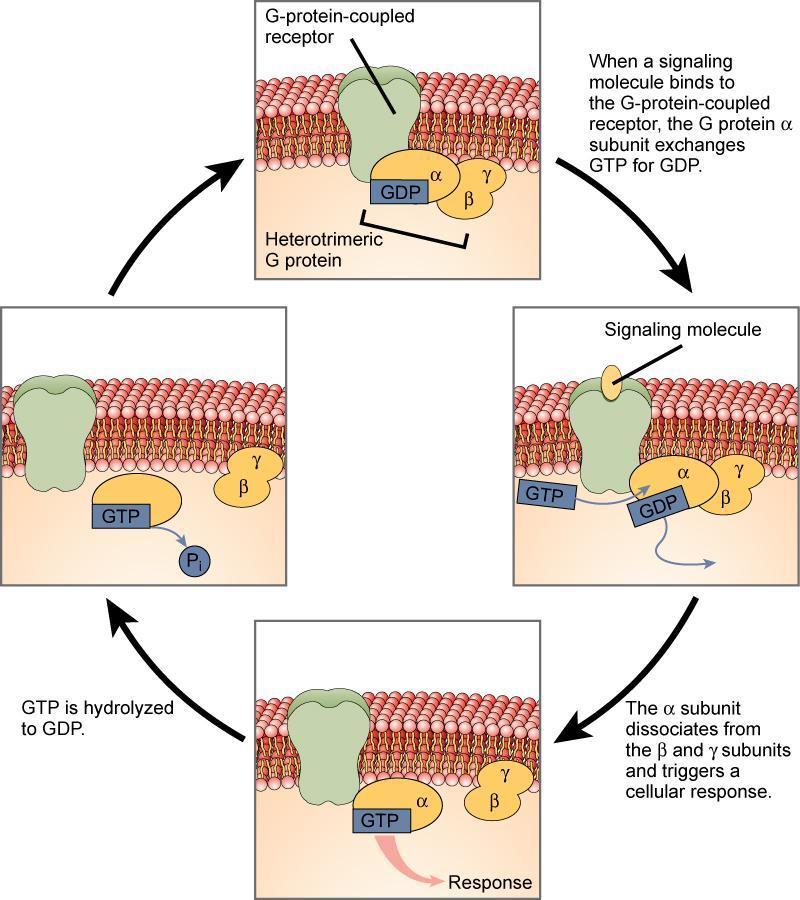 G-protein-coupled receptors have been extensively studied, and much has been learned about their roles in maintaining health. Bacteria that are pathogenic to humans can release poisons that interrupt specific G-protein-coupled receptor functions, leading to illnesses such as pertussis, botulism, and cholera. In cholera, for example, the water-borne bacterium Vibrio cholerae produces a toxin, choleragen, which binds to cells lining the small intestine. The toxin then enters these intestinal cells, where it modifies a G-protein that controls the opening of a chloride channel and causes it to remain continuously active, resulting in large losses of fluids from the body and potentially fatal dehydration as a result.

One of the two classical pathways initiated by GPCRs starts with G-protein stimulation of adenylyl cyclase (AC). After binding of the ligand to the GPCR and the subsequent activation of the G-protein. The newly activated and released βγ subunit interacts with AC, which is a membrane-associated enzyme that converts ATP to cAMP (Figure 12-3). Since ATP is plentiful in the cell, and AC is a relatively fast enzyme, the amplification of the signal comes with the generation of the second messenger molecule cAMP, where second messengers can amplify and relay the signal received by the GPCR throughout the cell. Each cAMP molecule can activate other enzymes, the primary one being protein kinase A (PKA). PKA can then phosphorylate a variety of substrates to alter cellular activity by gene expression, molecular motors, or metabolic changes (Figure 12-4).

One example of how the cAMP/PKA signal transduction pathway is used in cells is the “fight or flight” response. The hormone adrenaline binds to its receptor, a GPCR. This leads to the activation of AC and the subsequent increase in cellular cAMP levels and activation of PKA. Once active, PKA phosphorylates enzymes responsible for metabolizing glycogen into glucose. The result is more glucose is available to cells, providing energy for “fight” or “flight.”

Figure 12-3: cAMP. Adenylyl cyclase metabolizes ATP into cyclic AMP (cAMP). cAMP is a secondary major, which serves to amplify the cellular response to the primary signaling molecule. Termination of the signal occurs when an enzyme called phosphodiesterase converts cAMP into AMP. 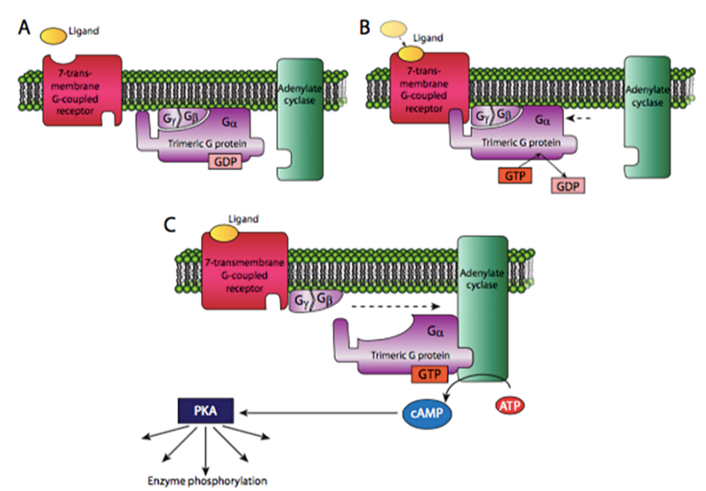 Figure 12-4: The cAMP/PKA signal transduction pathway. A signaling molecule binds to a GPCR, leading to activation of the associated G-protein. The active G-protein binds to adenylyl cyclase (shown as adenylate cyclase above), stimulating the enzyme to convert ATP to the secondary messenger, cAMP. The cAMP binds to PKA, activating its kinase activity. Once active, PKA can phosphorylate several effectors to elicit different cellular responses.

Another signaling pathway that is commonly activated by GPCRs is the phospholipase C (PLC)/calcium pathway. Similar to the previously described pathway, this signaling is initiated when an activated G-protein (Gα-GTP) binds to and activates an enzyme; in this case, the enzyme is phospholipase C (PLC). PLC cleaves the membrane lipid phosphatidylinositol 4,5-bisphosphate (PIP2) into two products: diacylglyceride (DAG) and inositol 3-phosphate (IP3) (Figure 12-5). DAG remains in the membrane, while IP3 is released into the cytoplasm. Both DAG and IP3 can serve as secondary messengers to stimulate downstream signaling events. 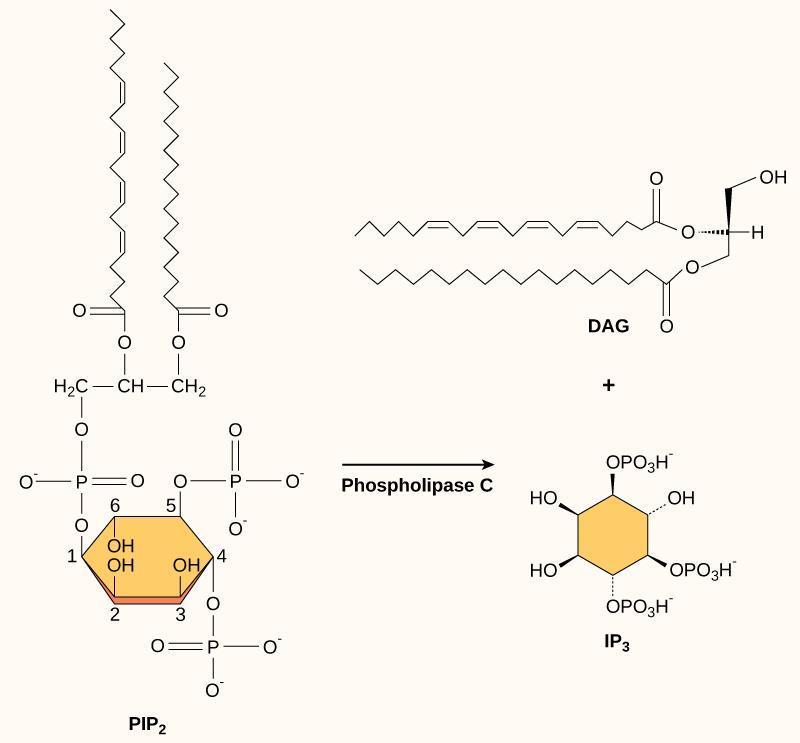 IP3 opens ligand-gated ion channels on the endoplasmic reticulum, increasing the cellular levels of calcium. Next, DAG and/or calcium bind to and activate protein kinase C (PKC) (Note: There are many isoforms of PKC. Some are activated by both DAG and calcium, others by other DAG or calcium alone, and others by different lipids) (Figure 12-6). Once active, PKC phosphorylates many different effectors, results in various cellular responses. Some examples include immune cell activation, platelet aggregation, and secretion of digestive enzymes. 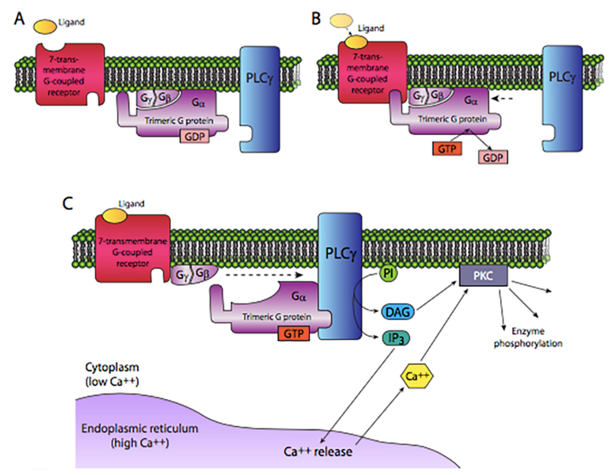 Figure 12-6: The PIP2/Ca++ Signal Transduction. (A) The G-protein is inactive with GDP bound. (B) Upon ligand binding, G-protein binds to the receptor, exchanges GDP for GTP, and Ga dissociates. (C) Ga-GTP activates PLC, which metabolizes the membrane lipid PIP2 (note: this is abbreviated as “PI” in the figure above) into DAG and IP3. The latter induces Ca2+ release into the cytoplasm and, together with DAG, activates PKC. 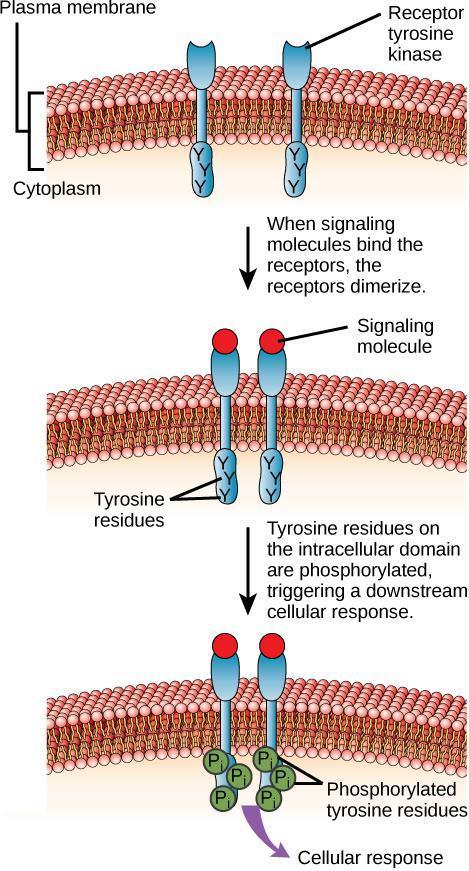 Figure 12-7: RTK Activation. A receptor tyrosine kinase (RTK) is an enzyme-linked receptor comprised of two protein subunits. Binding of a signaling molecule to the extracellular domain causes the receptor to dimerize. Tyrosine residues on the intracellular domain are then autophosphorylated, triggering a downstream cellular response. The signal is terminated by a phosphatase that removes the phosphates from the phosphotyrosine residues.

In many types of cancer, Ras is mutated in cancers so that it can no longer hydrolyze GTP to GDP. This results in Ras being constitutively active, leading to sustained activation of the MAP Kinase cascade and uncontrolled cell growth. 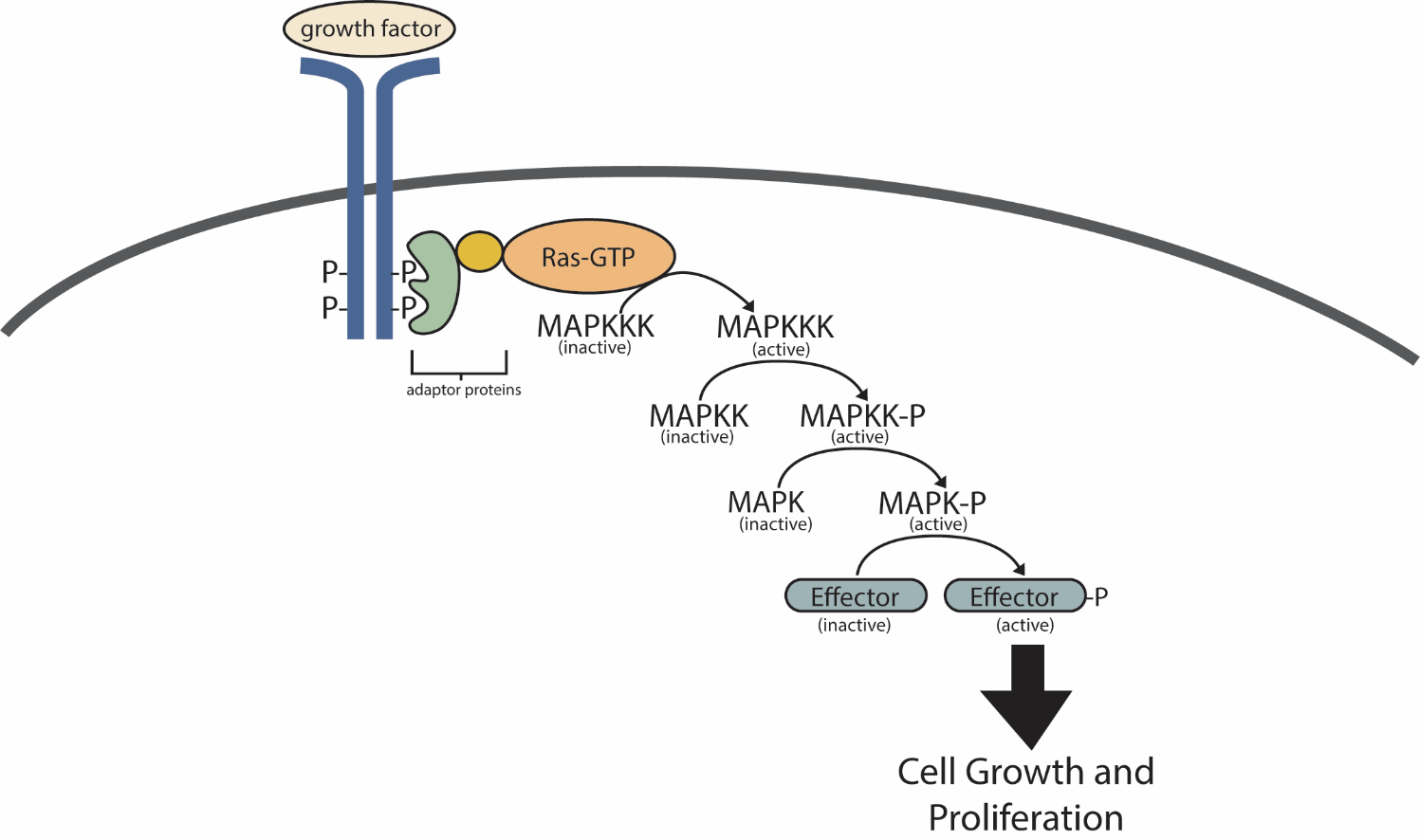 One example of RTK/MAPK signaling is the cellular response to epidermal growth factor (EGF) (Figure 12-9). EGF binds to EGF Receptor (EGFR), an RTK. EGFR stimulates Ras and the MAP Kinase signaling cascade, leading to the activation of effectors that collects stimulate cell growth, cell migration, and angiogenesis (the development of new blood vessels). As such, the over activation of EGFR is implicated in many cancers. 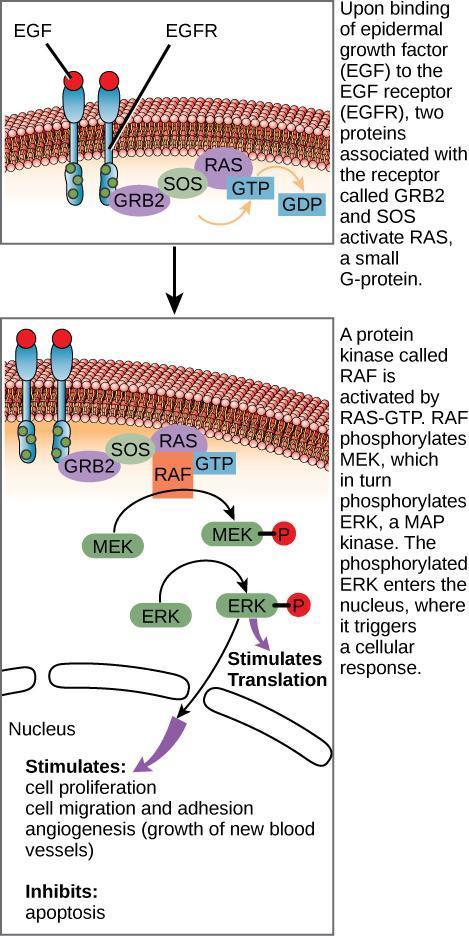 Figure 12-9: EGFR and Cancer. The epidermal growth factor (EGF) receptor (EGFR) is a receptor tyrosine kinase involved in the regulation of cell growth, wound healing, and tissue repair. When EGF binds to the EGFR, a cascade of downstream events causes the cell to grow and divide. If EGFR is activated at inappropriate times, uncontrolled cell growth (cancer) may occur.

GPCR and RTK pathways, as well as other signaling pathways not discussed in this book, can undergo “cross-talk”, meaning their intracellular signaling pathways converge to elicit cellular responses (Figure 12-10). Thus, signaling pathways can get very complicated very quickly because most cellular proteins can affect different downstream events, depending on the conditions within the cell. A single pathway can branch off toward different endpoints based on the interplay between two or more signaling pathways, and the same ligands are often used to initiate different signals in different cell types. This variation in response is due to differences in protein expression in different cell types. Another complicating element is signal integration of the pathways, in which signals from two or more different cell-surface receptors merge to activate the same response in the cell. This process can ensure that multiple external requirements are met before a cell commits to a specific response. 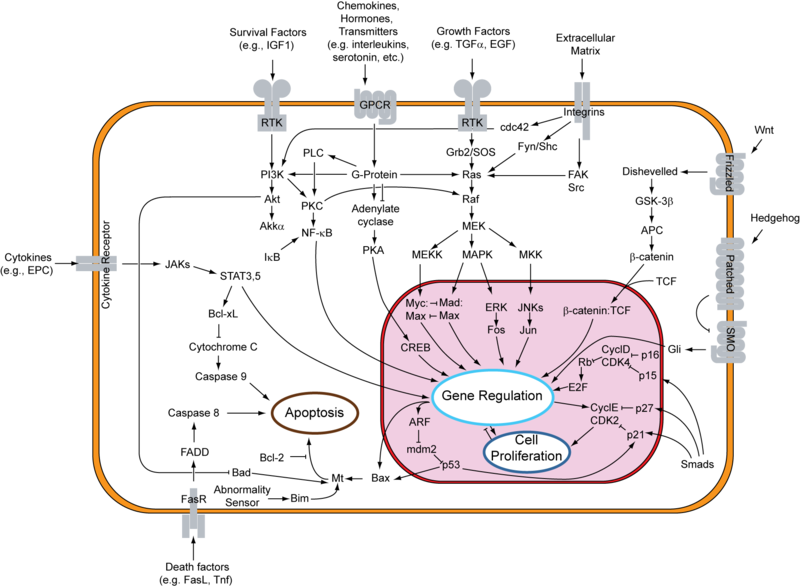 Chapter 13 - The Cell Cycle and Its Regulation