The cytoskeleton is a network of different protein fibers that provide many functions. It maintains or changes the shape of the cell, secures some organelles in specific positions, enables the movement of cytoplasm and vesicles within the cell, and enables the cell to move in response to stimuli. There are three types of fibers within the cytoskeleton: microfilaments (also called actin filaments), intermediate filaments, and microtubules. Some of the cytoskeletal filaments work in conjunction with molecular motors that move along the filaments within the cell to carry out a diverse set of functions (Fig 1-1). 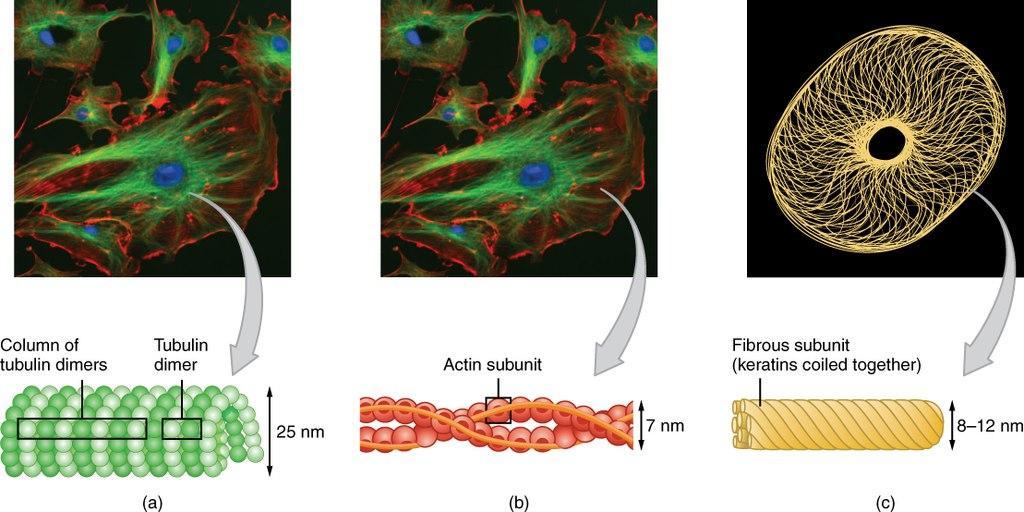 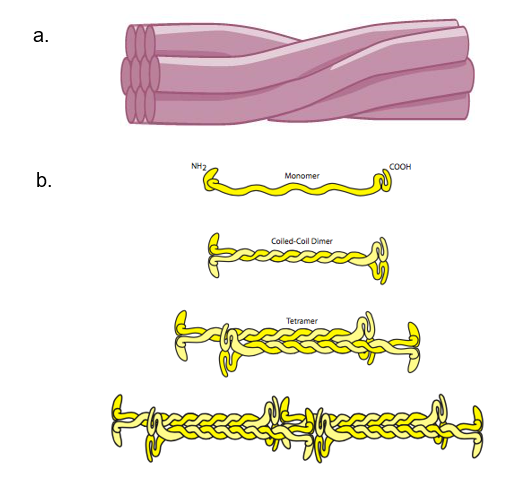 Intermediate filaments have no role in cell movement. Their function is purely structural. They bear tension, providing tensile strength, which is the strength to help a cell withstand mechanical stress. Therefore, they help to maintain the shape of the cell and anchor the nucleus and other organelles in place. The basic unit of intermediate filament structure is a dimer of monomers, called a coiled-coil. Dimers further aggregate to form tetramers and larger filament bundles. The dimers are formed and then are staggered together, generating tetramers, which then bind together, resulting in twisted strands of protein that provide tensile strength to cells (Fig 1-2b).

Skin cells have a high concentration of the intermediate filament keratin. Keratin forms a mesh-like network throughout cells. Additionally, these keratin networks connect to keratin networks of adjacent cells via bundles of keratin fibers in a cellular adhesion structure called a desmosome (Fig 1-3). Desmosomes are necessary for the structural integrity of epithelial layers and are the most common cell-cell junction in such tissues. Due to desmosomes, the pressure that might be able to burst a single cell can be spread out over many cells, sharing the burden, and thus protecting each member. Keratin, therefore, provides tensile strength to skin cells, allowing them to move together as a sheet, rather than separating in response to mechanical stressors (like a pinch). 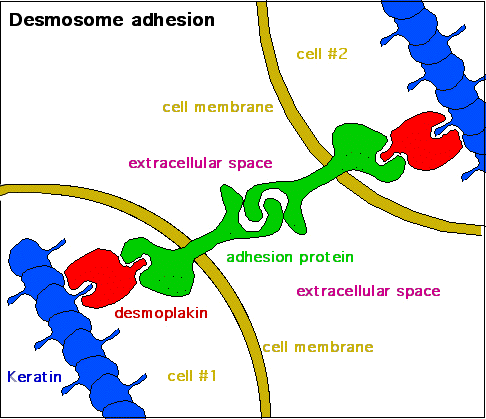 Loss-of-function mutations in keratins lead to the inability of each individual cell to maintain structural integrity under pressure. Mutations in keratin genes can lead to conditions collectively termed epidermolysis bullosa, in which the skin is extraordinarily fragile, blistering, and breaking down with only slight contact. This compromises the patients' first line of defense against infection, the skin (Fig 1-4). 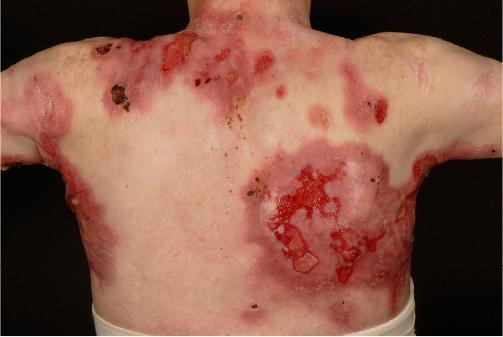 Figure 1-4: Defects in keratin. Image of a patient with epidermolysis bullosa suffering from skin lesions due to mutations in keratin genes. 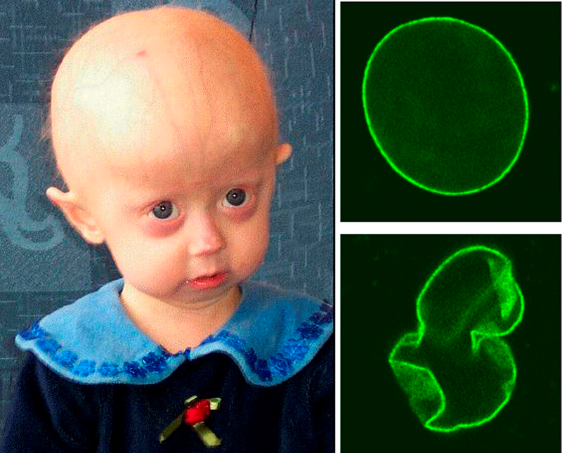 Figure 1-5: Progeria. Image of a patient with progeria (left) and an image of the nuclear lamina (green) in healthy patients (top right) and progeria patients (bottom right).

Microtubules are the thickest type of cytoskeleton with a diameter of 25nm (Fig 1-1) and are found throughout the cytoplasm. These polymers are made up of globular protein subunits called α-tubulin and β-tubulin that attach to the polymer as tubulin dimers. The tubulin dimers stack to form individual protofilaments, thirteen protofilaments associate to form the hollow tube of the final polymerized microtubule (Fig 1-6). 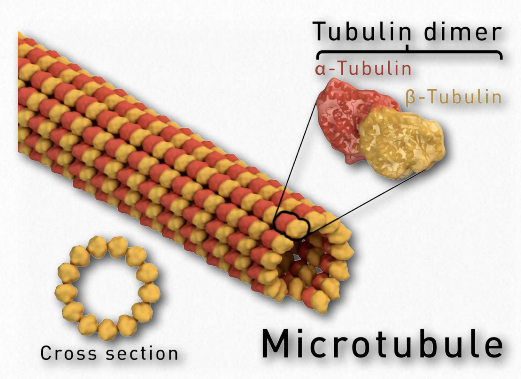 Figure 1-6: Structure of microtubules. Image of the fully assembled microtubule made up of dimers of α-tubulin and β-tubulin stacked to form protofilaments that assemble to form a hollow tube structure.

Both the α-tubulin and β-tubulin subunits bind to GTP. When bound to GTP, the formation of the microtubule can begin, this is called the nucleation event. As more GTP tubulin dimers assemble onto the filament, GTP is slowly hydrolyzed by β-tubulin to form GDP. Tubulin bound to GDP is less structurally robust and can lead to disassembly of the microtubule. Microtubules have a distinct polarity that is critical for their biological function. Tubulin polymerizes end to end, with the β-subunits of one tubulin dimer contacting the α-subunits of the next dimer. These differences lead to different subunits being exposed on the two ends of the filament. The ends are designated the "(−)" and "(+)" ends. Microtubules can elongate at both the "(+)" and "(-)" ends, but elongation is significantly more rapid at the "(+)" end. The ability of the microtubule to assemble and disassemble, thereby changing its length is termed dynamic instability. Note that dynamic instability is a feature specific to microtubules and microfilaments/actin. The breakdown and reformation of nuclear lamins is not a type of dynamic instability. Fig 1-7a demonstrates the disassembly, or shortening, or the microtubules as the protofilaments that make up the hollow microtubule "peel" back.

This dynamic instability is integral for some cellular functions. One example of this is the movement of chromosomes to opposite poles of a dividing cell during mitosis, which is dependent on polymerization and de-polymerization of microtubules, called spindle fibers, that originate from the microtubule organizing center (MTOC) (Fig 1-7b). In addition to their role in mitosis, microtubules facilitate cellular transport by providing pathways for vesicles to be carried through the cell. Microtubules are also the primary structural elements of flagella, cilia, and centrioles.

As previously noted, one function of microtubules is to move cellular components from one part of the cell to another. These cellular components are called "cargo" and are often stored within a vesicle for transport. You can think of the cytoskeleton as "railroad tracks," providing support and directionality inside of the cell.

Of course, if there are "railroad tracks," there needs to be an engine that can both move on the tracks and pull or push cargo along. In this case, the engines are molecular motors, called motor proteins that can move along the tracks in a specific direction. There are two families of molecular motors associated with microtubules; dyneins and kinesins. These motor proteins and the cytoskeleton create a comprehensive network within the cell for moving vesicles from one organelle to another or from one organelle to the cell surface. 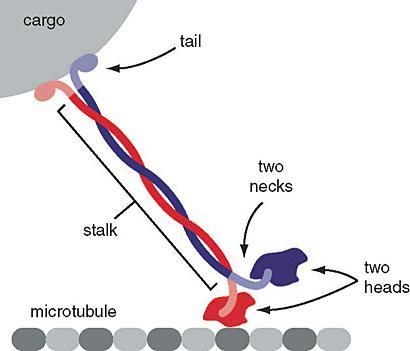 Figure 1-8: Kinesin. The motor protein kinesin (red and blue), has the head portion of the protein "walking" along the microtubule while the 'tails" are bound to vesicles carrying cargo proteins.

Dynein is a second protein complex that functions as a molecular motor. In cells, it converts the chemical energy from ATP hydrolysis into the mechanical energy of movement to 'walk' along the microtubule while carrying a vesicle. Dyneins bind to microtubules and move or "walk" from the plus "(+)" end of the cytoskeletal microtubule filament to the minus "(-)" end of the filament, which is usually oriented towards the cell center. Thus, they are often referred to as minus end-directed motor proteins, moving in the opposite direction as kinesin (Fig 1-9). Cytoplasmic dynein moves progressively along the microtubule, hydrolyzing ATP with each "step" it takes along the microtubule 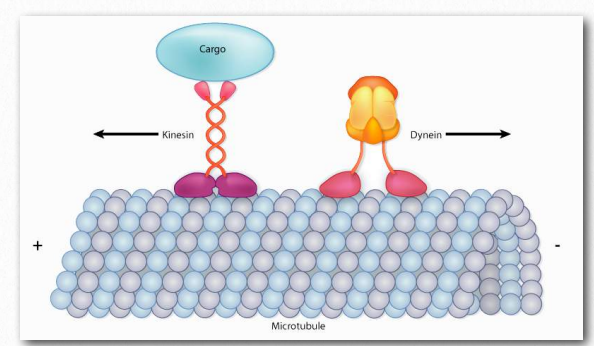 Cytoplasmic dyneins are used in many different processes. They are involved in organelle movement such as the positioning organelles in the cell and are used in the transport of cargo such as the movement of vesicles made by the endoplasmic reticulum, endosomes, and lysosomes.

Microfilaments (also called actin filaments) are cytoskeleton fibers composed of actin subunits. Microfilaments/actin filaments are the thinnest type of cytoskeleton with a diameter of 7nm (Fig 1-1) Actin is one of the most abundant proteins in eukaryotic cells. Actin can be present as either a free monomer that is globular in shape or bound together in a helical polymer (Fig 1-10).

Actin must be bound to ATP to assemble into a polymer. The actin filament itself has structural polarity similar to microtubules. Again, this term "polarity" refers to the fact that there are two distinct ends to the filament. These ends are called the "(-)" end and the "(+)" end. At the "(+)" end, actin subunits are adding onto the elongating filament, and at the "(-)" end, actin subunits are disassembling or falling off of the filament. As seen in microtubules, the ability of the actin filament to assemble and disassemble, thereby changing its length, is termed dynamic instability. This dynamic instability is integral for some cellular functions, including cell crawling, which depends on rapid actin polymerization and de-polymerization. Fig 1-11 demonstrates the role of actin in cell crawling along a surface. Actin polymerization generates the leading edge of the cell, and the resulting cytoskeletal rearrangements allow movement of cells along a surface. 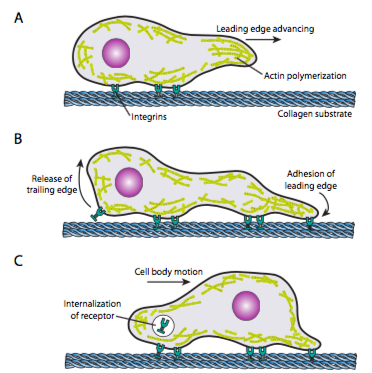 Figure 1-11: Microfilaments/Actin in Cell Crawling. Cells crawl by (a) extending the leading edge primarily through remodeling of the actin cytoskeleton, (b) forming new contacts at that leading edge while releasing contacts on the rear, and (c) movement forward to "catch up" with the leading edge.

Additionally, microfilaments participate in many cellular processes, including muscle contraction, vesicle and organelle movement, the maintenance of cell shape, and formation of the cleavage furrow during cytokinesis. During formation of the cleavage furrow, a contractile ring composed of actin filaments forms just inside the plasma membrane at the former metaphase plate. The actin filaments pull the equator of the cell inward, forming a fissure. This fissure, or "crack," is called the cleavage furrow. The furrow deepens as the actin ring contracts, and eventually, the membrane and cell are cleaved in two (Figure 1-12). Microfilaments are also included in cellular transport since microfilaments can serve as "railroad tracks" for a family of motor proteins called myosins. 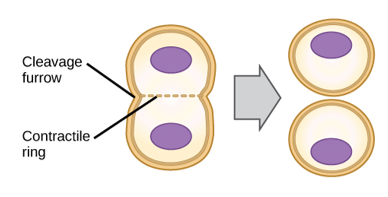 Figure 1-12: The role of actin in cytokinesis. Actin is involved in formation of the cleavage furrow and the contractile ring that helps separate the two daughter cells during cytokinesis

Myosins are a large class of motor proteins that interact with actin/microfilaments. Their movement also uses the energy of ATP hydrolysis to provide energy for the conformational changes needed for movement. While Myosin II is involved in muscle contraction, Myosin I is involved in vesicle movement along microfilaments using the head region of the protein to attach to the actin and the tail region to attach to the vesicle carrying the cargo. Myosin I is also considered a plus-end directed motor protein, carrying vesicles from the (-) end of actin towards the (+) end.