In summary, ions including Na+ and K+ will still have a concentration gradient and the direction of passive transport will not be changed due to the fact that there is also an electrochemical gradient; rather, the force behind it would be slowed if a positively charged ion were being passively transported to the extracellular side of the membrane. 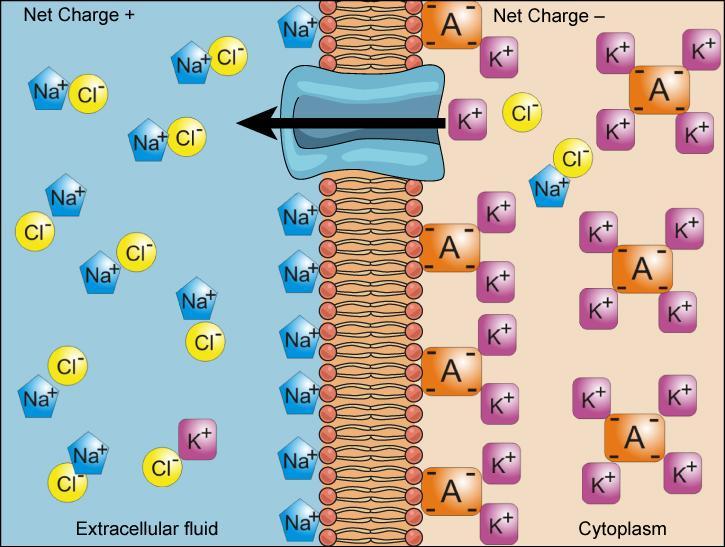 All functions performed by the nervous system—from a simple motor reflex to more advanced functions such as making a memory or a decision—require neurons to communicate with one another. While humans use words and body language to communicate, neurons use electrical and chemical signals. Just like a person in a committee, one neuron usually receives and synthesizes messages from multiple other neurons before "making the decision" to send the message on to other neurons.

Nerve Impulse Transmission within a Neuron

For the nervous system to function, neurons must be able to send and receive signals. These signals are possible because each neuron has a charged cellular membrane, also termed the membrane potential (a voltage difference between the inside and the outside), and the charge of this membrane can change in response to chemicals called neurotransmitters that are released from other neurons and environmental stimuli. To understand how neurons communicate, one must first understand the basis of the baseline or 'resting' membrane potential.

The lipid bilayer that surrounds a neuron is impermeable to charged molecules or ions. Ions must pass through special proteins called ion channels that span the membrane to enter or exit the neuron. Ion channels have different configurations: open, closed, and inactive, as illustrated in Figure 8-2. Some ion channels need to be activated to open and allow ions to pass into or out of the cell. These ion channels are sensitive to the environment and can change their shape accordingly. Ion channels that change their structure in response to differences in voltage, or changes in membrane potential are called voltage-gated ion channels. Voltage-gated ion channels regulate the relative concentrations of different ions inside and outside the cell.

A resting neuron has a negatively charged cytoplasm. The interior of the cell is approximately 70 millivolts more negative than the outside (−70 mV, note that this number varies by neuron type and by species). The negative charge within the cell is created by the increased permeability of the cell membrane to potassium ion movement than the sodium ion movement. In neurons, potassium ions are maintained at high concentrations within the cell, while sodium ions are at high concentrations outside of the cell. The cell possesses potassium and sodium leakage channels that allow the two cations to diffuse down their concentration gradient. However, neurons have far more potassium leakage channels than sodium leakage channels. Therefore, potassium diffuses out of the cell at a much faster rate than sodium leaks inside. Because more cations are leaving the cell than are entering, this causes the interior of the cell to be negatively charged relative to the outside of the cell. This difference in voltage is the resting membrane potential (Figure 8-3). Therefore, the negative resting membrane potential is created and maintained by increasing the concentration of cations outside the cell (in the extracellular fluid) relative to inside the cell (in the cytoplasm). Alternatively, if the membrane were equally permeable to all ions and there was no way to pump ions against their concentration gradient, each type of ion would flow across the membrane, and the system would reach equilibrium (0 mV). Because ions cannot simply cross the membrane at will, there are different concentrations of several ions inside and outside the cell, as shown in the table below.

The actions of the sodium-potassium pump help to maintain the resting potential, once established. Recall that the sodium-potassium pump transports two K+ ions into the cell while removing three Na+ ions per ATP consumed (See Chapter 7). As more cations are expelled from the cell than taken in, the inside of the cell becomes more negatively charged relative to the extracellular fluid.

Table 8-1: Ion Concentration Inside and Outside the Plasma membrane of Neurons. 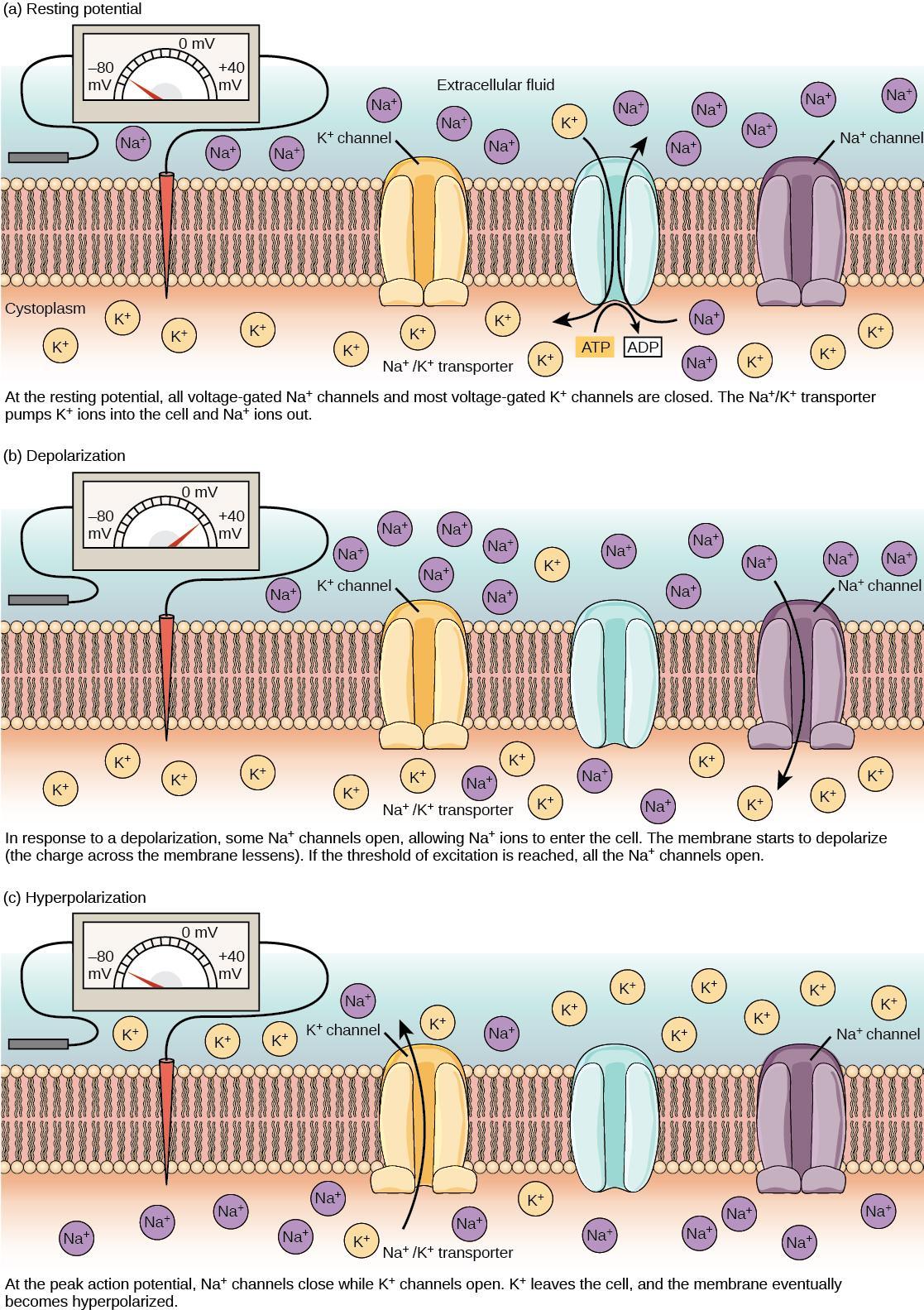 Figure 8-3: Polarization of the plasma membrane. The (a) resting membrane potential is a result of different concentrations of Na+ and K+ ions inside and outside the cell. A nerve impulse causes Na+ to enter the cell, resulting in (b) depolarization. At the peak action potential, K+ channels open, and the cell becomes (c) hyperpolarized. 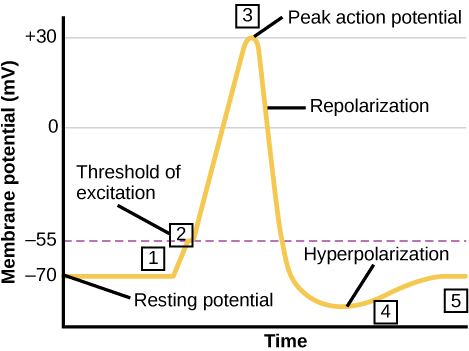 Figure 8-4: Action Potential. The formation of an action potential in five steps: (1) A stimulus from a sensory cell or another neuron causes the target cell to depolarize toward the threshold potential by causing ligand-gated Na+ channels to open. (2) If the threshold of excitation is reached, this causes voltage-gated Na+ channels open, and the membrane depolarizes. (3) At the peak action potential, voltage-gated K+ channels open and K+ begins to leave the cell. At the same time, Na+ channels close. (4) The membrane becomes hyperpolarized as K+ ions continue to leave the cell. The hyperpolarized membrane is in a refractory period and cannot fire. (5) The K+ channels close, and the Na+/K+ transporter restores the resting potential. 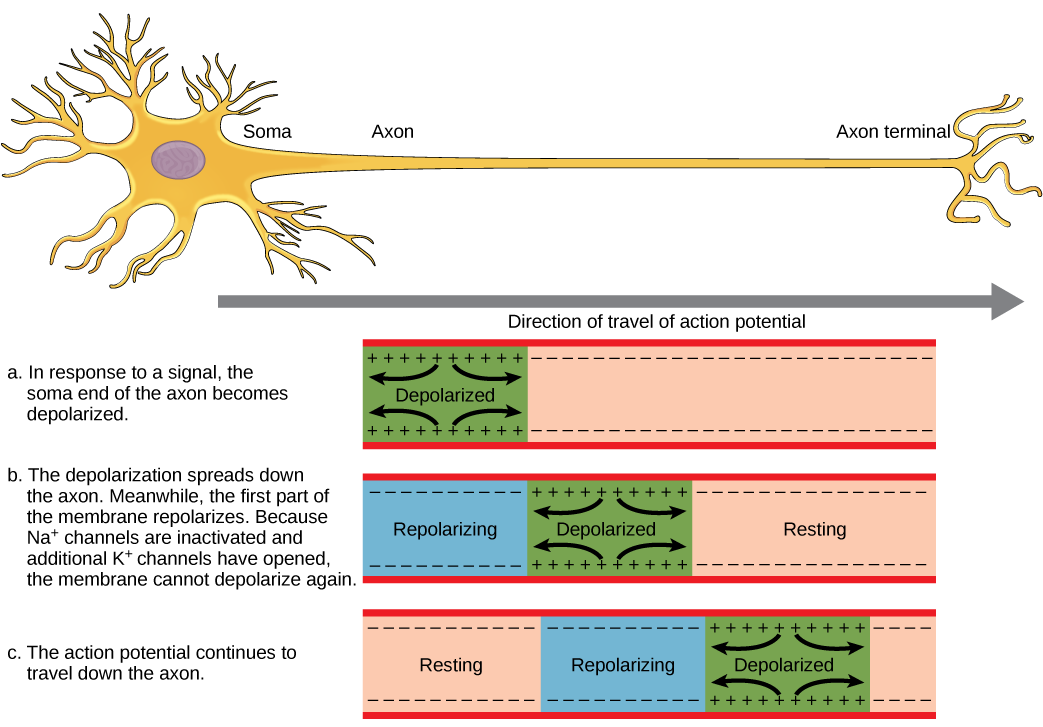 Myelin and the Propagation of the Action Potential

Transmission from one neuron to another occurs in the synapse. Synapses usually form between axon terminals and dendritic spines, but this is not universally true. There are also axon-to-axon, dendrite-to-dendrite, and axon-to-cell body synapses. The neuron transmitting the signal is called the presynaptic neuron, and the neuron receiving the signal is called the postsynaptic neuron. Note that these designations are relative to a particular synapse. Most neurons are both presynaptic and/or postsynaptic, depending on location in the neural pathway. There are two types of synapses: chemical and electrical.

When an action potential reaches the axon terminal, it depolarizes the membrane and opens voltage-gated Na+ channels. Na+ ions enter the cell, further depolarizing the presynaptic membrane. This depolarization causes voltage-gated Ca2+ channels to open. Calcium ions entering the cell initiate a signaling cascade that causes small membrane-bound vesicles, called synaptic vesicles, containing neurotransmitter molecules to fuse with the presynaptic membrane. Synaptic vesicles are shown in Figure 8-6, which is an image from a scanning electron microscope. The axon terminal is spherical. A section is sliced off, revealing small blue and orange vesicles just inside. 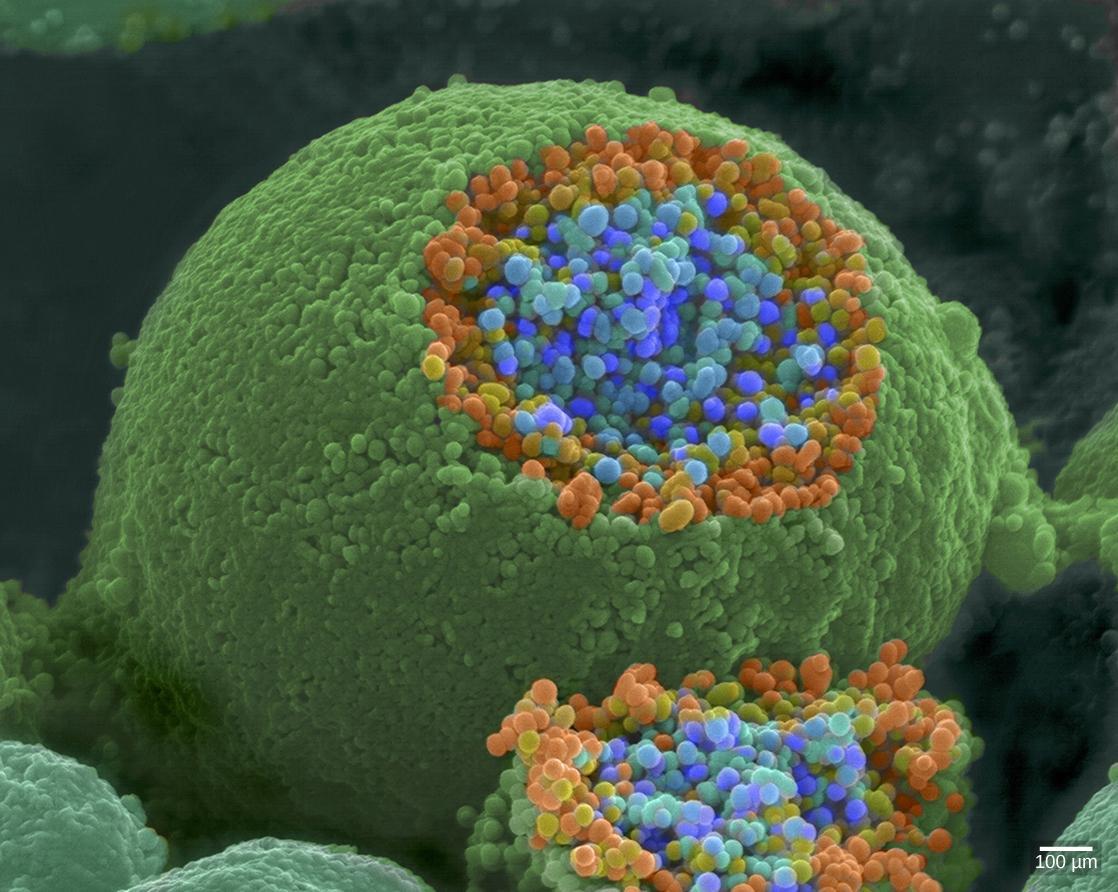 Figure 8-7 shows a narrow axon of a presynaptic cell widening into a bulb-like axon terminal. A narrow synaptic cleft separates the axon terminal of the presynaptic cell from the postsynaptic cell. In step 1, an action potential arrives at the axon terminal (electrical signal). In step 2, the action potential causes voltage-gated calcium channels in the axon terminal to open, allowing calcium to enter. In step 3, calcium influx causes neurotransmitter-containing synaptic vesicles to fuse with the plasma membrane. Contents of the vesicles are released into the synaptic cleft by exocytosis (chemical signal). In step 4, neurotransmitter diffuses across the synaptic cleft and binds ligand-gated ion channels on the postsynaptic membrane, causing the channels to open (See Chapter 8). In step 5, the open channels cause ion movement into or out of the cell, resulting in a localized change in membrane potential (electrical signal). In step 6, reuptake by the presynaptic neuron, enzymatic degradation, and diffusion reduce neurotransmitter levels, terminating the signal. 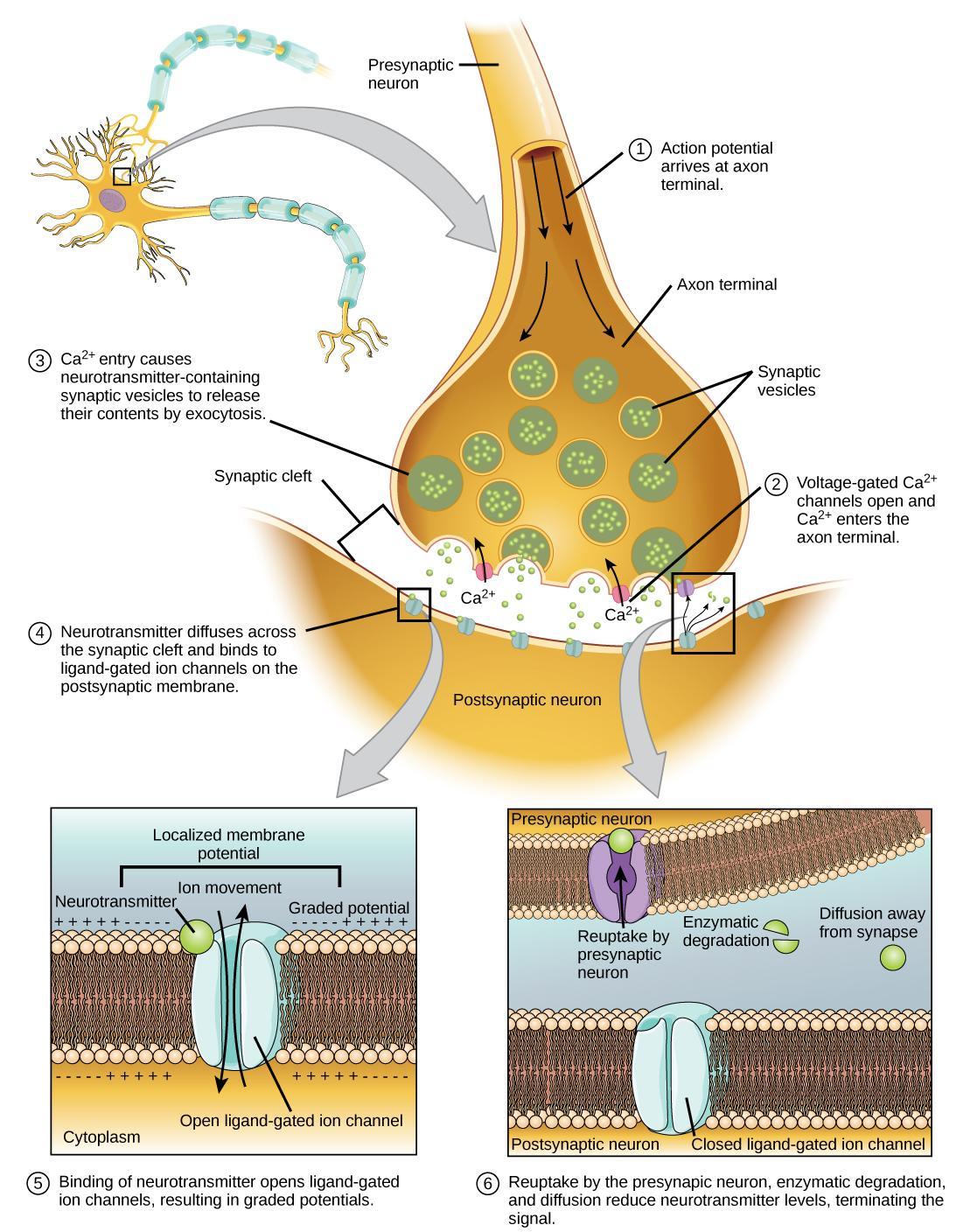 Figure 8-7: Synapse communication. Communication at chemical synapses requires the release of neurotransmitters. When the presynaptic membrane is depolarized, voltage-gated Ca2+ channels open and allow Ca2+ to enter the cell. The calcium entry causes synaptic vesicles to fuse with the membrane and release neurotransmitter molecules into the synaptic cleft. The neurotransmitter diffuses across the synaptic cleft and binds to ligand-gated ion channels in the postsynaptic membrane, resulting in a localized depolarization or hyperpolarization of the postsynaptic neuron.

Neurons have charged membranes because there are different concentrations of ions inside and outside of the cell. Voltage-gated ion channels control the movement of ions into and out of a neuron. When the depolarization of the neuronal membrane to at least the threshold of excitation, an action potential fires. The action potential propagates along a myelinated axon to the axon terminals. In a chemical synapse, the action potential causes the release of neurotransmitter molecules into the synaptic cleft. Through binding to postsynaptic receptors, the neurotransmitter can cause excitatory or inhibitory postsynaptic potentials by depolarizing or hyperpolarizing, respectively, the postsynaptic membrane. In electrical synapses, the action potential communicates directly to the postsynaptic cell through gap junctions, which are large channel proteins that connect the pre-and postsynaptic membranes. Synapses are not static structures and can be strengthened and weakened.