After transcription and translation, proteins may need to be shipped, or “trafficked”, to specific locations within the cell. When a ribosome begins translating an mRNA, the cell still needs instructions on where to send the new protein so that it may carry out its ultimate function. Those instructions are in signal sequences, specific amino acid sequences within the translated protein that have specific properties based on the biochemistry of the particular amino acids. Most signal sequences are found at the N-terminus of proteins; however, signal sequences can also be found at the C-terminus and in internal locations within the protein.

Signal sequences direct the protein from the cytoplasm to a particular organelle. For eukaryotes, there are specific signal peptides that can direct the protein to the nucleus, to the mitochondria, to the endoplasmic reticulum and other organelles. The signal sequences are specifically recognized by receptors that are soluble or membrane-bound. Receptors are soluble for import into the nucleus, but for delivery to the mitochondria, ER or other organelles receptors are located within the membranes of cellular compartments. These receptors help guide the insertion of the protein into or through the membrane. Almost all protein synthesis in eukaryotes is carried out in the cytoplasm using mRNA generated from the genomic DNA. An exception are a few proteins in the chloroplasts and mitochondria that are self-generated using their own DNA and ribosomes). Proteins found in any other compartment or embedded in any membrane must have been delivered to that compartment by its signal sequence. 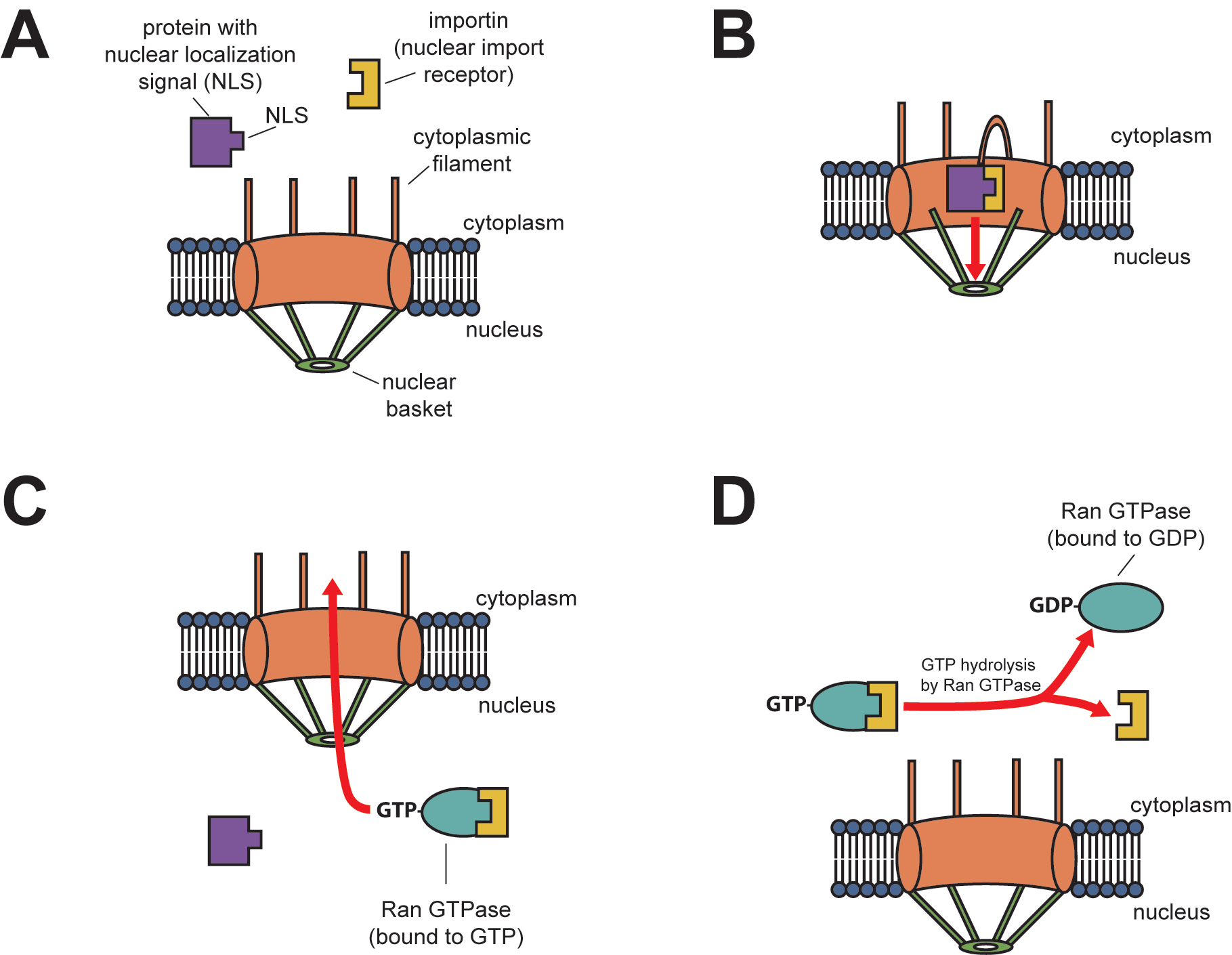 Figure 9-1: Transport through the nuclear pore. A) The NLS is recognized by the importin nuclear transport receptor. B) The complex is moved into the nucleus. C) Ran-GTP facilitates the dissociation of the complex. D) Ran-GTP and other associated proteins are exported and Ran-GTP is hydrolyzed to Ran-GDP in the cytoplasm to release importin.

Once the complex of the cargo protein containing the NLS and the importin proteins/nuclear transport receptors are moved into the nucleus, binding of Ran-GTP, a small GTPase, causes the complex of proteins to dissociate (Figure 1c). The imported cargo protein is released in the nucleus. The importins are also released in the nucleus, but they are exported back out through the nuclear pore to be reused with another protein targeted for the nucleus. The Ran-GTP is also a part of the export complex (Figure 1d), once in the cytoplasm, the hydrolysis of GTP to GDP by Ran (activated by Ran-GAP, a cytoplasmic protein) provides the energy to dissociate the cargo (e.g. mRNA) from the importin. The Ran-GDP then binds to importins, re-enters the nucleus, and the GDP is exchanged for GTP, repeating the cycle of nuclear import for proteins with a nuclear localization sequence. 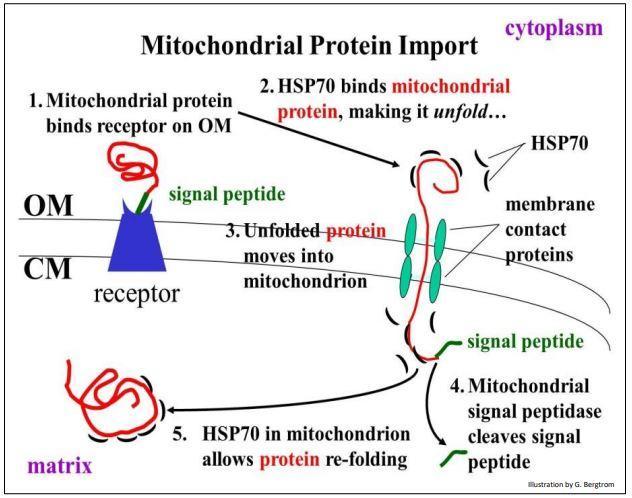 Transport to the endoplasmic reticulum

Functional proteins destined for the endoplasmic reticulum (smooth and rough), the Golgi apparatus, the lysosome, the cell membrane or to be secreted from the cell, are targeted differently than those previously discussed. These proteins are targeted to the rough endoplasmic reticulum early in translation so that they complete translation in the RER, and then be packaged into vesicles for transport through the Golgi and then to their final location. Here, in addition to an ER N-terminal signal sequence which directs the ribosome to the RER, the position of secondary internal signal sequences (sometimes called signal patches or stop sequences) helps to determine the disposition of the protein as it enters the ER. The ER signal sequence is a series of hydrophobic amino acids that will become lodged in the hydrophobic portion of the ER membrane once delivered.

The initial insertion requires recognition of the ER signal sequence by SRP, the signal recognition particle. The SRP is a GTPase and exchanges its bound GDP for a GTP upon binding to a protein’s ER signal sequence. It binds both the ER signal sequence and the ribosome during translation of the protein, which is a different mechanism from the ones used for nuclear and mitochondrial import, which are imported post-translationally. The SRP usually binds as soon as the signal sequence is available, and when it does so, it arrests translation until it is docked to the ER membrane. The SRP with its attached protein and ribosome then docks to a receptor (called the SRP receptor) embedded in the ER membrane and extending into the cytoplasm. Incidentally, this is the origin of the “rough” endoplasmic reticulum: the ribosomes studding the ER are attached during translation to the ER cytoplasmic surface by the nascent polypeptide it is producing and an SRP. The SRP receptor can exist on its own or in association with a translocon, which is a translocation channel. The SRP receptor (SR) is also a GTPase, and is usually carrying a GDP molecule when unassociated. However, upon association with the translocon it exchanges its GDP for a GTP. These GTPs are essential because when the SRP binds to the SRP Receptor, both GTPase activities are activated and the resulting release of energy dissociates both from the translocon and the nascent polypeptide. This relieves the block on translation imposed by the SRP, translation restarts, and the new protein is pushed on through the translocation channel in a linearized, or unfolded state as it is being synthesized. Once the N-terminal signal sequence has completely entered the lumen of the ER, it reveals a recognition site for signal peptidase, a hydrolytic enzyme that resides in the ER lumen and whose purpose is to snip off the signal peptide. Note that the N-terminus of the ER targeted protein is delivered through the translocation channel first, thereby allowing proper removal of the hydrophobic N-terminal signal sequence prior to protein folding (Fig 9-3). 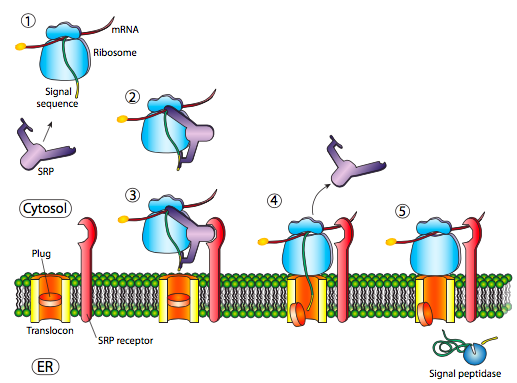 Figure 9-3: SRP and its receptor SR mediate movement of proteins through the ER membrane. The SRP recognizes the signal sequence and binds to it and the ribosome, temporarily arresting translation. The SRP-polypeptide-ribosome complex is bound by its receptor, SR, which positions the complex on a translocon. Once the ribosome and polypeptide are docked on the translocon, the SRP dissociates, and translation resumes, with the polypeptide moving through the translocon as it is being synthesized.

If there is a significant stretch of mostly-uninterrupted hydrophobic residues, it would be considered a stop-transfer signal, as that part of the proteican get stuck in the translocation channel (and subsequently the ER membrane) forcing the remainder of the protein to remain outside the ER. This generates a protein that inserts into the membrane once, with its N-terminus in the ER lumen and the C-terminus in the

cytoplasm, called a single-pass protein. In a multi-pass transmembrane protein, there could be several start- and stop- transfer hydrophobic signal patches. 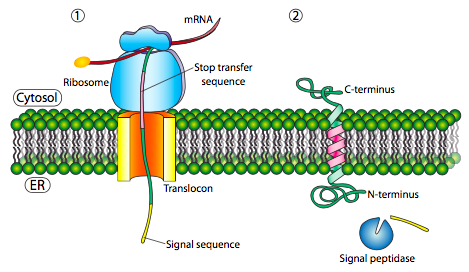 Figure 9-4: Single-pass transmembrane protein insertion. (1) The signal sequence has allowed the ribosome to dock on a translocon and newly made polypeptide is threaded through until the stop-transfer sequence. (2) The hydrophobic stop transfer sequence gets “stuck” in the membrane, forcing the rest of the polypeptide to stay in the cytoplasm as it is translated.

Building on the single-pass example, if there were another signal patch after the stop-transfer sequence, it would act as a start-transfer sequence, attaching to a translocon and allowing the remainder of the protein to be moved into the ER. This results in a protein with both N- and C- termini in the ER lumen, passing through the ER membrane twice, and with a cytoplasmic loop sticking out (Fig 9-5).

Figure 9-5: Insertion of double-pass transmembrane protein. After the initial stop transfer sequence is embedded in the membrane, a start transfer sequence instructs the remainder of the peptide to be fed through the translocon, resulting in a protein with both N-terminus and C-terminus facing the lumen.

Chapter 10 - Vesicles in the Endomembrane System