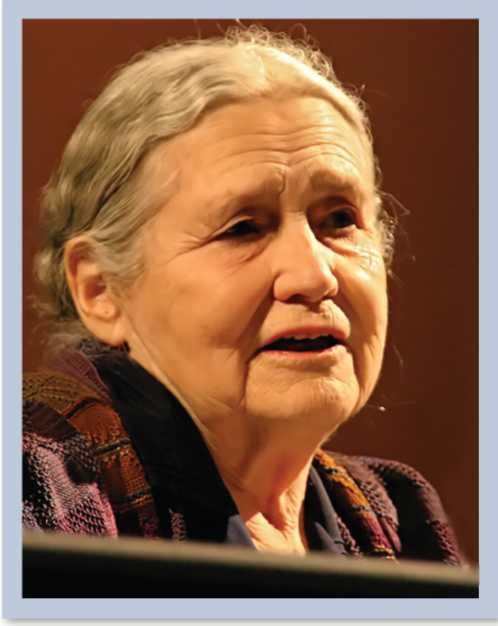 Doris Lessing was born in Kermanshah, Persia (now Iraq), where her father worked as a clerk in the Imperial Bank of Persia. In 1925, the family moved to Southern Rhodesia (now Zimbabwe) to take up maize farming. Lessing was educated first at a convent school then at the Dominican Convent High School, an all-girls high school in Salisbury, from which she dropped out at the age of thirteen. From that point on, she became an autodidact, reading books ordered from London, by authors such as Dickens, D. H. Lawrence, and Woolf. She was also shaped by her mother’s constant pressure for British propriety and conventionality and her father’s bitter accounts of WWI.

At the age of fifteen, Lessing left home to work as a nursemaid and started writing professionally. After moving to Salisbury, she worked as a telephone operator and married Frank Wisdom; they had two children. Oppressed by the institution of marriage, into which she felt that women sank and disappeared, Lessing left her family but continued to live in Salisbury. Her interest in politics drew her to Communism and Socialism. She joined the Left Book Club and married one of its members, Gottfried Lessing; the two had a son. In 1949, she left this marriage and moved to London, taking her youngest son Peter with her. There, she pursued her writing and published her novel The Grass is Singing (1950), an account of a white couple who struggle at farming, their black servant Moses, and the overt, often cruel racism of the whites against the blacks. The physical and mental deterioration of the wife, Mary Turner, particularly highlights the artificiality and hypocrisy of the “colour bar.”

Lessing continued to use her experiences in and views of Africa, particularly her opposition to apartheid, as material for her writing, through which she developed her views on politics, cultural clashes, and racial and gender inequalities. The act of writing allowed her to distance herself from cultural and social pressures that coercively shape the individual and to explore identity and the individual’s place in society. In a series of psychological novels, The Children of Violence (1952-1969), she followed the developing consciousness of Martha Quest and the dystopian future of England. Her The Golden Notebook (1962) manifested the multiple and multivalent selves of a single woman resisting the pressures and repressions of her society with the force and freedom of a man. The book uses a postmodern, achronological structure that intersects “realistic” narrative with journal entries recording external and internal events. Although playful and even absurdist, the book considers themes of continuing relevance, including societal fragmentation, the threat of nuclear destruction, and women’s struggle for physical, emotional, and mental integrity in a society that often denies them any such integrity at all, let alone autonomy.

Lessing continued to write until the end of her life, employing various genres, including science fiction and opera, as well as diverse personas (for instance, writing under the pseudonym of Jane Somers). In 2007, she won the Novel Prize for Literature.