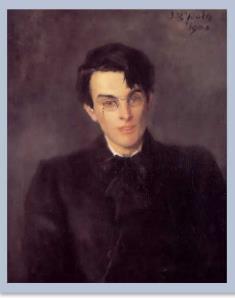 William Butler Yeats was born into an artistic Protestant family in Dublin, Ireland. Though his family was sympathetic to English rule, Yeats early on interested himself in Irish history, culture, politics, and governmental autonomy. His earliest poetry drew upon Celtic mythology, culminating in a literary movement called The Celtic Twilight that promoted Irish fairy tales and folklore.

Another group in which Yeats participated was the Theosophical Society, founded by Madame Blavatsky (1831-1891). This spiritualist group studied the occult, the cabala, and Eastern religions. Yeats expanded his interest in spiritualism and the occult when he left the Theosophical Society and joined the Order of the Golden Dawn, a society purporting to practice ancient magic.

Yeats’s personal interests in Ireland and the occult found beautiful expression in his early and middle periods of writing, with the publication of such collections of poetry as The Secret Rose (1897) and The Wind Among the Reeds (1899). Another subject of his poetry was his unrequited love for Maud Gonne (1866-1953), an Irish nationalist who eventually married the Irish Revolutionary John MacBride (1868-1916), one of the fifteen Irish rebels executed by the British for participating in the Easter Rising.

The Easter Rising inspired both Yeats’s poem “Easter, 1916” and his return to Ireland. He had been living there sporadically through his co-founding—with Lady Gregory (1852-1932) and Edward Martyn (1859-1923)—and managing of the Abbey Theatre, a nationalist theater in Dublin. Besides poetry, Yeats wrote several dramas, the later ones of which were influenced by the Noh drama of Japan. Many features of this drama found their way into Yeats’s poetic work, particularly the image of the dancer, symbolism, and the use of the mask.

Yeats’s later poetry remained personal; however, he developed his own System of symbols that conveyed his spiritualist vision in concrete terms. He established his System in his book A Vision (1925), which drew upon the automatic writing of the woman he ultimately married, Georgiana Hyde-Lees (1892-1968). His System conflated individual and historical development. With the Wheel, Yeats diagrammed the opposing forces that determine individual and historical progress and change: primary and antithetical, objective and subjective, a moral cycle and an aesthetic cycle, the Christian God and pagan nature, the pulpit and the altar. Within these forces, the individual struggles to find personality, taking life at certain phases that follow the phases of the moon. Art, the perfection of art that balances spirit and body, movement and stasis, occurs at Phase 15, the Full Moon. At Phase 15, all thought is perfectly embodied. According to Yeats’s system, the Renaissance era and Byzantium are at Phase 15. 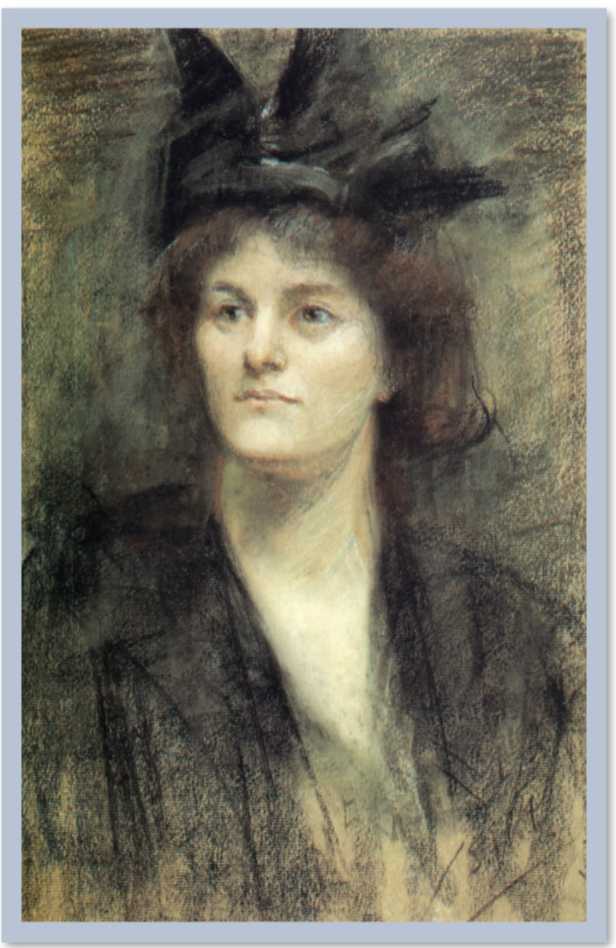 As one phase/era ends, another begins, a process Yeats symbolizes through the turning of a perne in a gyre. A civilization has its distinctive character only at its height. When it declines, it crumbles into its opposite, just like human personality. But gyres refer more to civilizations than to people. Gyres are the equivalent of the Wheel. Revelation, the union of god and woman (Mary, Leda), brings in new civilization. Many of Yeats’ poems draw upon this System, including “Leda and the Swan,” “The Second Coming,” “Among School Children,” “Sailing to Byzantium,” and “Byzantium.”

Yeats’s life and work received increasing attention as he aged, with his being appointed as Senator to the Irish Free State in 1922 and his winning the Nobel Prize for Literature in 1923.

I will arise and go now, and go to Innisfree,

And a small cabin build there, of clay and wattles made:

Nine bean-rows will I have there, a hive for the honey-bee;

And live alone in the bee-loud glade.

And I shall have some peace there, for peace comes dropping

Dropping from the veils of the morning to where the cricket

There midnight’s all a glimmer, and noon a purple glow,

And evening full of the linnet’s wings.

I will arise and go now, for always night and day

I hear lake water lapping with low sounds by the shore;

While I stand on the roadway, or on the pavements grey,

I hear it in the deep heart’s core.

The trees are in their autumn beauty,

The woodland paths are dry,

Under the October twilight the water

Upon the brimming water among the stones

Are nine and fifty swans.

The nineteenth Autumn has come upon me

Since I first made my count;

I saw, before I had well finished,

Upon their clamorous wings.

I have looked upon those brilliant creatures,

And now my heart is sore.

All’s changed since I, hearing at twilight,

The first time on this shore,

The bell-beat of their wings above my head,

Trod with a lighter tread.

I have met them at close of day

From counter or desk among grey

I have passed with a nod of the head

Or have lingered awhile and said

And thought before I had done

Of a mocking tale or a gibe

To please a companion

Around the fire at the club,

Being certain that they and I

But lived where motley is worn:

That woman’s days were spent

Her nights in argument

Until her voice grew shrill.

What voice more sweet than hers

When, young and beautiful,

She rode to harriers?

This man had kept a school

And rode our wingèd horse;

This other his helper and friend

Was coming into his force;

So sensitive his nature seemed,

So daring and sweet his thought.

This other man I had dreamed

He had done most bitter wrong

To some who are near my heart,

Yet I number him in the song;

He, too, has resigned his part

In the casual comedy;

He, too, has been changed in his turn,

Hearts with one purpose alone

Through summer and winter seem

Enchanted to a stone

To trouble the living stream.

The horse that comes from the road,

The rider, the birds that range

From cloud to tumbling cloud,

Minute by minute they change;

A shadow of cloud on the stream

A horse-hoof slides on the brim,

And a horse plashes within it;

And hens to moor-cocks call;

Minute to minute they live;

The stone’s in the midst of all.

Too long a sacrifice

Can make a stone of the heart.

O when may it suffice?

That is Heaven’s part, our part

To murmur name upon name,

As a mother names her child

When sleep at last has come

On limbs that had run wild.

What is it but nightfall?

No, no, not night but death;

Was it needless death after all?

For England may keep faith

For all that is done and said.

We know their dream; enough

To know they dreamed and are dead;

And what if excess of love

Bewildered them till they died?

I write it out in a verse—

And Connolly and Pearse

Now and in time to be,

Wherever green is worn,

Turning and turning in the widening gyre

The falcon cannot hear the falconer;

Mere anarchy is loosed upon the world,

The blood-dimmed tide is loosed, and everywhere

The ceremony of innocence is drowned;

The best lack all conviction, while the worst

Are full of passionate intensity.

Surely some revelation is at hand;

Surely the Second Coming is at hand.

The Second Coming! Hardly are those words out

When a vast image out of Spiritus Mundi

Troubles my sight: somewhere in sands of the desert

A shape with lion body and the head of a man,

A gaze blank and pitiless as the sun,

Is moving its slow thighs, while all about it

The darkness drops again; but now I know

That twenty centuries of stony sleep

Were vexed to nightmare by a rocking cradle,

And what rough beast, its hour come round at last,

Slouches towards Bethlehem to be born?

Above the staggering girl, her thighs caressed

By the dark webs, her nape caught in his bill,

He holds her helpless breast upon his breast.

How can those terrified vague fingers push

The feathered glory from her loosening thighs?

And how can body, laid in that white rush,

But feel the strange heart beating where it lies?

A shudder in the loins engenders there

The broken wall, the burning roof and tower

Being so caught up,

So mastered by the brute blood of the air,

Did she put on his knowledge with his power

Before the indifferent beak could let her drop?

That is no country for old men. The young

In one another’s arms, birds in the trees

—Those dying generations—at their song,

Whatever is begotten, born, and dies.

Caught in that sensual music all neglect

An aged man is but a paltry thing,

A tattered coat upon a stick, unless

Soul clap its hands and sing, and louder sing

For every tatter in its mortal dress,

Nor is there singing school but studying

Monuments of its own magnificence;

And therefore I have sailed the seas and come

To the holy city of Byzantium.

As in the gold mosaic of a wall,

Come from the holy fire, perne in a gyre,

And be the singing-masters of my soul.

Consume my heart away; sick with desire

And fastened to a dying animal

It knows not what it is; and gather me

Into the artifice of eternity.

Once out of nature I shall never take

My bodily form from any natural thing,

But such a form as Grecian goldsmiths make

Of hammered gold and gold enamelling

To keep a drowsy Emperor awake;

Or set upon a golden bough to sing

To lords and ladies of Byzantium

Of what is past, or passing, or to come.