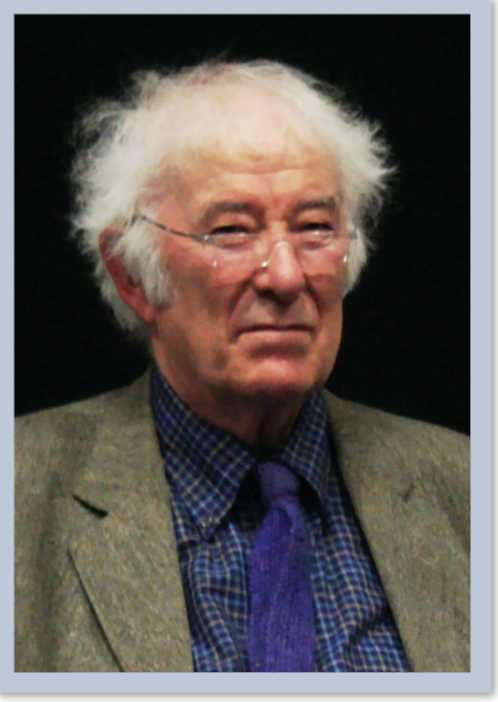 Seamus Heaney was born into a farming family in Northern Ireland to Patrick Heaney and Margaret Kathleen. He studied at Anahorish Primary School then won a scholarship to study at St. Columb’s College in Derry. In 1961, Heaney earned his BA in English Language and Literature at Queens University, Belfast. His course of study there sparked his interest in writing poetry. He prepared for a teaching career at St. Joseph’s Teacher Training College, Belfast. He nurtured his writing career at his first teaching post at St Thomas secondary Intermediate School in West Belfast through the mentorship of its headmaster, the writer Michael McLaverty, who encouraged Heaney to publish his poetry.

Heaney then lectured at St. Joseph’s, where he joined a coterie of young Irish poets, and published his first book, Eleven Poems (1965), for the Queen’s University Festival. His first collection of poetry, Death of a Naturalist (1966), was well-received and followed by an appointment as lecturer in Modern English Literature at Queen’s University Belfast. After he published his second poetry collection, Door into the Dark (1969), Heaney wrote full time, while occasionally accepting teaching positions at prestigious universities in Ireland and America.

Heaney identified as Irish rather than British. His importance and commitment to Irish literature appears in his being elected to the National Irish Arts Council, ultimately being elected as one of its five elders; serving on the Board of Directors of the Field Day Theatre Company; being named Honorary Fellow of the Royal Society of Literature; becoming a member of the Royal Irish Academy; and being named an Honorary Fellow of Trinity College, Dublin.

Besides poetry, Heaney published critical essays; translations of the Aeneid and Beowulf, among others; and plays. In 1995, he won the Nobel Prize for Literature. His poetry often draws on personal experiences, like his brother’s accidental death, both his parents’ dying within two years of each other, and his recovery from stroke; and on resonating places, like Northern Ireland; and is characterized by its often simple, even parochial, diction; beautiful sound patterns; concrete details of the everyday; and blending of the personal and mythical.