In this chapter, we present an overview of basic computer organization and representation of data in computers.

Hardware: Physical parts of a computer. Everything you can touch.

Transistor: A tiny electrically operated switch that can alternate between “on” and “off”. Fig. 1-1 shows a transistor which has three pins.

Chip (Microchip): A tiny piece of silicon that contains millions of transistors and other electronic components, as shown in Fig. 1-2. Your CPU (Central Processing Unit) is one of Microchips. 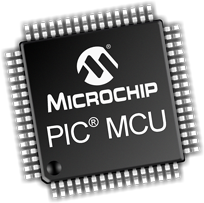 Typical Personal Computer System consists of lots of components, as shown in Fig. 1-3: 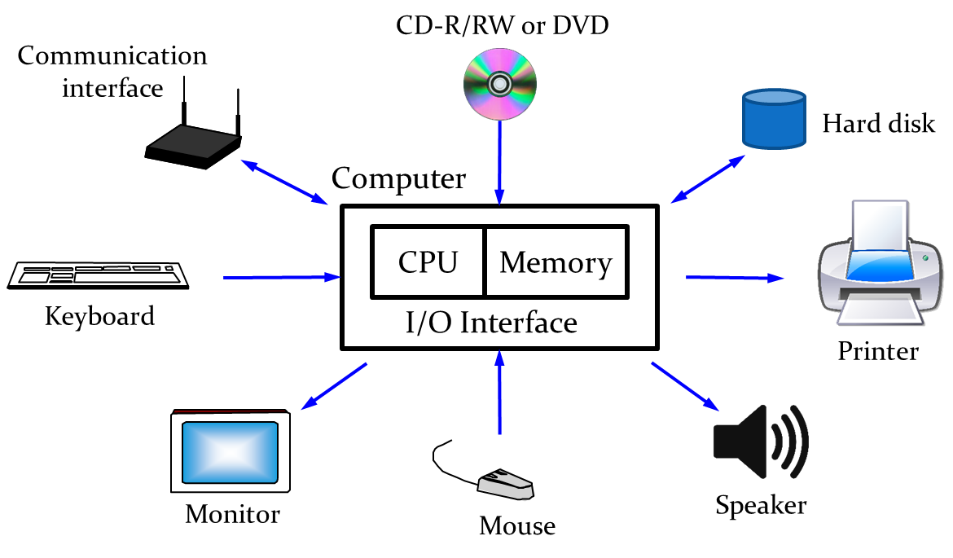 In digital discipline, there are two discrete values:

Decimal numbers can be expressed as shown in Fig. 1-4. The rightmost digit represents 1’s column. As the digit moves forward to left-side, the weight of each digit increases as the power of 10. In the figure, we can read the number, as follows: five thousand, three hundred, seven ten, and four one.

A binary number also can be expressed as shown in Fig. 1-5. Here, the rightmost digit represents 1’s column. As the digit moves forward to left-side, the weight of each digit increases as the power of 2. In the figure, we have a binary number 1101. Each bit represents a different weight, the first bit (1) for 8’s column, the second one (1) for 4’s column, the third one (0) for 2’s column, and the last one (1) for 1’s column. 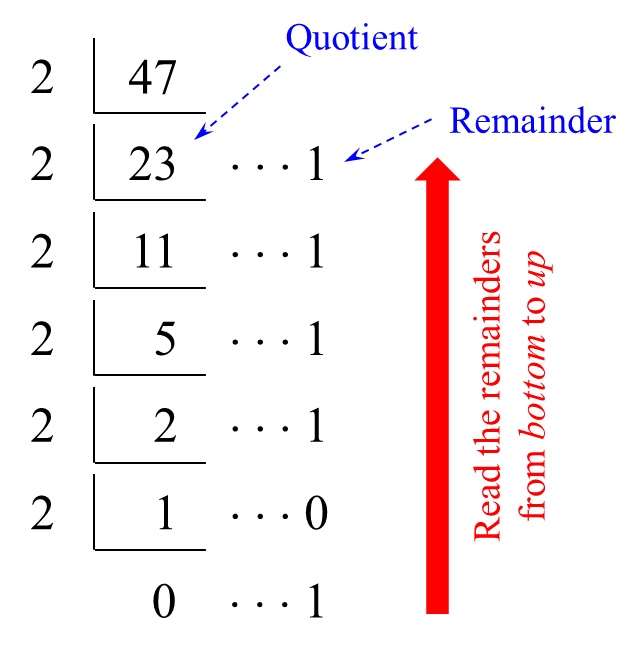 Let’s convert the decimal number 47 to a binary number. We can start to divide the number with the divisor, where the divisor is always 2. You will the quotient 23 and a remainder 1. Keep repeat this process until the dividend becomes zero, as shown in Fig. 1-6. Now let’s read the remainders from bottom to up, 101111 is the binary representation of the decimal number 47.

The bit is the most basic unit of information in computing and digital communications.

The large powers of two can be expressed as shown below:

There are two ways of representation of signed numbers, i.e. sign-magnitude form and two’s complement form.

For example, let’s represent +6 and -6 with 4-bit sign-magnitude form. The absolute value for both numbers is equal to

One of problem in this form is that the addition doesn’t work. If you add these two number as shown below, the result is not correct.

You can find some YouTube video how to convert the number into two’s complement number in the following link: