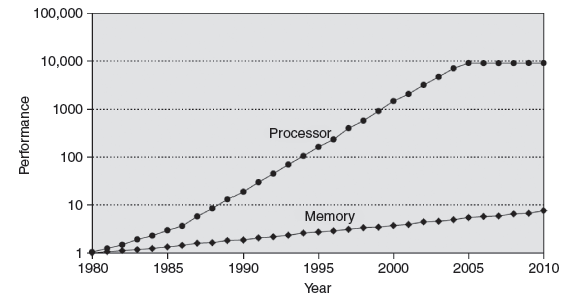 The ideal memory has the following characteristics: 1) it should be fast and cheap (inexpensive); and 2) it should have a large capacity to store data in term of volume. But in reality, we cannot choose the one that meets all the requirement. If we choose one of the fastest one, it will be expensive and have limited capacity. If we choose one with the largest capacity, it will be slow.

There are three memory types in the memory hierarchy, i.e. cache, main memory, virtual memory, as shown below:

The memory hierarchy uses the locality to speed up the performance of the memory. There are two types of locality; one is temporal locality, and the other one is spatial locality.

Temporal Locality uses the locality in time. If the data is used recently, the processor may use it again soon. By keeping recently accessed data in higher levels of memory hierarchy, the processor can access the data immediately.

We take advantage of principle of locality by implementing the memory of a computer as a memory hierarchy.

When the data is not found in that level of memory hierarchy, it is called as miss. It may take time to go to the next level, called as miss penalty. The fraction or percentage of accesses that result in a miss is called the miss rate, expressed as the following equation:

SRAMs are Integrated circuits that are memory arrays with (usually) a single access port. SRAM has a fixed access time to any datum. It doesn’t need to refresh and so the access time is very close to the cycle time. Typically, it uses six to eight transistors per bit to prevent the information from being disturbed when reading the data. It costs a lot.

DRAMs store data as a charge in a capacitor, where a single transistor is used to access the charge. That’s why it is much denser and cheaper per bit than SRAM. However, the data cannot be kept indefinitely and must periodically be refreshed, call ‘dynamic’.

The above table shows how DRAM generations gradually developed from 1980s.

Disk storage (also sometimes called drive storage) is a general category of storage mechanisms where data is recorded by various electronic, magnetic, optical, or mechanical changes to a surface layer of one or more rotating disks. 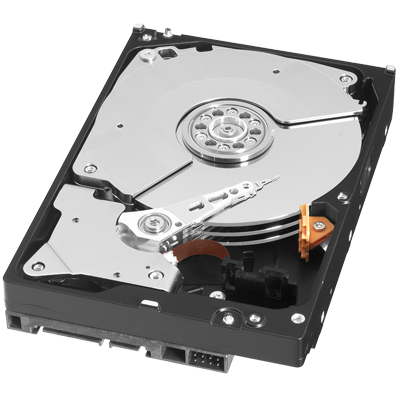 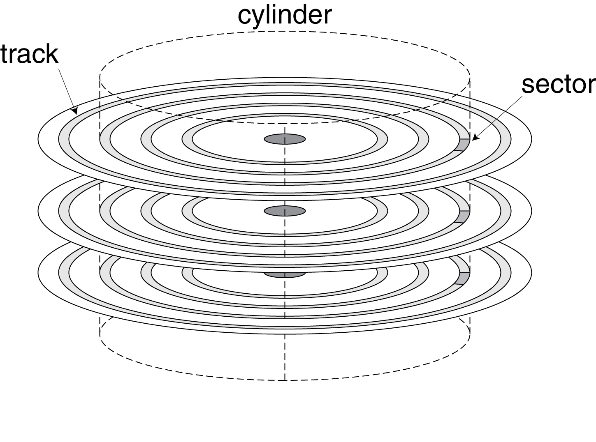 In the disk storage, a sector is a subdivision of a track on a magnetic disk. Each sector stores a fixed amount of user-accessible data, traditionally 512 bytes for hard disk drives (HDDs) and 2048 bytes for CD-ROMs and DVD-ROMs. The data area contains the sync bytes, user data and an error-correcting code (ECC) that is used to check and possibly correct errors that may have been introduced into the data.

Cache memory is located in the highest level of memory hierarchy. It is fast, and typically takes 1 clock cycle to access the data in the cache memory. Ideally it supplies most data to a processor. It usually holds most recently accessed data.

Caches first appeared in research computers in the early 1960s and in production computers later in that same decade. Every general-purpose computer built today, from servers to low-power embedded processors, includes caches.

When designing cache, the following questions are considered:

Although we focus on data cache loads, the same principles apply for fetches from an instruction cache.

Before diving into the detail description, let’s look at the cache terminology.

The cache is organized into S sets. Each memory address maps to exactly one set. The caches are categorized by # of blocks in a set:

We exemplified the cache parameters as follows:

It is ridiculously small, but will illustrate organizations with these simple parameters in the next subsection.

In the direct mapped cache, the cache memory assigns the location of the cache for each work based on the address of the word (block) in the main memory. Since there is only one choice to put the data of memory into the blocks of the cache memory, it is called as ‘Directed mapped’, and the block number is calculated with the following modulo operation:

The cache has eight sets, each of which contains a one-word block. The two rightmost bits of the address are always 00, because they are word aligned. The next three rightmost bits ( 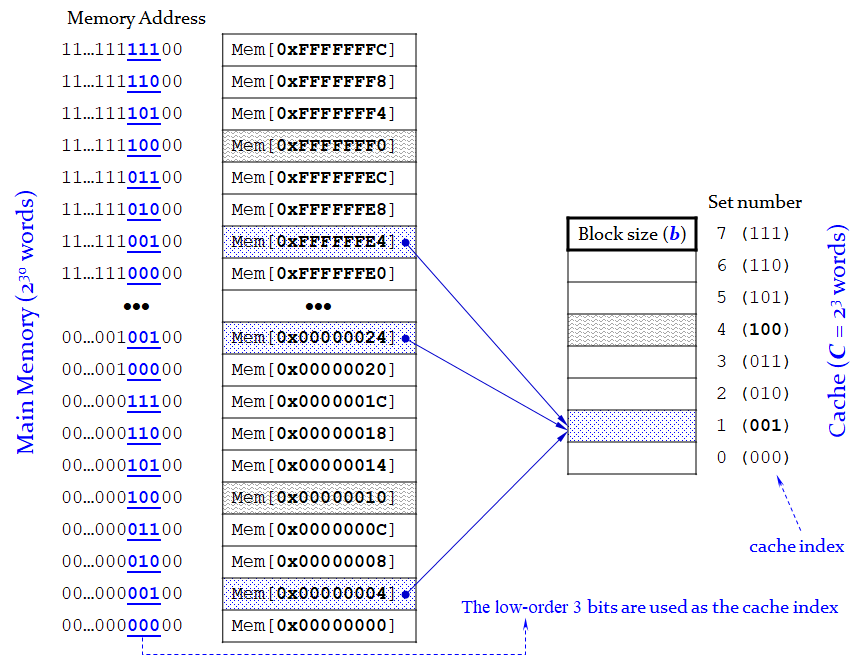 Fig. ‑. Mapping of Main Memory to a Direct Mapped Cache

The following figure shows the direct mapped cache hardware. The cache is constructed with an eight-entry SRAM. Each entry, or set, contains one line consisting of 1 valid bit, 27 bits of tag, and 32 bits of data, as shown in the right side of Fig. 12-7. The cache is accessible using the 32-bit (memory) address that consists of the tag field (27 bits), the set bits (3 bits) and the byte offset (2 bits), as indicated in the top left of Fig. 12-7. 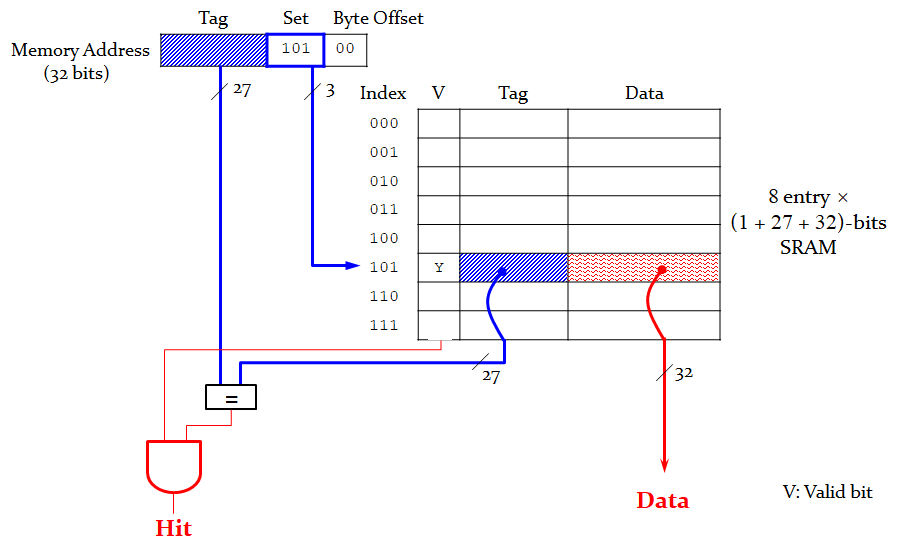 The system knows whether a requested block is in the cache or not through tag values. The tags contain the address information required to identify whether a block (a word) in the cache corresponds to the requested block (word). The tag needs only to contain the upper portion of the address. Then what if there is no data in a location? The system indicates whether an entry contains a valid address through a valid bit. If the valid bit is one, there exists a valid address; otherwise there is no valid address in that entry. It is initially set to 0.

Let’s look at how the cache memory is utilized when executing the following MIPS assembly codes:

The program contains a loop that repeats for five iterations. Each iteration involves three memory accesses (loads), resulting in 15 total memory accesses. We assume that the cache is initially empty. The first two instructions (addi and beq) require no memory access. Since the cache is initially empty, there is no data in the memory. The third instruction, lw $t1, 0x4($0), got missed, where the memory address consists of the tag (00…00), the set value (001) and the byte offset (00). The system makes a copy the data from memory and the entry of index number 1 is filled with the data including the valid bit (1) and the tag value (00…00), as shown below:

The fourth instruction, lw $t2, 0xc($0), got missed because there is no data in the memory. The memory address of the instruction consists of the tag (00…00), the set value (011) and the byte offset (00). The system makes a copy the data from memory in the same way. The entry of index number 3 is filled with the data including the valid bit (1) and the tag value (00…00), as shown below:

The fifth instruction, lw $t3, 0x8($0), got missed again because there is no data in the memory. The memory address of the instruction consists of the tag (00…00), the set value (010) and the byte offset (00). The system makes a copy the data from memory in the same way before. The entry of index number 2 is filled with the data including the valid bit (1) and the tag value (00…00), as shown below:

No memory access is required for the last two instructions, addi and j. The first time the loop executes, the cache is empty and the data must be fetched from main memory locations 0x4, 0xC, and 0x8 into cache sets 1, 3, and 2, respectively. The processor jumps to the instruction line loop. However, the next four times the loop executes, the data is found in the cache. We can calculate the miss rate, 3/15 = 20%.

Now let’s assume that we have the memory addresses 0x4 and 0x24 in a loop, as shown below: 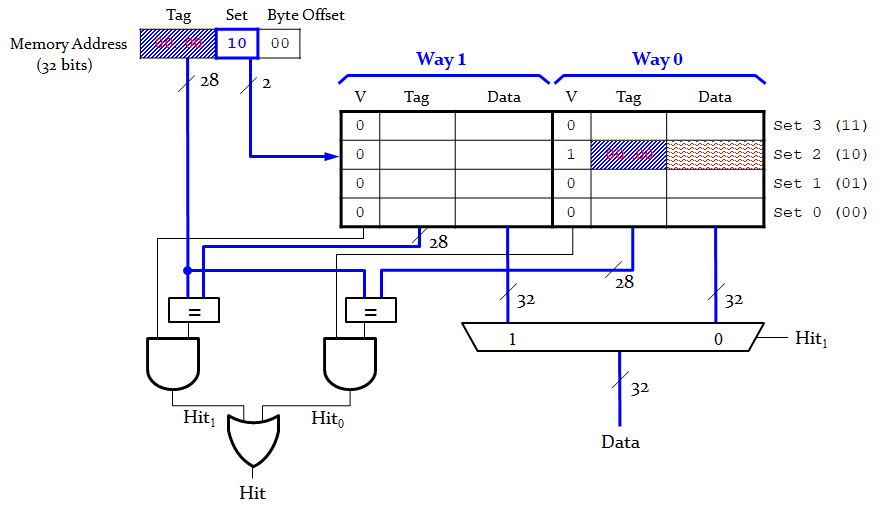 The number of tag bits increases from 27 to 28 bits. 2-way set associative cache has two options to store the tag value and the data. Each way consists of a data block and the valid and tag bits. When the memory address is searched as noticed in the top left of the above figure, the tag value in memory address is compared with the tag value in the cache. The cache reads blocks from both ways in the selected set and checks the tags and valid bits for a hit. If a hit occurs in one of the ways, a multiplexer selects data from that way.

Let’s look at how the 2-way set associative cache is utilized when executing the following MIPS assembly codes:

The program contains a loop that repeats for five iterations. Each iteration involves two memory accesses (loads), resulting in 10 total memory accesses. We assume that the cache is initially empty.

The second load instruction, lw $t2, 0x24($0), got missed again because there is no data in the memory. The memory address of the instruction consists of the tag (00…10), the set value (01) and the byte offset (00). The system makes a copy the data from memory to cache in the same way. In this time, the way 1 entry of the set number 1 is filled with the data including the valid bit (1) and the tag value (00…10), as shown below:

A fully associative cache allows a given block to go in any cache entry. The cache is expensive to build because it requires all entries to be searched at once. But it can reduce conflict misses.