Chapter 4: Constructions of Race in Britain

“Black” in America usually refers to a person who appears to have African ancestry. In British contexts the label, historically, has been used more broadly. The Cambridge Dictionary qualifies its definition (“relating or belonging to people with black or dark brown skin”) as signifying “especially people who live in Africa or whose family originally came from Africa” (“Black”). That is, “Black” does not only mean people of African ancestry. In fact, the label has been applied to Irish, Italian, and Asian peoples.

It is important to bear in mind that nearly any time a region sees a recognizable immigration from a particular area, those immigrants are likely to be stereotyped and treated as a group—all those ____ from ____. Celts, Romans, Angles, Saxons, and Normans have all immigrated, often as invading and conquering forces (e.g., the Norman Conquest of 1066, to which the present monarchy traces itself). Afro-Diasporic peoples have been in Britain since at least the Roman occupation (43-410 AD), serving as part of the Roman military.

Historic records of Afro-Diasporic peoples in Britain become more substantial and available within the last five centuries. These show a general tendency to disparage or fear immigrants who were poor or working class but welcome and include immigrants who were wealthy. It is in the late-1700s that documentation of the writings of Black Britons begins to be readily found, whether in the form of personal writings such as letters or political publications (Nasta and Stein, Introduction 5). 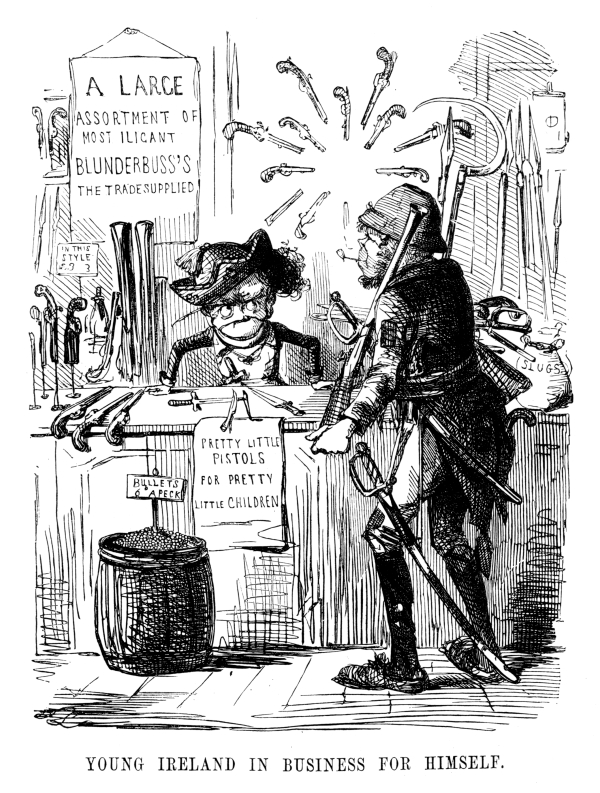 Figure 1: Two Irishmen in a shop, both identified with violence through the prevalence of weapons, and both drawn with facial features similar to those with which Africans and Afro-Diasporic peoples have been caricatured.

Despite pale skin color, Irish and Polish people, as well as Traveller communities, “are sometimes approached by the majority as though [their identities] are innate and unchangeable, and at other times as though [their identities] are simply a choice that people ought to be able to opt into or out of” (Samanani 8).[1] Disempowered groups are both maligned as inherently inferior and condemned for failing to leave their racial, ethnic, or cultural distinctiveness, as a means of maintaining the power differential.

The realities of multiple, similar discriminations against different minority communities in Britain produced a collectivist idea of “political blackness,” a concept highlighting the commonalities shared among different non-white experiences of life in Britain. Inasmuch as there was a tendency to offer racist denigration of many different peoples under the label “Black,” the people subjected to it recognized the potential in working together, sort of an “as far as the racists are against us all, we are all kind of Black” attitude, producing a coalition working against a range of racial and ethnic discriminations. Obviously, “political blackness” is also a problematic identity marker, as it “was defined largely in terms of exclusion or oppression” (Samanani 7).

One manifestation of the tendency to group together all disparaged migrants is in political cartooning. “Young Ireland in Business for Himself,” a 1846 cartoon by John Leech shown above, portrays William Smith O’Brien, one of the leaders of the “Young Ireland” movement (and at the time a member of the House of Commons), sitting behind the counter of his shop with an “ASSORTMENT OF MOST ILICANT” weapons. From mocking the Irish accent by the misspelling of “illicit” to identifying the Irish with violence through the prevalence of weaponry in the shop, the cartoon extensively denigrates the Irish. Because the “Young Ireland” movement was distinguished from the larger Irish self-government movement specifically over the larger movement’s repudiation of the use of force, the emphasis on “Young Ireland’s” violence is perhaps fair of the cartoonist.

“Young Ireland’s” cap is of the style called a “Repeal” cap, referring to the movement to repeal the unification of the Irish and British parliaments; the 1801 Act which brought them together in effect afforded the Irish a few seats in a parliament that met in London and was seen by the Irish emancipationists as working against self-government.

His customer is already heavily armed, though one of his “weapons” is a long-handled sickle—a grass-cutting farmer’s tool. The weapons display is cluttered, and the bullets are being sold by the peck (a volume close to two gallons).

Notice both Irishmen are caricatured to resemble apes, a common tactic of editorial cartoonists at the time, in both the US and the UK, suggesting that these men were somehow less than human.

In Britain today, “Black” tends to be most focused upon two groups: people with recent African ancestry and people with recent Caribbean ancestry. Contemporary conversations about immigration tend to note the “Windrush Generation,” the people who came to Britain from the rest of the former British Empire—especially from the Caribbean—following the Second World War, when a shortage of workers led Britain to legislatively promote such migration from the former colonies.

This kind of understanding of Blackness that is clearly manifest in recent centuries and has been tied to the trade in enslaved peoples as well as ongoing discrimination is rooted in history. The various ways that “dark” and “black” became marks of inferiority and linguistic and visual cues for the discrimination against and denigration of peoples of many different geographical origins and physical complexions is complex and situated in many different historical moments and contexts. Signs and traces of characterizations of people who are less valued or less influential as ‘black’ or as related to Africa exist since before the island of Britain became home to England.

Bibliography to Constructions of Race in Britain

Suggested further reading on Constructions of Race in Britain

Baucom, Ian. Out of Place: Englishness, Empire, and the Locations of Identity. Princeton UP, 1999.

Gilroy, Paul. There Ain’t No Black in the Union Jack. Routledge, 2013.

Goldenberg, David. “Racism, Color Symbolism, and Color Prejudice.” The Origins of Racism in the West. edited by Miriam Eliav-Feldon, Benjamin Isaac, and Joseph Ziegler. Cambridge UP, 2009: 88-108.

Modood, Tariq. “The Rise and Fall of an Anti-Racism: From Political Blackness to ethnic Pluralism.” In New Left, New Right and Beyond: Taking the Sixties Seriously, edited by Geoff Andrews, Richard Cockett, Alan Hooper, and Michael Williams, 168-81. Palgrave Macmillan UK, 1999.

Chapter 5 - An Interview with Josie Gill