Globalization is not a new phenomenon and has indeed existed in some form or another for centuries, albeit often limited to only a portion of the world. However, early globalizers conquered and unified most of the world known to them at that time.  Alexander the Great conquered the territory from Macedonia to Greece, Asia Minor as well as Egypt, and then further east words as far as Afghanistan and the Indus River. Similarly, by 1258, Genghis Khan created a global empire further expanded by his successors. Under Kublai Khan, the empire expanded southwards to include all of modern-day China as well as the Korean Peninsula. The Mongol Empire operated an advanced relay mail system spanning the entire territory, tolerated religious diversity and encouraged freedom of religion, had a parliamentary style form of government, used paper currency backed by precious metals and there existed a system of financial backing of ventures similar to the modern-day corporation. The Silk Road became a massive free trade area from Europe through the middle east to Russia, China and Korea.  One could argue that these examples were not truly globalization because of their limited scope.

Most western observers look at globalization as a phenomenon that started during the Industrial Revolution. Once manufacturing machines were made of iron and steel, powered by steam, the final products needed markets and the demand for raw materials for the manufacturing processes expanded dramatically. The interventions that harnessed steam, allowed for the development of transportation technologies, rapidly and reliably moving heavy loads over long distances. Applied to terrestrial transportation in the form of railroads and on the steamship by water, nations were able to expand the reach to new markets and source raw materials.

The Economic power and prosperity generated motivated nations to expand abroad, ringing in the era of rapid colonization. The competition for resources and colonies to supply these needs led directly to World War I and more indirectly to World War II, restructuring the global world order profoundly.  This first phase of Western globalization was primarily technologically driven. In the wake of the destruction brought on by the competitive forces of technology driven globalization, world leaders determined to create multilateral institutions to mitigate the risks of a repeat of the early 20th century. In addition to introducing institutions of peace like the UN Security Council, created to reduce the risk of destructive war between nations, the Bretton Woods institutions were created to mitigate the risk embedded in financial institutions and currencies and also to spread prosperity to nations not part of the “developed” world.  Applying the work of economists such as John Adams and Ricardo, with the help of the General Agreement and Tariffs and Trade, a new era of trade developed where nations would buy and sell resources and goods freely, leading to the increased interconnectedness and interdependence of nations. The combination of technology and open and free trade rang in the third Industrial Revolution where automation, communication and digital technologies dramatically changed the world. With the arrival of the Internet the sharing of data and information expanded dramatically, leading to what is known as the fourth Industrial Revolution. 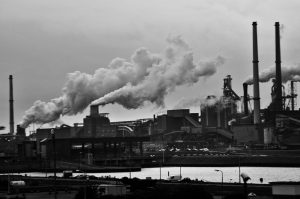