Anna Letitia Aikin Barbauld was born into a family of Presbyterian Dissenters. Her father, John Aikin, a schoolteacher and minister, took the unusual step of educating his daughter while she was still in her infancy. In addition to learning to read and write in English—not a given for women at this time—Barbauld learned French, Italian, Latin, and Greek. Joseph Priestley, poet, Dissenter theologian, and friend of the family, helped inspire Barbauld to write poetry. She privately circulated her poems. Like many women authors, she first published her poetry under the auspices of a male relative, in her case, in her brother John’s Essays on Song-Writing (1771), which included several of her poems. William Enfield, who had published comments on Joseph Priestley’s attacks on the Church of England, also included several of Barbauld’s hymns in his Hymns for Public Worship (1772). In 1773, she published Poems under her own name, a radical act at that time, and met with remarkable success. 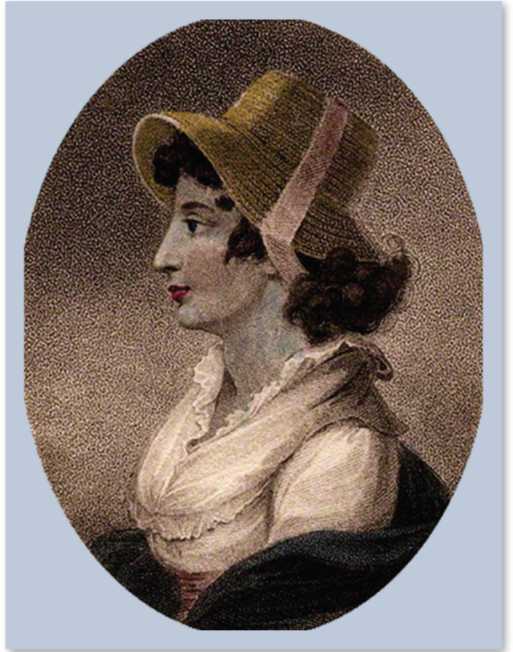 In 1774, she married Rochemont Barbauld, a Presbyterian Dissenter convert. They opened a boarding school in Suffolk and adopted children. She herself taught at Palgrave Academy in subjects that included geography and science. Her early work focused on educating children, and education remained a strong purpose throughout her writing career in both original and edited work, including Lessons for Children (1778-79) and Female Speaker (1811), an anthology of prose and poetry for young women. Her multivolume edition of The British Novelists (1810) curated the novel genre, canonizing and giving weight to the form for future generations. Its introduction evaluated constituent elements of the novel genre, particularly plot and narrative closure.

Her “evaluation” of society—particularly of its injustices; inequalities of class, race and gender; and atrocities—shaped much of her poetry and prose. In An Address to the Opposers of the Repeal of the Corporation and Test Acts (1790), she condemned religious oppression in England in an emotionally-charged and cogent argument. She prophesied the corruption and decline of a nation that failed to abolish the abhorrent slave trade in her Epistle to William Wilberforce Esq. On the Rejection of the Bill for Abolishing the Slave Trade (1791). And she vilified the English war against the French in Sins of Government, Sins of the Nation (1793).

1.4.1 “Epistle to William Wilberforce Esq. On the Rejection of the Bill for Abolishing the Slave Trade”

Thy Country knows the sin, and stands the shame!

The Preacher, Poet, Senator in vain

Has rattled in her sight the Negro’s chain;

With his deep groans assailed her startled ear,

And rent the veil that hid his constant tear;

Forced her averted eyes his stripes to scan,

Beneath the bloody scourge laid bare the man,

And flashed conviction on her shrinking soul.

The Muse too, soon awaked, with ready tongue

A new Astrean reign, an age of gold:

She knows and she persists—Still Afric bleeds,

She stamps her infamy to future time,

And on her hardened forehead seals the crime.

In vain, to thy white standard gathering round,

Wit, Worth, and Parts and Eloquence are found:

In vain, to push to birth thy great design,

All, from conflicting ranks, of power possesst

To rouse, to melt, or to inform the breast.

Where seasoned tools of Avarice prevail,

A Nation’s eloquence, combined, must fail:

Each flimsy sophistry by turns they try;

The plausive argument, the daring lie,

The’ acknowledged thirst of gain that honour wounds:

Which sudden turns to stone the falling tear:

They search assiduous, with inverted skill,

For forms of wrong, and precedents of ill;

And glean up crimes from each remoter age:

From scoffing fiends bursts forth the laugh of hell;

To jests unseemly, and to horrid mirth—

Forbear!—thy virtues but provoke our doom,

And swell the’ account of vengeance yet to come;

For, not unmarked in Heaven’s impartial plan,

And injured Afric, by herself redresst,

Darts her own serpents at her tyrant’s breast.

Each vice, to minds depraved by bondage known,

With sure contagion fastens on his own;

The milky innocence of infant veins;

There swells the stubborn will, damps learning’s fire,

The whirlwind wakes of uncontrouled desire,

Sears the young heart to images of woe,

And blasts the buds of Virtue as they blow.

Diffused on sofas of voluptuous ease;

With anxious awe her menial train around

See her, in monstrous fellowship, unite

At once the Scythian and the Sybarite!

Which frugal nature purposed to divide;

See her, with indolence to fierceness joined,

Of body delicate, infirm of mind,

And with unruffled mien, and placid sounds,

Nor, in their palmy walks and spicy groves,

No milk-maid’s song, or hum of village talk,

Soothes the lone poet in his evening walk:

Where the mixed sounds of cheerful labour rise;

No blooming maids and frolic swains are seen

To pay gay homage to their harvest queen:

No heart-expanding scenes their eyes must prove

Of thriving industry and faithful love:

But shrieks and yells disturb the balmy air,

Far from the sounding lash the Muses fly,

Nor less from the gay East, on essenced wings,

The marble palaces and rural shades;

And decks in summer wreaths her smoky towers;

And scarce vouchsafes his shameless front to hide:

The spreading leprosy taints every part,

Infects each limb, and sickens at the heart.

Simplicity, most dear of rural maids,

Stern Independence from his glebe retires,

For you, whose tempered ardour long has borne

Untired the labour, and unmoved the scorn;

In Virtue’s fasti be inscribed your fame,

And uttered yours with Howard’s honoured name;

Around whose steady brows, in union bright,

Your merit stands, no greater and no less,

Without, or with the varnish of success:

But seek no more to break a nation’s fall,

For ye have saved yourselves—and that is all.

Succeeding times your struggles, and their fate,

With mingled shame and triumph shall relate;

While faithful History, in her various page,

Marking the features of this motley age,

To shed a glory, and to fix a stain,

Tells how you strove, and that you strove in vain.

‘TIS past! The sultry tyrant of the south

Move silent on; the skies no more repel

The dazzled sight, but with mild maiden beams

To wander o’er their sphere; where hung aloft

Impatient for the night, and seems to push

Her brother down the sky. Fair VENUS shines

Even in the eye of day; with sweetest beam

Of soften’d radiance from her dewy locks.

Her cheek yet warm with blushes, slow retires

Thro’ the Hesperian gardens of the west,

And shuts the gates of day. ‘Tis now the hour

When Contemplation, from her sunless haunts,

The cool damp grotto, or the lonely depth

Of unpierc’d woods, where wrapt in solid shade

She mused away the gaudy hours of noon,

And fed on thoughts unripen’d by the sun,

Where, one by one, the living eyes of heaven

O’er all this field of glories: spacious field!

And worthy of the master: he, whose hand

With hieroglyphics older than the Nile,

The finger of thy GOD. From what pure wells

Are all these lamps so fill’d? these friendly lamps,

For ever streaming o’er the azure deep

To point our path, and light us to our home.

How soft they slide along their lucid spheres!

And silent as the foot of time, fulfil

Their destin’d courses: Nature’s self is hush’d,

And, but a scatter’d leaf, which rustles thro’

The thick-wove foliage, not a sound is heard

To break the midnight air; tho’ the rais’d ear,

Intensely listening, drinks in every breath.

How deep the silence, yet how loud the praise!

But are they silent all? or is there not

A tongue in every star that talks with man,

And wooes him to be wise; nor wooes in vain:

This dead of midnight is the noon of thought,

And wisdom mounts her zenith with the stars.

At this still hour the self-collected soul

Turns inward, and beholds a stranger there

Of high descent, and more than mortal rank;

An embryo GOD; a spark of fire divine,

Which must burn on for ages, when the sun,

(Fair transitory creature of a day!)

Has clos’d his golden eye, and wrapt in shades

Ye citadels of light, and seats of GODS!

Perhaps my future home, from whence the soul

Revolving periods past, may oft look back

With recollected tenderness, on all

The various busy scenes she left below,

Its deep laid projects and its strange events,

As on some fond and doating tale that sooth’d

Her infant hours; O be it lawful now

To tread the hallow’d circles of your courts,

And with mute wonder and delighted awe

On fancy’s wild and roving wing I sail,

From the green borders of the peopled earth,

And the pale moon, her duteous fair attendant;

From solitary Mars; from the vast orb

Of Jupiter, whose huge gigantic bulk

To the dim verge, the suburbs of the system,

Amongst her weeping handmaids: fearless thence

I launch into the trackless deeps of space,

Of elder beam; which ask no leave to shine

Of our terrestrial star, nor borrow light

From the proud regent of our scanty day;

Sons of the morning, first born of creation,

And only less than him who marks their track,

And guides their fiery wheels. Here must I stop,

Or is there aught beyond? What hand unseen

To the dread confines of eternal night,

To solitudes of vast unpeopled space,

The desarts of creation, wide and wild;

Where embryo systems and unkindled suns

Sleep in the womb of chaos; fancy droops,

But oh thou mighty mind! whose powerful word

Said, thus let all things be, and thus they were,

Where shall I seek thy presence? how unblam’d

Have the broad eye-lids of the morn beheld thee?

Or does the beamy shoulder of Orion

Support thy throne? O look with pity down

On erring guilty man; not in thy names

Of terrour clad; not with those thunders arm’d

The scatter’d tribes; thou hast a gentler voice,

That whispers comfort to the swelling heart,

Abash’d, yet longing to behold her Maker.

But now my soul unus’d to stretch her powers

In flight so daring, drops her weary wing,

Drest up with sun, and shade, and lawns, and streams,

A mansion fair and spacious for its guest,

And full replete with wonders. Let me here

And ripen for the skies: the hour will come

When all these splendours bursting on my sight

Shall stand unveil’d, and to my ravished sense

Unlock the glories of the world unknown.

O born to rule in partial Law’s despite,

Go forth arrayed in panoply divine;

That angel pureness which admits no stain;

And kiss the golden sceptre of thy reign.

Of bright artillery glancing from afar;

Blushes and fears thy magazine of war.

Thy rights are empire: urge no meaner claim,-

Felt, not defined, and if debated, lost;

Shunning discussion, are revered the most.

Try all that wit and art suggest to bend

Of thy imperial foe the stubborn knee;

Make treacherous Man thy subject, not thy friend;

Thou mayst command, but never canst be free.

Awe the licentious, and restrain the rude;

Be, more than princes’ gifts, thy favours sued;-

She hazards all, who will the least allow.

But hope not, courted idol of mankind,

On this proud eminence secure to stay;

Thy coldness soften, and thy pride give way.

Then, then, abandon each ambitious thought,

Conquest or rule thy heart shall feebly move,

In Nature’s school, by her soft maxims taught,

That separate rights are lost in mutual love.