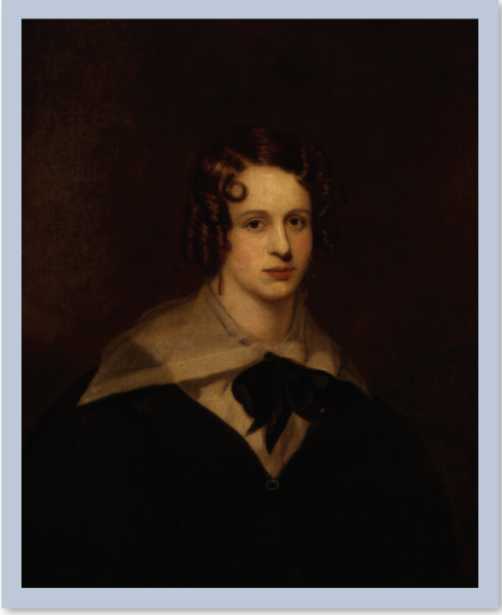 Like most women of her era, Felicia Dorothea Hemans was educated at home—first in England, then in Wales—in the expected subjects of art, music, literature, and modern languages. She added to the more commonly-taught French and Italian, Welsh, Spanish, Portuguese, German, and Latin. Unlike most women, she published a collection of Poems (1808) when she was fourteen. It heralded a remarkable, and remarkably successful, literary career. She published numerous collections of poetry, including The Domestic Affections (1812), The Restoration of Works of Art to Italy (1816), Tales and Heroic Scenes (1819), and Songs of the Affections (1830). She also wrote translations of Continental poems, critical reviews, plays, and songs.

Married in 1812 and separated from Captain Alfred Hemans when he left for Rome, Hemans became, essentially, single mother to their five children. Her work often addressed the difficulty for a woman to write and fulfill her domestic responsibilities--and fulfill them she must, in service to the “natural” superiority of her husband, and, indeed, her nation. The home women sustained served to ground the patriotic ideals of the soldier-son who died in battle—as so many men did during Hemans’ lifetime. Hemans’ personal difficulties were increased by a mysterious, chronic ailment that caused painful palpitations and general inflammation for most of her life. She continued to write through her pain until, nearly incapacitated, she died in 1835.

Her poetic themes of chivalry, history, the military, and domestic affections ranged among Romantic interests, winning her the praise and admiration of Wordsworth, Scott, Byron, P. B. Shelley, and the Scottish poet and playwright Joanna Baillie (1762-1851). Hemans uniquely presented female heroes defending human rights, in such figures as “The Wife of Asdrubal” (1819), who stands atop a temple while Carthage burns and denounces the cowardice of her husband, the governor of Carthage. Rather than have them be victims to their father’s treachery, she stabs her children and then immolates herself. Similarly, “The Bride of the Greek Isle” (1828) after being kidnapped by pirates sets their ship on fire to avoid slavery and secure her own freedom in death. That these women pay such terrible prices to the nation and for their freedom suggests Hemans’ deeper critique of a society and culture that places women in subject positions their entire lives. Her work remained popular in England and America well into the Victorian era, and she earned praise from such important Victorian women writers as Elizabeth Barrett Browning (1806-1861) and George Eliot (1819-1880).

The boy stood on the burning deck,

﻿Whence all but him had fled;

The flame that lit the battle’s wreck

﻿Shone round him o’er the dead.

Yet beautiful and bright he stood,

﻿As born to rule the storm;

A creature of heroic blood,

﻿A proud though childlike form.

The flames rolled on—he would not go

﻿Without his father’s word;

That father, faint in death below,

﻿His voice no longer heard.

He knew not that the chieftain lay

﻿Unconscious of his son.

“Speak, father!” once again he cried,

And but the booming shots replied,

﻿And fast the flames rolled on.

Upon his brow he felt their breath,

﻿And in his waving hair;

﻿In still, yet brave despair.

And shouted but once more aloud

While o’er him fast, through sail and shroud,

﻿The wreathing fires made way.

They wrapt the ship in splendour wild,

﻿They caught the flag on high,

And streamed above the gallant child

Then came a burst of thunder sound—

—Ask of the winds that far around

﻿With fragments strew the sea;

With mast, and helm, and pennon fair,

﻿That well had borne their part—

But the noblest thing that perished there

﻿Was that young, faithful heart.

The stately homes of England!

How beautiful they stand,

Amidst their tall ancestral trees,

O’er all the pleasant land!

The deer across their greensward bound

Through shade and sunny gleam,

And the swan glides past them with the sound

Of some rejoicing stream.

The merry homes of England!

Around their hearths by night

What gladsome looks of household love

Meet in the ruddy light!

There woman’s voice flows forth in song,

Or childish tale is told,

Or lips move tunefully along

Some glorious page of old.

The blessèd homes of England!

How softly on their bowers

Is laid the holy quietness

That breathes from Sabbath hours!

Solemn, yet sweet, the church-bell’s chime

Floats through their woods at morn;

All other sounds, in that still time,

Of breeze and leaf are born.

The cottage homes of England!

By thousands on her plains,

They are smiling o’er the silvery brooks,

And round the hamlets’ fanes.

Through glowing orchards forth they peep,

Each from its nook of leaves;

And fearless there the lowly sleep,

As the bird beneath their eaves.

The free, fair homes of England!

Long, long, in hut and hall

May hearts of native proof be reared

To guard each hallowed wall!

And green forever be the groves,

And bright the flowery sod,

Its country and its God!

Thou, to whom its fires are given,

Where the conqueror’s pass’d of old;

And the festal sun that shone,

Makes thy day of glory bright,

With a shower of golden light.

While, from tombs of heroes borne,

From the dust of empire shorn,

Flowers upon thy graceful head,

Chaplets of all hues, are shed,

In a soft and rosy rain,

Touch’d with many a gem-like stain.

Thou hast gain’d the summit now!

Music hails thee from below;

Ashes of the sepulchre;

All the bright air as it floats.

Unto that proud harmony!

And thy voice is heard to rise

With a low and lovely tone

In its thrilling power alone;

And thy lyre’s deep silvery string,

Touched as by a breeze’s wing,

Ere the tide of rapture burst.

All the spirit of thy sky

And thy cheek a flush hath caught

From the joy of kindled thought;

And the burning words of song

From thy lip flow fast and strong,

With a rushing stream’s delight

Radiant daughter of the sun!

Now thy living wreath is won.

Crown’d of Rome!–Oh! art thou not

Happy in that glorious lot?–

Happier, happier far than thou,

With the laurel on thy brow,

She that makes the humblest hearth

Lovely but to one on earth!