Robert Herrick’s father, Nicholas Herrick, was a wealthy goldsmith who apparently committed suicide before Robert Herrick reached the age of two. In 1607, Herrick served as apprentice to his uncle, Sir William Herrick, who was jeweler to the king, but did not aspire to follow in his uncle’s footsteps. Instead, Herrick studied at St. John’s College, Cambridge and at Trinity Hall, Cambridge, both noted for their religious atmosphere. And by 1627, he took religious orders and served as chaplain to George Villiers, 1st Duke of Buckingham (1592-1628) during his ill-fated expedition to La Rochelle in aid of the Huguenots.

In 1630, Herrick was made a vicar of Dean Prior, an Anglican country parsonage in Devonshire. Due to his Royalist sympathies, Herrick lost that position in 1647 during the Civil War. Until the Restoration of Charles II, Herrick lived in Westminster, completing his collected poems, Hesperides; or the Works Both Human and Divine of Robert Herrick, Esq. (1648). After the Restoration, he regained his position as vicar, holding it until his death. 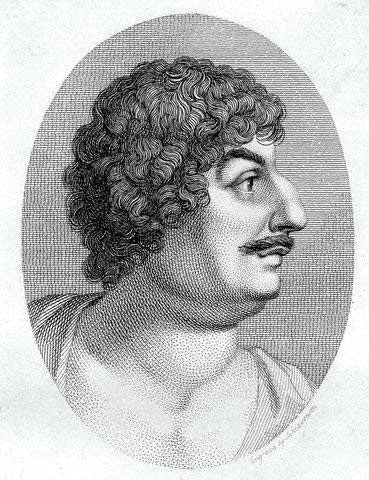 Considered one of the Cavalier Poets—who opposed the uniqueness, nonconformity, and scientific bent of the metaphysical poets—Herrick was a self-professed son of Ben (Jonson). As such, he was learned in the classics, particularly classic Roman poetry by Horace (65 – 8 BCE), Martial (c. 38 – c. 102 CE), and Ovid (43 BC – c. 17 CE), among others. Alongside his Christian orthodoxy stood Herrick’s love of mythology and pagan rituals. His poetry is notable for its variety in form and style, for its interest in innovation and experimentation, and for the exceptional musicality of his lyrics. Even as his “To the Virgins, to Make Much of Time” insists on death’s ending all our tomorrows, its rhythm and beauty make the flower that keeps us smiling.

I sing of brooks, of blossoms, birds, and bowers,

Of April, May, of June, and July flowers.

Of bridegrooms, brides, and of their bridal-cakes.

I write of youth, of love, and have access

By these to sing of cleanly wantonness.

I sing of dews, of rains, and piece by piece

Of balm, of oil, of spice, and ambergris.

I sing of Time’s trans-shifting; and I write

I write of groves, of twilights, and I sing

The court of Mab, and of the fairy king.

I write of Hell; I sing (and ever shall)

Of Heaven, and hope to have it after all.

For those my unbaptized rhymes,

Writ in my wild unhallowed times,

For every sentence, clause, and word,

That’s not inlaid with Thee, my Lord,

Forgive me, God, and blot each line

Out of my book, that is not Thine.

But if, ’mongst all, Thou find’st here one

That one of all the rest shall be

The glory of my work, and me.

Dull to myself, and almost dead to these

My many fresh and fragrant mistresses;

Lost to all music now, since everything

Puts on the semblance here of sorrowing.

Sick is the land to th’ heart, and doth endure

But if that golden age would come again

And Charles here rule, as he before did reign;

If smooth and unperplex’d the seasons were

As when the sweet Maria lived here;

I should delight to have my curls half drown’d

In Tyrian dews, and head with roses crown’d.

And once more yet (ere I am laid out dead)

Knock at a star with my exalted head.

Get up, get up for shame, the Blooming Morne

Upon her wings presents the god unshorne.

See how Aurora throwes her faire

Fresh-quilted colours through the aire:

Get up, sweet-Slug-a-bed, and see

The Dew-bespangling Herbe and Tree.

Each Flower has wept, and bow’d toward the East,

Above an houre since; yet you not drest,

Nay! not so much as out of bed?

Nay, profanation to keep in,

When as a thousand Virgins on this day,

Spring, sooner than the Lark, to fetch in May.

Rise; and put on your Foliage, and be seene

To come forth, like the Spring-time, fresh and greene;

And sweet as Flora. Take no care

For Jewels for your Gowne, or Haire:

Feare not; the leaves will strew

Gemms in abundance upon you:

Besides, the childhood of the Day has kept,

Against you come, some Orient Pearls unwept:

Come, and receive them while the light

Hangs on the Dew-locks of the night:

And Titan on the Eastern hill

Retires himselfe, or else stands still

Till you come forth. Wash, dresse, be briefe in praying:

Few Beads are best, when once we goe a Maying.

How each field turns a street; each street a Parke

Made green, and trimm’d with trees: see how

Devotion gives each House a Bough,

Or Branch: Each Porch, each doore, ere this,

An Arke a Tabernacle is

As if here were those cooler shades of love.

Can such delights be in the street,

And open fields, and we not see’t?

The Proclamation made for May:

And sin no more, as we have done, by staying;

But my Corinna, come, let’s goe a Maying.

There’s not a budding Boy, or Girle, this day,

But is got up, and gone to bring in May.

A deale of Youth, ere this, is come

Back, and with White-thorn laden home.

Some have dispatcht their Cakes and Creame,

Before that we have left to dreame:

And some have wept, and woo’d, and plighted Troth,

And chose their Priest, ere we can cast off sloth:

Many a green-gown has been given;

Many a kisse, both odde and even:

Many a glance too has been sent

From out the eye, Loves Firmament:

Many a jest told of the Keyes betraying

This night, and Locks pickt, yet w’are not a Maying.

Come, let us goe, while we are in our prime;

And take the harmlesse follie of the time.

We shall grow old apace, and die

Before we know our liberty.

Our life is short; and our dayes run

As fast away as do’s the Sunne:

And as a vapour, or a drop of raine

Once lost, can ne’r be found againe:

So when or you or I are made

A fable, song, or fleeting shade;

All love, all liking, all delight

Then while time serves, and we are but decaying;

Her eyes the glow-worm lend thee,

And the elves also,

Nor snake or slow-worm bite thee;

Not making a stay,

Since ghost there’s none to affright thee.

Let not the dark thee cumber;

What though the moon does slumber?

The stars of the night

Will lend thee their light,

Then Julia let me woo thee,

Thus, thus to come unto me;

And when I shall meet

My soul I’ll pour into thee.

Display thy breasts, my Julia, there let me

Between whose glories, there my lips I’ll lay,

Ravished in that fair Via Lactea.

Whenas in silks my Julia goes,

Then, then (methinks) how sweetly flows

That liquefaction of her clothes.

Next, when I cast mine eyes, and see

That brave vibration each way free,

O how that glittering taketh me!

A sweet disorder in the dress

Kindles in clothes a wantonness;

A lawn about the shoulders thrown

Into a fine distraction;

An erring lace, which here and there

A cuff neglectful, and thereby

In the tempestuous petticoat;

A careless shoe-string, in whose tie

I see a wild civility:

Do more bewitch me, than when art

Is too precise in every part.

Gather ye rose-buds while ye may,

And this same flower that smiles today

Tomorrow will be dying.

The glorious lamp of heaven, the sun,

The sooner will his race be run,

And nearer he’s to setting.

That age is best which is the first,

When youth and blood are warmer;

But being spent, the worse, and worst

Then be not coy, but use your time,

And while ye may, go marry;

For having lost but once your prime,

You may forever tarry.

More discontents I never had

Since I was born, than here;

Where I have been, and still am, sad,

In this dull Devonshire.

Yet justly too I must confess,

I ne’er invented such

Ennobled numbers for the press,

Than where I loath’d so much.

From the dull confines of the drooping west

To see the day spring from the pregnant east,

Ravish’d in spirit, I come, nay more, I fly

To thee, blest place of my nativity!

Thus, thus with hallow’d foot I touch the ground,

With thousand blessings by thy fortune crown’d.

An everlasting plenty, year by year.

I am a free-born Roman; suffer then

That I amongst you live a citizen.

London my home is, though by hard fate sent

Into a long and irksome banishment;

Yet since call’d back, henceforward let me be,

For, rather than I’ll to the west return,

I’ll beg of thee first here to have mine urn.

Weak I am grown, and must in short time fall;

Give thou my sacred relics burial.

When I a verse shall make,

Know I have pray’d thee,

Saint Ben to aid me.

Make the way smooth for me,

When I, thy Herrick,

Honouring thee, on my knee

Candles I’ll give to thee,

And a new altar,

And thou, Saint Ben, shalt be

Writ in my psalter.

Say how, or when

Shall we thy guests

Meet at those lyric feasts

Made at the Sun,

The Dog, the Triple Tun?

Where we such clusters had

As made us nobly wild, not mad;

And yet each verse of thine

Or send to us

But teach us yet

Wisely to husband it;

Lest we that talent spend,

And having once brought to an end

That precious stock, the store

Of such a wit the world should have no more.

Here lies Jonson with the rest

Of the poets; but the best.

Reader, would’st thou more have known?

Ask his story, not this stone.

That will speak what this can’t tell

Of his glory. So farewell.