Henry Howard had a somewhat ostentatious childhood, as his friends and blood relations tied him to Henry VIII. He was first cousin to both Queens Anne Boleyn and Catherine Howard (1523-1542), respectively the second and fifth wives of Henry VIII, both of whom he had beheaded. He was also childhood comrade and close friend to Henry FitzRoy, 1st Duke of Richmond and Somerset (1519-1536), Henry VIII’s illegitimate son. 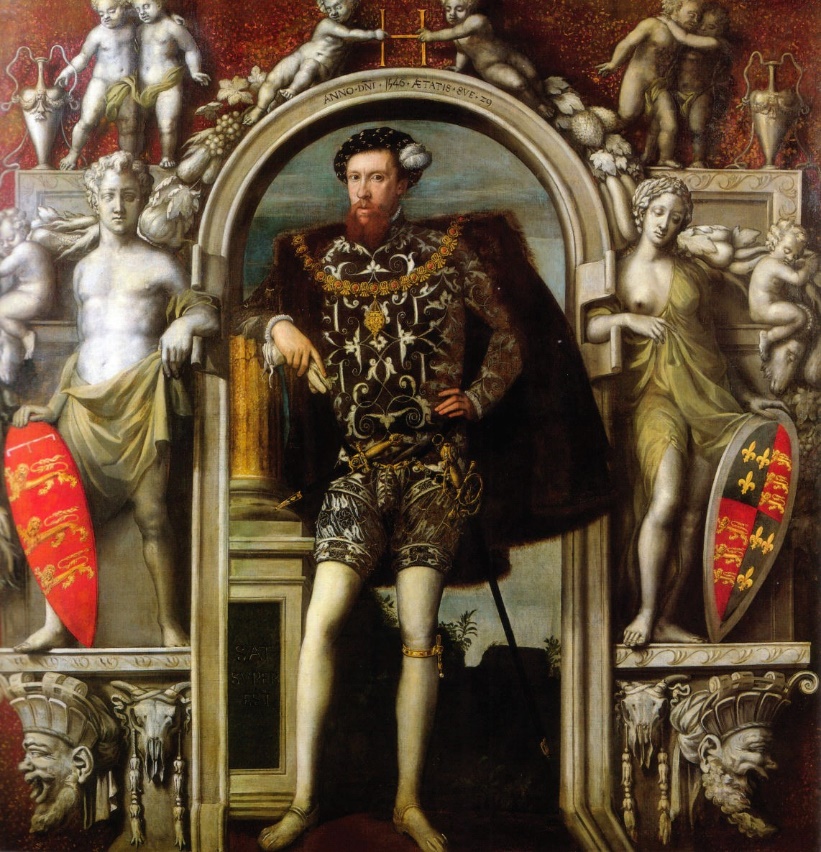 He served as Lieutenant General of the King on Sea and Land, fighting in the wars against France. He also participated in the suppression of the Pilgrimage of Grace, the Yorkshire uprising against the dissolution of the monasteries. These official activities were offset by more unruly and imperious behavior, including striking a courtier and destroying property by rapping with pebbles on the windows of houses in London, for both of which actions he was imprisoned. He was beheaded for the prideful and treasonable act of quartering the arms of Edward the Confessor (1003-1066). Though he was entitled to bear Edward the Confessor’s arms, Surrey’s doing so posed a threat to Henry VIII who had him tried for desiring to usurp the crown from Henry’s only male heir, the future Edward VI. Surrey was condemned and executed on Tower Hill on January 19, 1547.

He was survived by five children by his wife Frances de Vere, daughter of John de Vere, 15th Earl of Oxford; memorialized by an opulent painted alabaster tomb in St. Michael’s at Framlingham; and immortalized in literature by joining Wyatt as one of the first poets to write sonnets in English. He most commonly used Wyatt’s English or Shakespearean sonnet form. These formal restraints release an intimate, emotional expression and responsiveness. In his translations of Virgil’s Aeneid Books 2 and 4, Surrey was the first to use blank verse, or lines of iambic pentameter, that has been deemed uniquely appropriate to the English language. His literary output included love poems, elegies, and translations of Psalms and Ecclesiastes from the Bible. 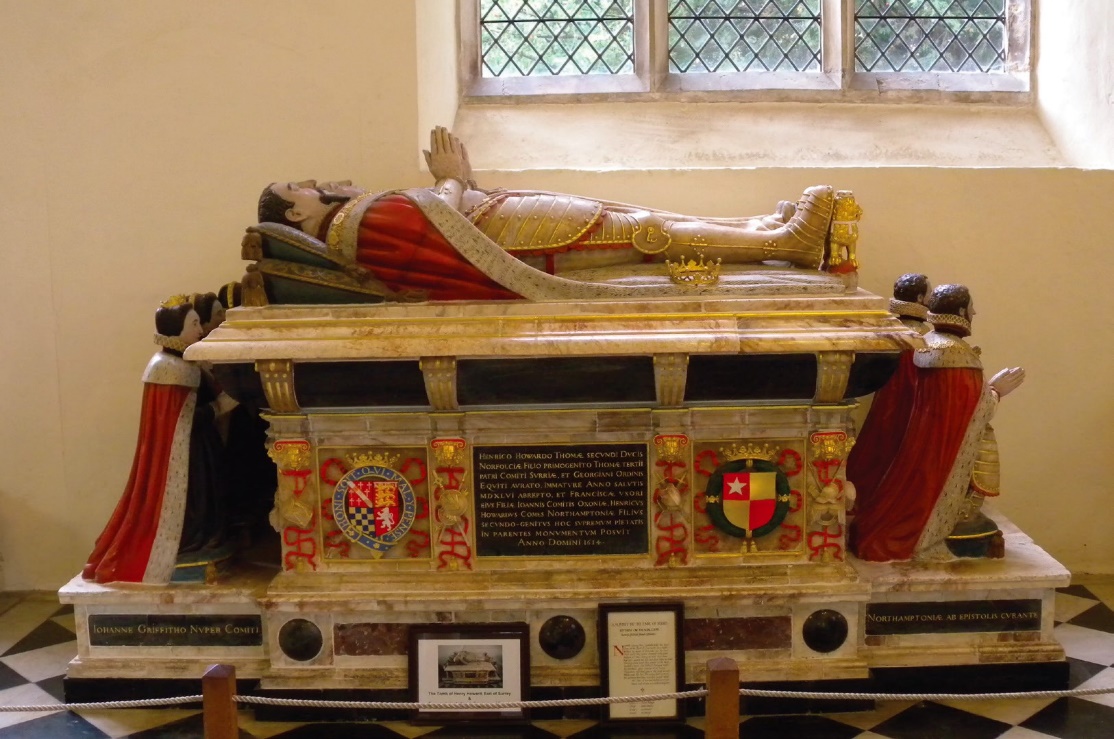 The soote season, that bud and bloom forth brings,

With green hath clad the hill and eke the vale.

The nightingale with feathers new she sings;

The turtle to her make hath told her tale.

Summer is come, for every spray now springs.

The hart hath hung his old head on the pale;

The buck in brake his winter coat he flings;

The adder all her slough away she slings;

The busy bee her honey now she mings.

Winter is worn, that was the flowers’ bale.

And thus I see among these pleasant things,

Each care decays, and yet my sorrow springs.

Love, that doth reign and live within my thought,

And built his seat within my captive breast,

Clad in the arms wherein with me he fought,

Oft in my face he doth his banner rest.

But she that taught me love and suffer pain,

My doubtful hope and eke my hot desir

With shamefast look to shadow and refrain,

And coward Love then to the heart apace

Taketh his flight, where he doth lurk and plain,

His purpose lost, and dare not show his face.

For my lord’s guilt thus faultless bide I pain,

Yet from my lord shall not my foot remove:

Sweet is the death that taketh end by love.

Alas! so all things now do hold their peace,

Heaven and earth disturbèd in no thing.

The beast, the air, the birds their song do cease;

The nightès chare the stars about doth bring;

Calm is the sea, the waves work less and less.

So am not I, whom love, alas, doth wring,

Bringing before my face the great increase

Of my desires, whereat I weep and sing,

In joy and woe, as in a doubtful ease:

For my sweet thoughts sometime do pleasure bring,

But by and by the cause of my disease

Gives me a pang that inwardly doth sting,

When that I think what grief it is, again,

To live, and lack the thing should rid my pain.

So cruel prison how could betide, alas,

As proud Windsor, where I in lust and joy

With a king’s son my childish years did pass

In greater feast than Priam’s sons of Troy?

Where each sweet place returns a taste full sour:

The large green courts, where we were wont to hove,

With eyes cast up unto the Maidens’ Tower,

And easy sighs, such as folk draw in love.

The stately sales, the ladies bright of hue,

With words and looks that tigers could but rue,

Where each of us did plead the other’s right.

The palm play where, dispoilèd for the game,

With dazed eyes oft we by gleams of love

Have missed the ball and got sight of our dame,

To bait her eyes, which kept the leads above.

The graveled ground, with sleeves tied on the helm,

On foaming horse, with swords and friendly hearts,

With cheer as though the one should overwhelm,

Where we have fought and chasèd oft with darts.

With silver drops the meads yet spread for ruth,

In active games of nimbleness and strength,

Where we did strain, trailèd by swarms of youth,

Our tender limbs that yet shot up in length.

The secret groves which oft we made resound

Of pleasant plaint and of our ladies’ praise,

Recording soft what grace each one had found,

What hope of speed, what dread of long delays.

The wild forest, the clothèd holts with green,

With cry of hounds and merry blasts between,

Where we did chase the fearful hart a force.

The void walls eke that harbored us each night,

Wherewith, alas, revive within my breast

The sweet accord, such sleeps as yet delight,

The pleasant dreams, the quiet bed of rest,

The secret thoughts imparted with such trust,

The wanton talk, the divers change of play,

The friendship sworn, each promise kept so just,

Wherewith we passed the winter nights away.

And with this thought, the blood forsakes my face,

The tears berain my cheeks of deadly hue,

The which as soon as sobbing sighs, alas,

Upsuppèd have, thus I my plaint renew:

“O place of bliss, renewer of my woes,

Give me accompt, where is my noble fere,

Whom in thy walls thou didst each night enclose,

To other lief, but unto me must dear.”

Each stone, alas, that doth my sorrow rue,

Thus I alone, where all my freedom grew,

In prison pine with bondage and restraint.

And with remembrance of the greater grief

To banish the less, I find my chief relief.

O happy dames, that may embrace

The fruit of your delight,

Help to bewail the woeful case

And eke the heavy plight

Of me, that wonted to rejoice

The fortune of my pleasant choice:

In ship, freight with rememberance

Of thoughts and pleasures past,

He sails, that hath in governance

My life, while it will last;

With scalding sighs, for lack of gale,

Futhering his hope, that is his sail,

Toward me, the sweet port of his avail.

Alas, how oft in dreams I see

Those eyes, that were my food,

Which sometime so delighted me,

That yet they do me good;

Wherewith I wake with his return,

Whose absent flame did make me burn:

But when I find the lack, Lord how I mourn!

When other lovers in arms across

Drowned in tears to mourn my loss

I stand the bitter night

In my window, where I may see

Before the winds how the clouds flee.

Lo, what a mariner love hath made me!

And in green waves when the salt flood

Doth rise by rage of wind,

A thousand fancies in that mood

That with the spoil of my heart did go

And when the seas wax calm again,

To chese from me annoy,

My doubtful hope doth cause my plain,

So dread cuts off my joy.

Thus is my wealth mingled with woe,

And of each thought a doubt doth grow: