In this section, we strive to understand the ideas generated by the following important questions:

• How can a definite integral be used to measure the length of a curve?

• How can a definite integral be used to measure the surface area of a solid of revolution?

Indeed, for any non-

negative function f on an interval [a, b], we know that

Figure 6.19: The area between a nonnegative function f and the x-axis on the interval [a, b]. 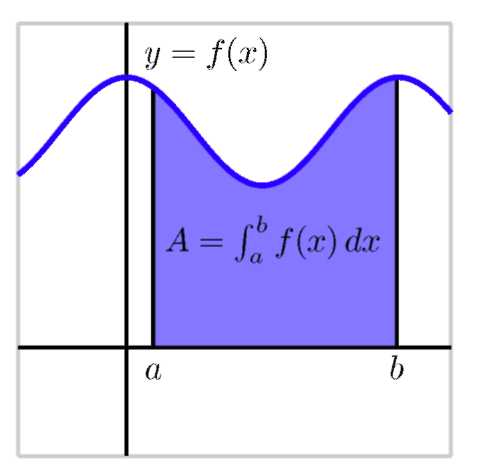 Use the distance formula to find the length of the

distance formula to find the length of the segment.

(d) Add the distances together to get an approximation to the length of the curve.

Finding the length of a curve

In addition to being able to use definite integrals to find the volumes of solids of revolution, we can also use the definite integral to find the length of a portion of a curve. We use the same fundamental principle: we take a curve whose length we cannot easily find, and slice it up into small pieces whose lengths we can easily approximate. In particular, we take a given curve and subdivide it into small approximating line segments, as shown at left in Figure 6.20. 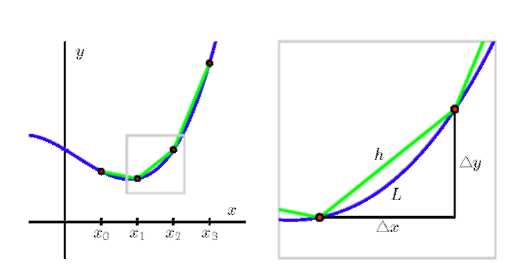 To see how we find such a definite integral that measures arc length on the curve y = f(x) from x = a to x = b, we think

about the portion of length,

that lies along the curve on

a small interval of length

and estimate the value of

using a well-chosen triangle. In particular, if we consider the right triangle with legs parallel to the coordinate axes and hypotenuse connecting two points on the curve, as seen at right in Figure 6.20, we see that the length, h, of the hypotenuse approx-

of the curve between the two selected

By algebraically rearranging the expression for the length of the hypotenuse, we see how a definite integral can be used to compute the length of a curve. In particular, observe that by remov-

ing a factor of 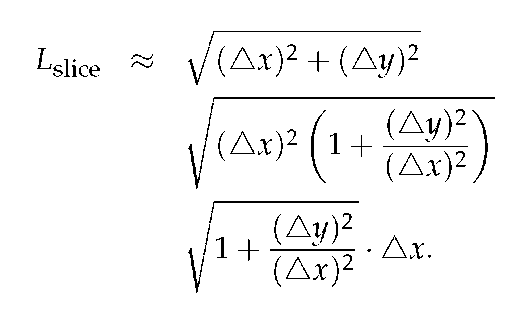 Thus, we can say that

Taking a Riemann sum of all of these slices and letting

we arrive at the following fact.

Solution. We begin by finding

Using the formula, we

find the arc length L as 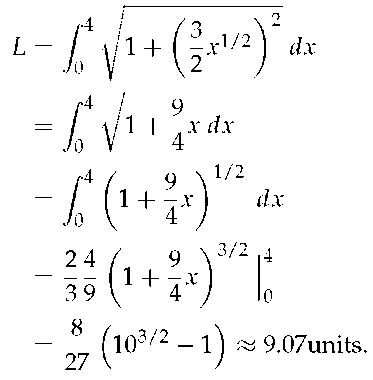 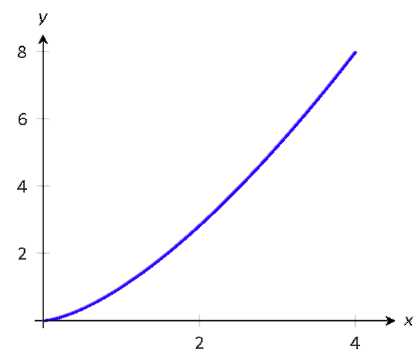 Solution. This function was chosen specifically because the resulting

integral can be evaluated exactly. We begin by finding

The arc length is 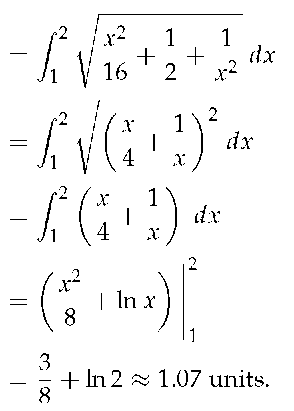 A graph of f is given in Figure 6.22; the portion of the curve measured in this problem is in bold. 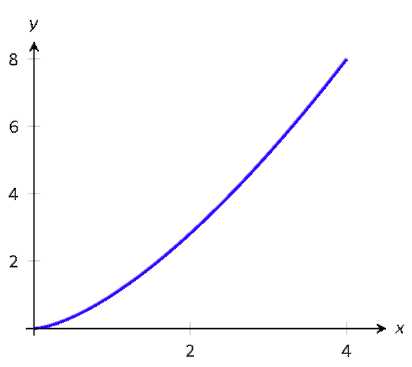 Solution. This is somewhat of a mathematical curiosity; in Activity 4.51 (b) we found the area under one "hump" of the sine curve is 2 square units; now we are measuring its arc length.

The setup is straightforward: f( x) = sin x and

This integral cannot be evaluated in terms of elementary functions so we will approximate it with Simpson's Method with n = 4.

evaluate a definite integral in Example 3.

evaluated at 5 evenly spaced points in

Simpson's Rule then states that

Using a computer with n = 100 the approximation is

approximation with n = 4 is quite good.

Each of the following questions somehow involves the arc length along a curve.

(a) Use the definition and appropriate computational technology to determine the arc length along y = x2 from x = — 1 to x = 1.

(b) Find the arc length of

this value in two different ways: (a) by using a definite integral, and (b) by using a familiar property of the curve.

(d) Will the integrals that arise calculating arc length typically be ones that we can evaluate exactly using the First FTC, or ones that we need to approximate? Why?

Surface Area of Solids of Revolution 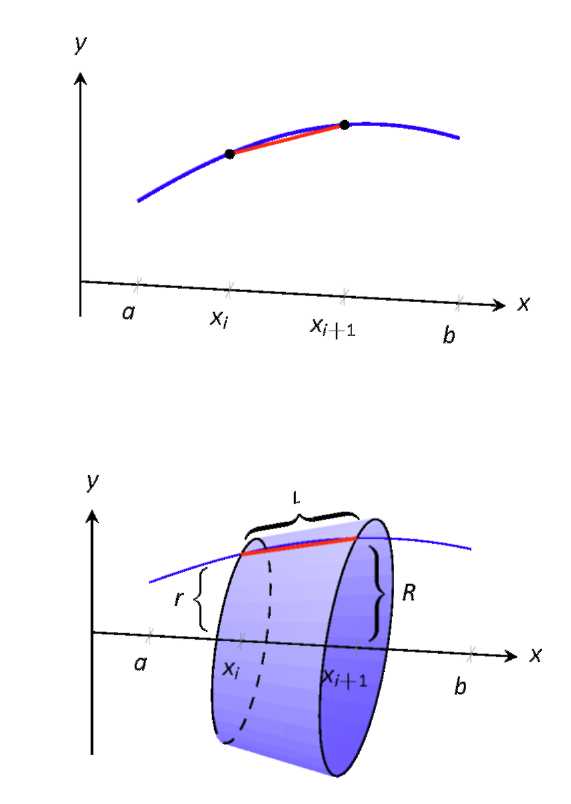 We have already seen how a curve y = f (x) on [a, b] can be revolved around an axis to form a solid. Instead of computing its volume, we now consider its surface area.

length • average of the two radii R and r.

The length is given by L; we use the material just covered by arc length to state that

for some ci in the ith subinterval. The radii are just the function evaluated at the endpoints of the interval. That is,

Since f is a continuous function, the Intermediate Value The-

orem states there is some di in [

we can use this to rewrite the above

which is a Riemann Sum. Taking the limit as the subinterval lengths go to zero gives us the exact surface area, given in the following Key Idea.

Surface Area of a Solid of Revolution

Let f be differentiable on an open interval containing [a, b]

1 ) The surface area of the solid formed by revolving the

about the x-axis is

2) The surface area of the solid formed by revolving the

When revolving y = f (x) about the y-axis, the radii

of the resulting frustum are xi and

age value is simply the midpoint of the interval. In the limit, this midpoint is just x.

Solution. The setup is relatively straightforward; we have the surface 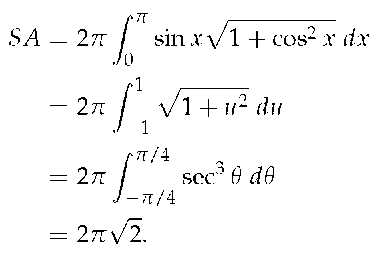 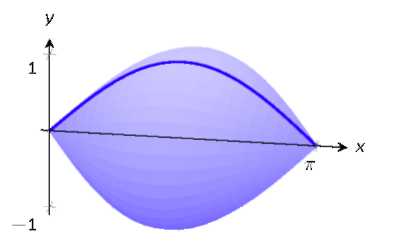 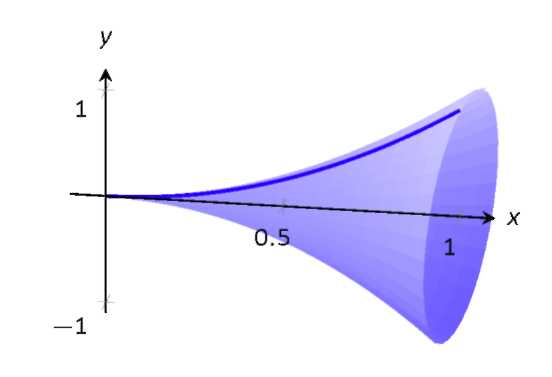 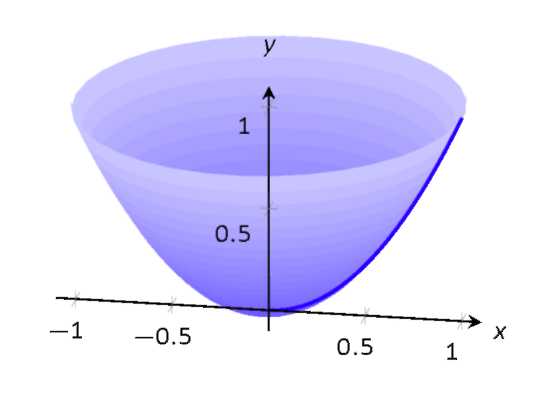 Find the surface area of the solid formed by revolving the curve y = x2 on [0, 1] about:

1) The integral is straightforward to setup:

Like the integral in Example 4, this requires Trigonometric Substitution.

2) Since we are revolving around the y-axis, the "radius" of the solid is not f( x) but rather x. Thus the integral to compute the surface area is: 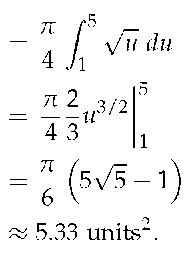 This last example is a famous mathematical "paradox." Example 6

Find the volume and surface area of this solid. (This shape, as graphed in Figure 6.26, is known as "Gabriel's Horn" since it looks like a very long horn that only a supernatural person, such as an angel, could play.) 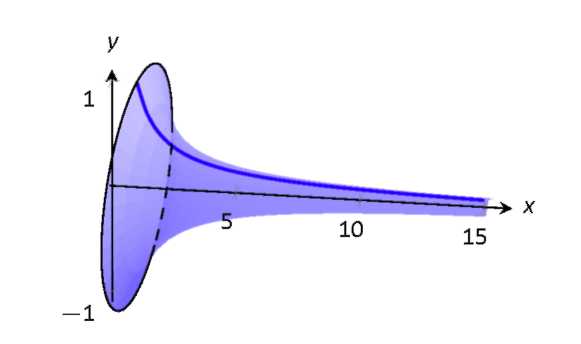 Solution. To compute the volume it is natural to use the Disk Method. We have: 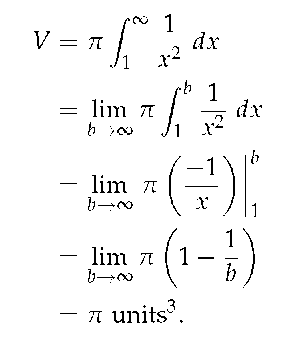 Gabriel's Horn has a finite volume of

cubic units. Since we have al-

ready seen that objects with infinite length can have a finite area, this is not too difficult to accept.

We now consider its surface area. The integral is straightforward to setup:

Integrating this expression is not trivial. We can, however, compare it to

other improper integrals. Since 1

Hence the "paradox": we can fill Gabriel's Horn with a finite amount of paint, but since it has infinite surface area, we can never paint it.

Somehow this paradox is striking when we think about it in terms of volume and area. However, we have seen a similar paradox before, as

referenced above. We know that the area under the curve

is finite, yet the shape has an infinite perimeter. Strange things can

occur when we deal with the infinite.

In this section, we encountered the following important ideas:

• To find the area between two curves, we think about slicing the region into thin rectangles. If, for instance,

In Exercises 3-11, find the arc length of the function on the given integral. 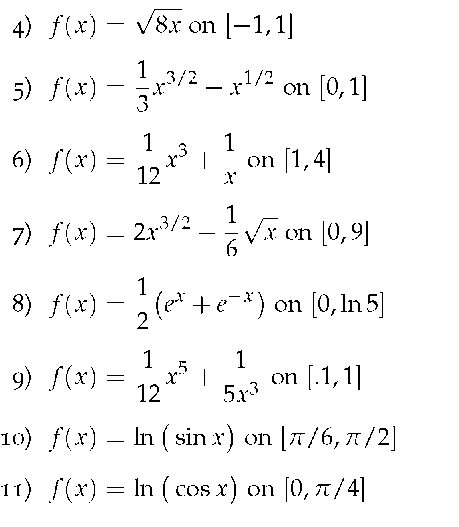 top half of a circle with radius 1.)

In Exercises 20-24, find the surface area of the described solid of revolution.

23) The solid formed by revolving y =

24) The sphere formed by revolving y =

4. Density, Mass, and Center of Mass