The Glorious Revolution of 1688 overthrew James II through Parliament’s joining with William of Orange; the revolution gloriously achieved its end without bloodshed. And in 1689, William III and Mary II took joint rule of England. Like Charles II, these monarchs had limited powers, delineated in the Bill of Rights Parliament presented to William III and Mary II. The Bill asserted the supremacy of Parliament and such civil rights as the prohibition of cruel and unusual punishment. These monarchs also assented to Parliament’s Toleration Act, giving greater freedom to Protestant Dissenters—though not to Roman Catholics. And in 1701, Parliament passed another Act intending to eliminate the threat of religious and political strife: The Act of Settlement that settled the succession to the English and Irish crowns on Protestants only. The next Protestant in line to the throne was the Electress Sophia of Hanover (1630-1714), a granddaughter of James VI of Scotland and I of England.

The reign of William III and Mary II was followed in 1702 by that of Anne, the younger daughter of James II. Through the 1707 Act of Union, she became the first sovereign of Great Britain. Even though Scotland and England shared a sovereign, Scotland had a separate government. With the Union, Scotland dissolved their government and became part of Great Britain. The two daughters of James II ruled while he was exiled in France. Their reigns denoted a new era of tolerance and comparative, though not complete, harmony. Continuing tensions balanced in the two-party Tory and Whig political system. The Tories aligned as supporters of the Stuart—“legitimate”—succession who were also strong for the Church of England and leery of Dissenters. Those uneasy about a Roman Catholic king were known as Whigs, a party that first emerged in 1680 due to worry about France and the possible return of the exiled family.

In foreign policy, tension rose over the ambitions of the French king Louis XIV (1638-1715). War-like, he was essentially determined to fight with whom he could. He enlarged France and brought on the War of the Spanish Succession (1701-1713). He wanted his grandson as king; others wanted an Austrian heir. England formed a Grand Alliance with Austria and the Dutch Republic, declaring war the year Anne began her reign. The war depleted France and made a hero out of England’s John Churchill, 1st Duke of Marlborough (1540-1722), who, together with his wife, persuaded Anne to favor the Whigs. When they tried to eliminate the Test Act, however, Anne caused a Tory ministry to form under the leadership of Robert Harley, the Earl of Oxford and Earl Mortimer (1661-1724), and Henry St. John, Viscount Bolingbroke (1678-1751). The death of Anne brought the Whigs back into power. 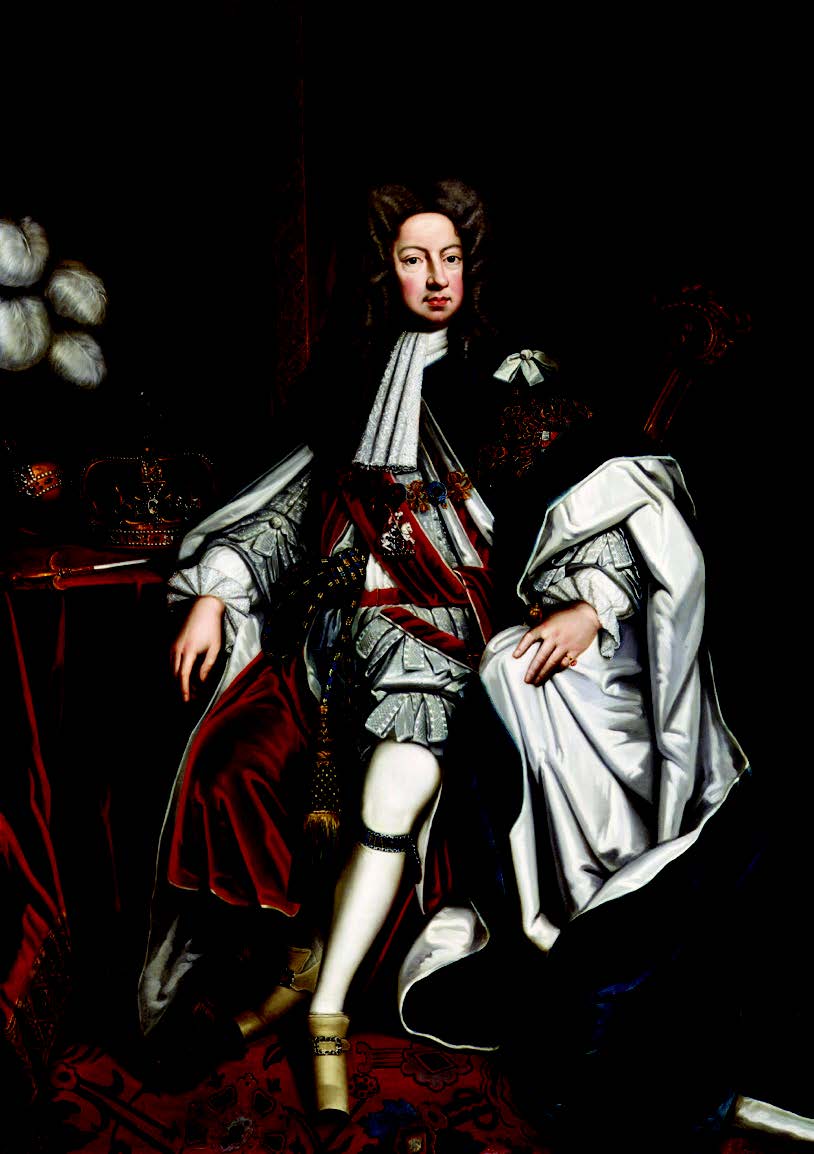 Although Anne and her husband had many children, none survived to adulthood. Upon her death in 1714, the crown did not return to the Stuart line. Instead, the eldest son of Sophia of Hanover, George Louis, Elector of Hanover, ascended as George I (1660-1727). Even though he accepted the British crown, George I preferred Hanover, never bothering to learn the English language. England saw many scandals associated with the House of Hanover, beginning with George I’s arriving in England with his mistress, Melusine von der Schulenburg (1667-1743), but not his wife, his first cousin Sophia Dorothea of Celle (1666-1694). The mother of George I’s two children, Sophia Dorothea of Celle may have turned to Count Philip Christoph von Konigsmarck (1665-1694) for consolation over her husband’s infidelity. Despite the fact that both husband and wife had their respective extra-marital affairs, George I kept Sophia Dorothea in prison until her death. Their son George II and great grandson George III would reign into the next century.

This line took succession peacefully; however, it was not uncontested. Both 1715 and 1745 saw Jacobite risings (Jacobite from the Latin Jacobus for James). The first was in support of James II’s son, James Francis Edward Stuart; the second, for Charles Edward Stuart (1720-1788), James II’s grandson, known as Bonnie Prince Charles. The latter rebellion proved particularly terrifying, with Jacobite forces marching south close towards London. Defeated at the Battle of Culloden (1745), the rebels were viciously punished, though Charles escaped to France.

At first much disliked by the British, the House of Hanover under the Georges gained greater respect as Britain saw increased prosperity particularly through commercial trade—that included slave trading—colonial expansion, and industrial progress culminating in the factory system. The application of the now-established new science and scientific method helped improve the human condition. The turn to reason was seen to obviate revelation—and revolution. Newton and science had helped establish a sense of law and order in the universe, a universe now seen as wrought by a creator but governed by the laws the creator set in motion, laws bound by and understood through reason (a view known as Deism).

Locke’s An Essay Concerning Human Understanding (1689) Book IV, Ch. 11 discusses sensations—our own being and intuition—and God as equaling reason (and vice versa). Influenced by Locke, David Hume (1711-1776) claimed that true history was made by the individual’s sensation of the particular. Human ideas of the world originated in their sensations of the world. Both he and Locke attacked the concept of innate ideas (ideas with which one is born) that predetermine individual character. Locke, the major English philosopher of the eighteenth century, validated the voice of experience and the acquisition of knowledge through sensation. He suggested that humans could get to God through experience and through reason. The state, government, politics, and human interactions all could be understood from a human—rather than divine—and rational perspective. The world adjusted to human measures and measurement, to the assertion (or reassertion) of classic virtues now seen as respect for rules and order. Neoclassical poetry particularly asserted the rules of balance, proportion, and restraint in both style—the heroic couplet—and subject.

The ascendancy of science and the scientific method heralded by Newton helped make the Royal Society an arbiter of style, that is, of prose style. The Royal Society had given its imprimatur to Newton’s Principia and, from its beginning through the eighteenth century, promoted the language of its members for their plain, unadorned style in recording (and accumulating) observable facts. The great achievement in prose, the novel, developed throughout the eighteenth century. It was seen as novel, that is, a new species of writing. Extended prose fiction developed as a genre in opposition to traditional genres which dealt with authority figures. Novels immersed characters from all classes in social experiences, quite otherwise than tragedy, epic, religious seventeenth-century poetry, or psalms. The novel elevated the realistic (or literal) and incorporated literal forms of discourse; consequently, the novel would include letters, household bills, contracts, depositions, and more (discourses that were excluded from traditional genres like the epic).

The novel began to take form about the individual, not the human being as a type. As a result of sensation—through which individuals acquire experience— the genre began to develop on its own as a way to advance a concept of character different from Aristotle’s (which was that character was coherent and consistent). This different concept infected other genres; for example, in drama, George Lillo (1691-1739) justified tragedy as melodrama (a mixture of genres) by explaining the need to expand Aristotle’s notion of tragic character in which only the highest and most noble character could evoke terror and pity in a fall. What became antithetical to tragedy was a new concept of place (as opposed to the classical unity of place). Movement in all forms became central to the novel. Experience is discovered in other places, so early eighteenth century novels moved from place to place. They incorporated travelogues. And they connected with other classes (not just the aristocratic) and cultures.

The novel was only one new kind of writing that developed throughout this century; others included the periodical essay, published in such vehicles as The Spectator and The Tattler; and the mock-heroic/anti-epic, involving the reworking and redefining of tragedy as a low form. A whole body of genres—drama, prose, and poetry—underwent revision, or innovation. One way to account for this greater variety—particularly with the development of the novel—and the relationship that these genres held to one another, is by considering audience.

After the Glorious Revolution, certain changes occurred in audience, in the reading public. One difference occurred through the way that printing was diffused in periodicals. In the eighteenth century, newspapers and dailies proliferated, with journalism establishing itself as a social and political force. Jonathan Swift and Daniel Defoe gained influence through their writing. Defoe probably influenced English involvement in the War of the Spanish Succession, while Swift’s The Conduct of the Allies (1711) certainly influenced demand for the war to end. Scientific observation, an appeal to the senses, and more coalesced in the concept of the spectator. Writers began to take on spectator roles and postures, acquiring a new manner of speaking to and conversing with an audience, their readers. That relation offered a reciprocal satisfaction of desires, with the writer having a benevolent interest in entertaining, informing, and educating readers, and was understood in the diffusion of information about politics, manners, fictions, and literature. A whole range of subject matter came to be discussed in print between authors and an audience conceived as a literate, though not a learned, group. And writing became concerned with education— particularly women’s education—and principled reason. The success of writers like Samuel Johnson, Swift, and Defoe attested to an audience separate from the Court, Church, and University, an audience that would reciprocally—and financially—support writers, thus freeing them from the patronage system.

Writers could now express diverse points of view and opinions independent of high-born and wealthy patrons, and ranging between parties; they could explore individual psychology, consciousness, and conscience. Aphra Behn, one of the first writers to live by the pen, allied herself with Tory attacks on slavery and the cult of the noble savage which became the fashion through her prose work Oroonoko. Though Swift began as a Whig, war and war-profiteers turned his sympathies towards the Tories. In Gulliver’s Travels, Swift would ferociously attack human nature in general and the Whigs in particular. Deism reached through Reason involved a conflict between those who believed in a revealed religion and those who believed in reason as a way to have religion. Defoe would explore the Tory Dissenter’s conscience in his contributions to the developing novel genre. The heroine of his Moll Flanders is immersed in a multiplicity of sensations—suffering, humor, love, death, goodness, and wickedness—and demonstrates how wickedness does not fate one to damnation, does not prevent penitence and redemption. The atomism, individualism, multiplicity, and diversity that began in the seventeenth century thus realized its literary form in the eighteenth-century novel.