Anne Finch published a collection of poetry; she wrote in various poetic forms, including elegies, pastorals, epistles, and ballads. She also wrote drama and an epilogue.

Anne Finch’s parents, Sir William Kingsmill and Anne Haslewood, both hailed from the landed gentry. Both died before Ann reached the age of three. She was then left in the care of a stepfather, an uncle, and a grandmother. Her father had taken the unusual step of providing for his daughter’s education in his will. Ann received an excellent education in English poetry and drama, the classics, and modern languages. She later advocated women’s education as a neglected right and means to elevate women’s position in society. 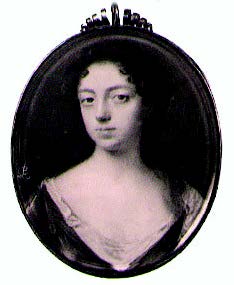 Probably due to her parents’ connections to royalty, Finch in 1683 entered the household of Mary of Modena Duchess of York, the second (and Roman Catholic) wife of James Stuart, Duke of York, the heir to the throne. The next year, she married Heanage Finch (1657-1726), a soldier and member of the Duke of York’s retinue.

Their marriage thrived. Her husband encouraged Finch’s writing, editing and transcribing her work and seeing to its private—though anonymous—circulation among friends. Her husband also remained loyal to the Stuarts after the deposition of James II and the ascension of William III and Mary II to the throne. Consequently estranged from the court, Finch and her husband removed to Eastwell Park in Kent, the country seat of his nephew, the 4th Earl of Winchilsea. Ann remained there with only sporadic visits to London and the Spa at Tunbridge Wells, to seek cure for ailments deemed due to “nerves.”

Despite living in comparative retirement, Finch remained active as a writer, sharing her work among friends. Her Pindaric Ode “The Spleen” was included in Gildon’s Miscellany, published in 1701. Finch’s husband became the 5th Earl of Winchilsea after his nephew’s death in 1712; the couple then returned to London, where Finch entered the public world of letters, socializing with writers like Alexander Pope, Jonathan Swift, and John Gay (1685-1732). Swift lauded Finch’s poetry in his own “Apollo Outwitted” (1711).

Finch often wrote in the classical style, using classical forms that she imbued with her own experience and views— particularly on the position of women in society. In and through her poetry, Finch contested the gendered occupations and opportunities to which women were limited, belying the objectifications and relative positions that defined and confined women. She achieved poetic fame both during and after her lifetime. The nineteenth century Romantics, including William Wordsworth (1770-1850), embraced Finch’s imagination and originality, particularly in her depictions of nature.

Did I, my lines intend for public view,

How many censures, would their faults pursue,

Some would, because such words they do affect,

And many have attained, dull and untaught,

The name of wit only by finding fault.

And all might say, they’re by a woman writ.

Alas! a woman that attempts the pen,

Such an intruder on the rights of men,

Such a presumptuous creature, is esteemed,

The fault can by no virtue be redeemed.

They tell us we mistake our sex and way;

Are the accomplishments we should desire;

To write, or read, or think, or to inquire

Would cloud our beauty, and exhaust our time,

And interrupt the conquests of our prime;

Whilst the dull manage of a servile house

Is held by some our outmost art, and use.

Sure ’twas not ever thus, nor are we told

Fables, of women that excelled of old;

To whom, by the diffusive hand of Heaven

On that glad day, on which the Ark returned,

The holy pledge, for which the land had mourned,

The joyful tribes, attend it on the way,

The Levites do the sacred charge convey,

Whilst various instruments, before it play;

The louder notes, to soften, and refine,

And with alternate verse complete the hymn divine.

Lo! the young Poet, after God’s own heart,

By Him inspired, and taught the Muses’ art,

That sing his slain ten thousand in the streets.

In such loud numbers they his acts declare,

Proclaim the wonders of his early war,

That Saul upon the vast applause does frown,

And feels its mighty thunder shake the crown.

What, can the threatened judgment now prolong?

Half of the kingdom is already gone;

The fairest half, whose influence guides the rest,

She fights, she wins, she triumphs with a song,

Devout, majestic, for the subject fit,

And far above her arms, exalts her wit;

Then, to the peaceful, shady palm withdraws,

And rules the rescued nation, with her laws.

How are we fall’n, fall’n by mistaken rules?

And education’s, more than nature’s fools,

Debarred from all improvements of the mind,

And to be dull, expected and designed;

And if some one would soar above the rest,

With warmer fancy, and ambition pressed,

The hopes to thrive can ne’er outweigh the fears,

Be cautioned then my Muse, and still retired;

Nor be despised, aiming to be admired;

To some few friends, and to thy sorrows sing;

For groves of laurel thou wert never meant;

Be dark enough thy shades, and be thou there content.

In such a night, when every louder wind

Is to its distant cavern safe confined;

And only gentle Zephyr fans his wings,

Or from some tree, famed for the owl’s delight,

In such a night, when passing clouds give place,

When in some river, overhung with green,

The waving moon and the trembling leaves are seen;

And where the sleepy cowslip sheltered grows;

Whilst now a paler hue the foxglove takes,

Yet checkers still with red the dusky brakes

When scatter’d glow-worms, but in twilight fine,

Whilst Salisb’ry stands the test of every light,

When odors, which declined repelling day,

And falling waters we distinctly hear;

When through the gloom more venerable shows

Some ancient fabric, awful in repose,

And swelling haycocks thicken up the vale:

When the loosed horse now, as his pasture leads,

Whose stealing pace, and lengthened shade we fear,

Till torn-up forage in his teeth we hear:

When nibbling sheep at large pursue their food,

And unmolested kine rechew the cud;

When curlews cry beneath the village walls,

And to her straggling brood the partridge calls;

Their shortlived jubilee the creatures keep,

Which but endures, whilst tyrant man does sleep;

And no fierce light disturbs, whilst it reveals;

But silent musings urge the mind to seek

Something, too high for syllables to speak;

Till the free soul to a composedness charmed,

Finding the elements of rage disarmed,

O’er all below a solemn quiet grown,

Joys in th’ inferior world, and thinks it like her own:

In such a night let me abroad remain,

Our cares, our toils, our clamors are renewed,

This moment is thy time to sing,

This moment I attend to praise,

And set my numbers to they lays.

Free as thine shall be my song;

As they music, short, or long.

Poets, wild as thee, were born,

When to please is least designed,

Soothing but their cares to rest;

Cares do still their thoughts molest,

Like thine, when best he sings, is placed against a thorn.

She begins, Let all be still!

Can thy words such accents fit,

Melt a sense that shall retain

Still some spirit of the brain,

’Twill not be! then change thy note;

Yet as far the Muse outflies.

Cease then, prithee, cease thy tune;

Trifler, wilt thou sing till June?

Till thy business all lies waste,

And the time of building’s past!

Thus we poets that have speech,

Unlike what they forests teach,

If a fluent vein be shown

That’s transcendant to our own,

Or censure what we cannot reach.