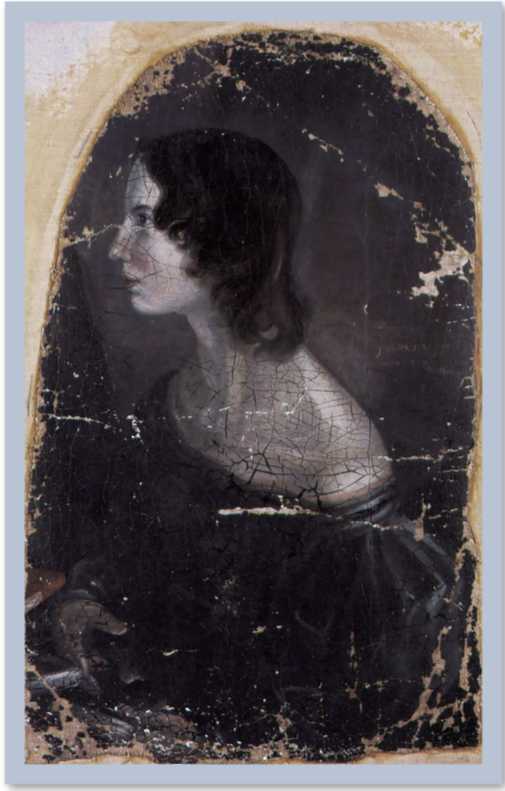 Charlotte, Emily, and Anne, the three surviving of the five daughters born to the Reverend Patrick Bronte and Maria Branwell, were early on inspired to climb to Olympian heights as poets and writers. The family’s economic ambitions centered on Branwell, the only son, who took advantage of the privileges given to Victorian males. Yet he recognized and shared in his sisters’ imaginative power and ambitions.

Branwell’s collection of tin soldiers and figurines of Turkish musicians and Indians led to their all creating, peopling, and chronicling the imaginary kingdoms of Angria and Gondol. Emily’s writings associated with these kingdoms, especially Gondol, are rife with contemporary figures drawn from newspapers and magazines such as Blackwell’s, as well as Romantic and Byronic figures drawn from histories, novels, and romances found in their father’s library. All of the Bronte sisters incorporated Romanticism into their poems and novels. Yet their work also displays Victorian concerns. Emily’s especially deal with the Victorian Crisis of Faith with her original and self-actuating—almost supernatural—spiritual vision. And her sharp focus on the natural environment is heightened by the Industrial Revolution’s depredations.

In 1845, Charlotte discovered a notebook of Emily’s poems and convinced Emily to publish them. Charlotte, Emily, and Ann collected their poems and published them at their own expense in Poems (1846). They used the gender-neutral pseudonyms of Currer, Ellis, and Acton Bell. It was followed a year later by Wuthering Heights, published by Thomas Newby. The novel’s affinities with Emily’s poems are clear in its tone of yearning, nature imagery, and titanic characterizations.

In 1848, Emily died of tuberculosis, having seen the mixed success of her work. To bolster its sales, Newby deliberately confused Wuthering Heights with Jane Eyre (1847). Possibly affected by the negative reception of some aspects of Jane Eyre, including what was deemed as its irreligious attack on the clergy in her depiction of Brocklehurst at Lowood School, Charlotte later mythologized her sister to some extent, smoothing her “coarseness” and censoring her revolutionary spiritual vision.

Nevertheless, Emily’s distinctive, lyrical, and powerful voice speaks out for itself. 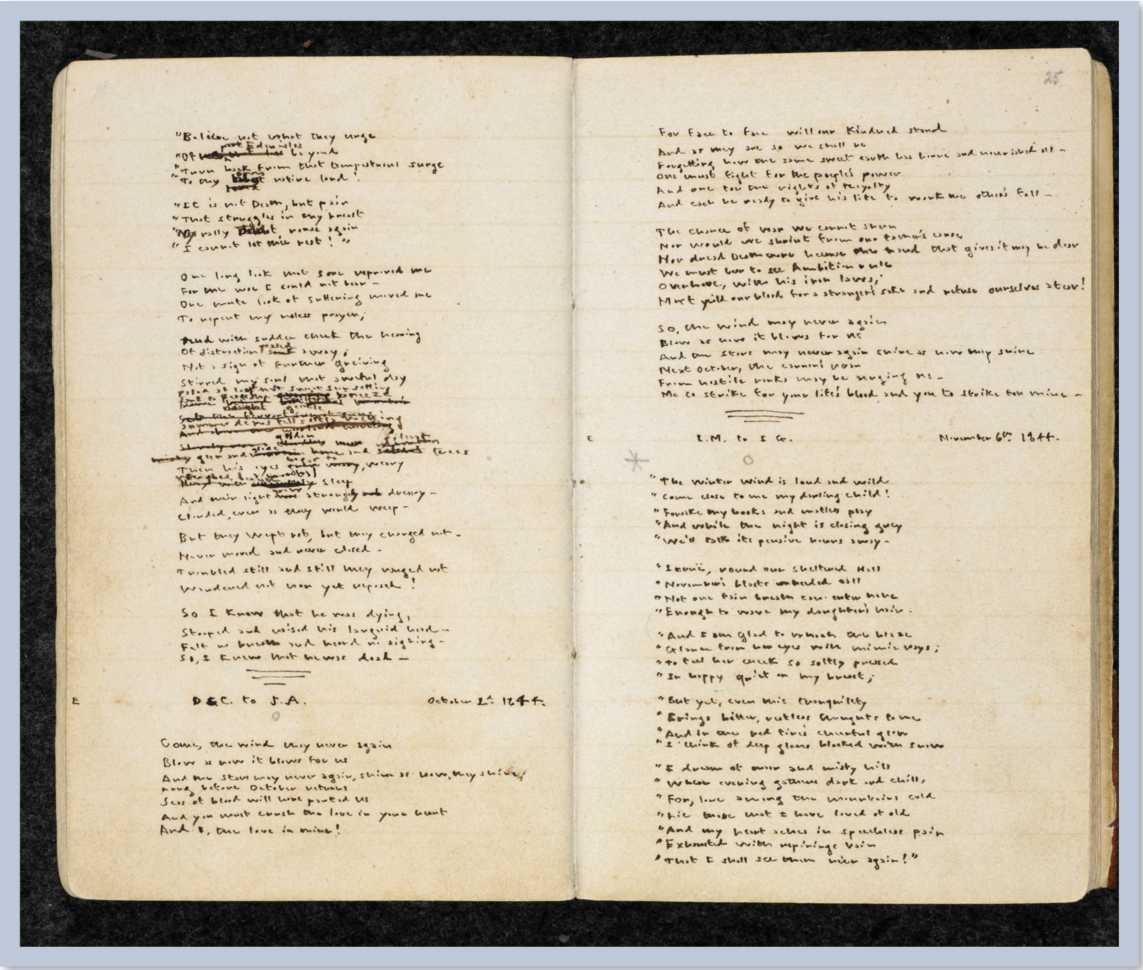 In the dungeon-crypts idly did I stray,

Reckless of the lives wasting there away;

He dared not say me nay—the hinges harshly turn.

'Our guests are darkly lodged,' I whisper'd, gazing through

(This was when glad Spring laughed in awaking pride);

I scoffed, as the chill chains on the damp flagstones rung:

'Confined in triple walls, art thou so much to fear,

That we must bind thee down and clench thy fetters here?'

The captive raised her face; it was as soft and mild

It was so soft and mild, it was so sweet and fair,

Pain could not trace a line, nor grief a shadow there!

The captive raised her hand and pressed it to her brow;

'I have been struck,' she said, 'and I am suffering now;

Yet these are little worth, your bolts and irons strong;

And, were they forged in steel, they could not hold me long.'

Hoarse laughed the jailor grim: 'Shall I be won to hear;

Dost think, fond, dreaming wretch, that I shall grant thy prayer?

Or, better still, wilt melt my master's heart with groans?

Ah! sooner might the sun thaw down these granite stones.

'My master's voice is low, his aspect bland and kind,

But hard as hardest flint the soul that lurks behind;

And I am rough and rude, yet not more rough to see

Than is the hidden ghost that has its home in me.'

About her lips there played a smile of almost scorn.

'My friend,' she gently said, 'you have not heard me mourn;

When you my kindred's lives, my lost life, can restore,

Then may I weep and sue,—but never, friend, before!

'Still, let my tyrants know, I am not doomed to wear

Year after year in gloom, and desolate despair;

A messenger of Hope comes every night to me,

'He comes with western winds, with evening's wandering airs,

With that clear dusk of heaven that brings the thickest stars.

Winds take a pensive tone, and stars a tender fire,

And visions rise, and change, that kill me with desire.

'Desire for nothing known in my maturer years,

When Joy grew mad with awe, at counting future tears.

When, if my spirit's sky was full of flashes warm,

I knew not whence they came, from sun or thunder-storm.

'But, first, a hush of peace—a soundless calm descends;

The struggle of distress, and fierce impatience ends;

That I could never dream, till Earth was lost to me.

'Then dawns the Invisible; the Unseen its truth reveals;

My outward sense is gone, my inward essence feels:

Its wings are almost free—its home, its harbour found,

Measuring the gulph, it stoops and dares the final bound.

'Oh! dreadful is the check—intense the agony—

When the ear begins to hear, and the eye begins to see;

When the pulse begins to throb, the brain to think again;

'Yet I would lose no sting, would wish no torture less;

The more that anguish racks, the earlier it will bless;

And robed in fires of hell, or bright with heavenly shine,

If it but herald death, the vision is divine!'

She ceased to speak, and we, unanswering, turned to go—

We had no further power to work the captive woe:

Her cheek, her gleaming eye, declared that man had given

A sentence, unapproved, and overruled by Heaven.

When weary with the long day's care,

﻿And earthly change from pain to pain,

And lost, and ready to despair,

﻿Thy kind voice calls me back again,

Oh, my true friend! I am not lone,

While then canst speak with such a tone!

So hopeless is the world without;

﻿The world within I doubly prize;

Thy world, where guile, and hate, and doubt,

Where thou, and I, and Liberty,

What matters it, that all around

﻿Danger, and guilt, and darkness lie,

If but within our bosom's bound

﻿We hold a bright, untroubled sky,

Of suns that know no winter days?

And tell the suffering heart how vain

﻿Its cherished dreams must always be;

And Truth may rudely trample down

The flowers of Fancy, newly-blown:

But thou art ever there, to bring

﻿The hovering vision back, and breathe

﻿And call a lovelier Life from Death.

And whisper, with a voice divine,

Of real worlds, as bright as thine.

I trust not to thy phantom bliss,

﻿Yet, still, in evening's quiet hour,

Sure solacer of human cares,

And sweeter hope, when hope despairs!

Silent is the house: all are laid asleep:

One alone looks out o'er the snow-wreaths deep,

Watching every cloud, dreading every breeze

That whirls the wildering drift, and bends the groaning trees.

Cheerful is the hearth, soft the matted floor;

Not one shivering gust creeps through pane or door;

I trim it well, to be the wanderer's guiding-star.

Set your slaves to spy; threaten me with shame:

But neither sire nor dame, nor prying serf shall know,

What angel nightly tracks that waste of frozen snow.

What I love shall come like visitant of air,

What loves me, no word of mine shall e'er betray,

Though for faith unstained my life must forfeit pay.

He for whom I wait, thus ever comes to me;

Strange Power! I trust thy might; trust thou my constancy.

No coward soul is mine,

No trembler in the world's storm-troubled sphere:

And faith shines equal, arming me from fear.

﻿﻿O God within my breast,

﻿﻿Life—that in me has rest,

﻿﻿Vain are the thousand creeds

Or idle froth amid the boundless main,

﻿﻿To waken doubt in one

Holding so fast by Thine infinity;

﻿﻿So surely anchored on

The stedfast rock of immortality.

﻿﻿Pervades and broods above,

﻿﻿Though earth and man were gone,

And suns and universes ceased to be,

﻿﻿And Thou were left alone,

Every existence would exist in Thee.

﻿﻿There is not room for Death,

﻿﻿Thou—Thou art Being and Breath,

And what Thou art may never be destroyed.

I'm happiest now when most away

I can tear my soul from its mould of clay,

On a windy night when the moon is bright,

And my eye can wander through worlds of light.

When I am not, and none beside,

﻿Nor earth, nor sea, nor cloudless sky,

But only spirit wandering wide