Students will be able to

Learning a programming language is similar to learning a foreign language, such as French. The ultimate goal of learning a foreign language is to be able to compose sentences to communicate (the communication problem). Similarly, the ultimate goal of learning to program is to write proper statements that solve a particular problem, such as calculating the volume of a sphere or calculating the projectile of a rocket.

A programming language offers its set of different types of statements for programmers to use. Before you can write code using a type of statements, you need to learn its

For French, syntax is the grammar of the language and semantics is what a sentence means. For programming, when we specify how the code should look like and structural rules, we are talking about syntax. Programming languages, such as Java, have very strict syntax rules, much stricter than a natural language (e.g. French). If your code does not comply with the syntax rules, the compiler (the translator) will not understand your code and therefore cannot translate your code into machine code that can be executed on CPU.

In order to learn how to compose the right sentences in French to convey certain meanings, you will normally first do some reading comprehension exercises to learn how to interpret what sentences mean. Similarly, in order to write code to solve a problem, you first need to read code written by others and understand what that code does. What a piece of code does is similar to the meaning of a sentence in a foreign language. We call this semantics of the code. Only if you understand the semantics (the behavior) of code can you compose the right code to have the desired behaviors.

Through syntax and semantics learning, you will build your tool set of a programming language’s different types of statements. When the times come to write code to solve a problem, you need to pick up the right statements and use them in the right way and right order to achieve the desired behavior.

The semantics of statement (an instruction written in high-level programming language, defined in the section above) is what it does on a computer. We need some very basic understanding and vocabulary in order to be able to state the behavior of a statement.

Second, watch this video on YouTube for a more detailed explanation about how CPU execute instructions in stored in memory: YouTube video (It’s less than 8 mins and please be patient and watch the whole video.)

We can see that memory holds instructions and data. Each memory location has a unique address. Instructions are fetched by CPU and executed by CPU. Besides the instructions, memory also holds data that need to be manipulated by the program.

Computer programs, known as software, are instructions to the computer.

You tell a computer what to do through programs. Without programs, a computer is an empty machine. Computers do not understand human languages, so you need to use computer languages to communicate with them.

It is a machine language and only a computer is capable of reading and interpreting the low-level languages of a collection of binary digits or bits.

It is much easier to program in a "high-level language". Programs take less time to write, they are shorter and easier to read, and they are more likely to be correct. "High-level languages" are portable, meaning they can run on different kinds of computers with few or no modifications. Low-level programs can only run on one kind of computer, and have to be rewritten to run on another.

These complements are used to make the arithmetic operation in the digit system easier.

We can illustrate the use of complements by taking 4206. The nine’s complement of 4206 will be

We can illustrate the example of binary complements as below.

An algorithm specifies a series of steps that perform a particular computation or task. Algorithms were originally born as part of mathematics - the word "algorithm" comes from the writer Muhammad ibn Musa-al-Khwarizmi - but currently the word is associated with computer science.

In programming, each step should be clear and defined precisely to solve a particular problem most effectively.

What is Algorithm in brief? - Video Clip Resource

Write an algorithm to add two numbers entered by user:

Write an algorithm to calculate and record the interest on a home mortgage for a client.

(Assuming that balance of the mortgage and the interest rate appear in the client’s record - a collection of related data items. e.g. data on a given client, and a file is a collection of similar records) - Flowchart is provided in Figure 1.

Step 2: Obtain name, balance, and rate from the client’s record.

Step 4: Record client’s name and interest in the interest file.

More examples of Algorithm in Programming

There are two ways of presenting an algorithm. One way is by a flowchart and another way is to write it in pseudocode language. Figure 1 shows two flowcharts. First one is based on the mortgage interest algorithm and second flowchart reads two numbers, a and b. Then prints them in descending order, after assigning the larger number to big and the smaller number to small. Two arrows leaving the decision if a < b. If the answer is no, it is labeled "no" and the other labeled "yes". 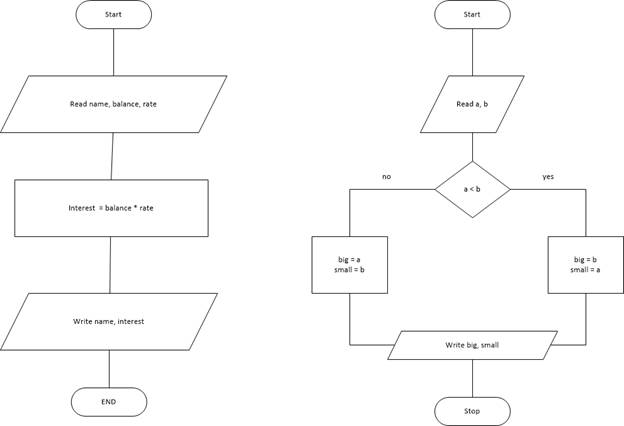 When MyFirstJava program runs it displays:

If you compare this output with the original code of MyFirstJava, you will find there is no double quotations. My First Java! is a String literal in the code and it is defined by using double quotation like System.out.println("My First Java!"). System.out.println is to display the String literal you want to print out on the console/screen (Read more)

"System.out.println displays results on the screen; the name println stands for “print line”. Confusingly, print can mean both “display on the screen” and “send to the printer”. In this book, we’ll try to say “display” when we mean output to the screen. Like most statements, the print statement ends with a semicolon (;).

Java is “case-sensitive”, which means that uppercase and lowercase are not the same. In this example, System has to begin with an uppercase letter; system and SYSTEM won’t work."

Class and Methods in brief

A method is a named sequence of statements. This program defines one method named main:

public static void main(String[] args) The name and format of main is special: when the program runs, it starts at the first statement in main (All java programs begin here) and ends when it finishes the last statement. Later, we will see programs that define more than one method.

System.out.println appends a newline. This newline starts from the beginning of the next line. If you want to make the String phrases appear in one line, then use print instead of println (see below example).

ClassName is written by a programmer and from the example above, MyFirstJava is the class name.

main is a special method which makes the program execute and println means display a message on the screen. The println statement terminates with a semi-colon(;).

1.13.5. Use of println with ThreeMessages

You must first set up the environment to compile and execute java programs. To be able to compile and run programs, you must install the JDK and configure it. Java SE 12.0.1 is the latest release for the Java SE Platform (as of June 09, 2019). Orale JDK

1.14.3. Compiling and Running a Simple Program

1.15.1. Write a program named Banana.java that displays as below:

1.15.2. Write a program named Fibonacci.java that displays the result of

1.15.3. Determine the nines complements of the decimal numbers:

1.15.4. Determine the one’s and two’s complements of the binary numbers:

1.15.5. Convert each binary number to its decimal equivalent:

1.15.6. Convert each decimal number to its binary equivalent:

1.15.7. Write a program named Formula.java that displays the result of

1.15.8. Write a program named Molecular.java that displays the following table:

Susan and Jean just started collecting stamps as a hobby. Susan has 8 endangered animal collection stamps and Jean has 40 racing car collection stamps. How many more does Jean have than Susan? Write a program named Stamps.java that compute the difference between Jean’s and Susan’s collections of the stamps.

Write a program named FindX.java to compute the number X based on the following formula:

Assume that there are 389 students in a small middle school. There are 175 female students. Write a program named MaleStudent.java to compute how many students are male in this middle school.

Write a program named Circle.java that displays the area and perimeter of a Circle that has a radius of 9.5 using the following formula: