The Dream of the Rood dates from at least the early eighth century, when eighteen verses of it were carved on the Ruthwell Cross in runic letters. The Ruthwell Cross, in southern Scotland, stands over eighteen feet tall and includes Gospel scenes, Latin inscriptions, and elaborately-carved vines in addition to the fragment of The Dream of the Rood. Like other Anglo-Saxon poems, The Dream of the Rood uses alliteration rather than rhyme; it is divided into half-lines (with a pause, or caesura, in the middle) that vary between short rhythmic sections and longer hypermetrical sections (with more syllables). The 156 lines of the complete poem are found in the tenth century Vercelli Book, a manuscript rediscovered in 1822, in the cathedral in Vercelli, in northern Italy. 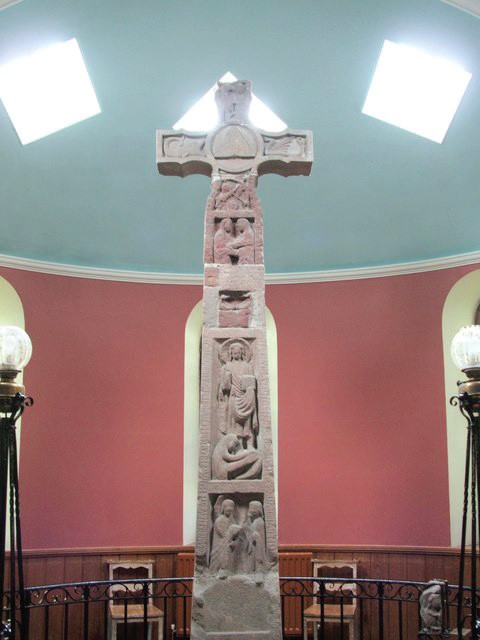 Just as the Ruthwell Cross is meant to appeal to a variety of audiences, the poem presents a Christian subject (the Crucifixion) in a way that would appeal to the traditions of a warrior class only recently converted to Christianity in some cases. Warriors followed a lord (who could be a king or a chieftain), who distributed gold and other rewards to loyal retainers. When the Rood (Cross) speaks of its history, from tree to loyal retainer of Christ (his liege lord/Lord), it describes Christ as a warrior who climbs up onto the cross freely and bravely to defeat sin. An Anglo-Saxon audience could not help but see a comparison to Odin/Woden sacrificing himself on the Tree of Life (Yggdrasil) to gain the secret of the runes, the very language in which the fragment is written. The poem is also a dream vision, a popular genre in medieval English literature (see, for example, Chaucer’s Parlement of Fowles, found in this anthology). When the dreamer awakes, he longs to rejoin his companions, who have gone on to feast at the Lord’s table in heaven: a situation similar to that found in the Anglo-Saxon poem The Wanderer (also in the anthology). Near the end, the dreamer refers to Christ saving those who “suffered the burning,” an indirect reference to the popular Harrowing of Hell, found in the (now) apocryphal Gospel of Nicodemus and in numerous medieval works, from mystery plays to Dante’s Divine Comedy. In it, Christ descends to Hell after the Crucifixion, breaks open the gate, scatters the demons, and frees all the righteous souls, leading them to heaven. The reference survives to the present day in the Apostle’s Creed, which states that Christ “descended into hell” (or in some recent versions “descended to the dead”). The poem therefore celebrates Christ’s victories in battle, eschewing the later medieval focus on Christ’s suffering and image as the lamb of God. 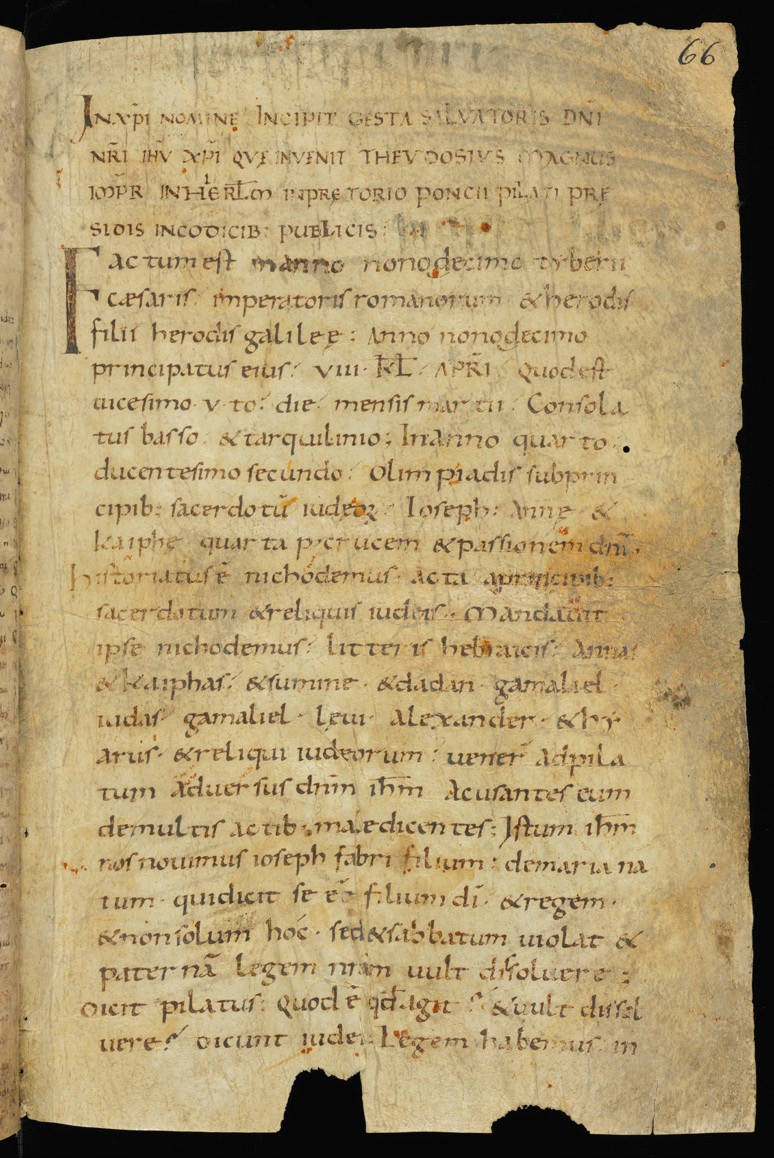 Image 1.4 | The Gospel of Nicodemos

Lo! choicest of dreams I will relate,

What dream I dreamt in middle of night

When mortal men reposed in rest.

Methought I saw a wondrous wood

Brightest of trees; that beacon was all

Begirt with gold; jewels were standing

Four at surface of earth, likewise were there five

Above on the shoulder-brace. All angels of God beheld it,

But holy spirits beheld it there,

Men upon earth, all this glorious creation.

Strange was that victor-tree, and stained with sins was I,

With foulness defiled. I saw the glorious tree

Begirt with gold; bright gems had there

Worthily decked the tree of the Lord.

Old strife of the wretched, that first it gave

Blood on the stronger [right] side. With sorrows was I oppressed,

Afraid for that fair sight; I saw the ready beacon

Change in vesture and hue; at times with moisture covered,

Soiled with course of blood; at times with treasure adorned.

Yet lying there a longer while,

Beheld I sad the Saviour’s tree

Until I heard that words it uttered;

The best of woods gan speak these words:

“’Twas long ago (I remember it still)

That I was hewn at end of a grove,

Stripped from off my stem; strong foes laid hold of me there,

Wrought for themselves a show, bade felons raise me up;

Men bore me on their shoulders, till on a mount they set me;

Fiends many fixed me there. Then saw I mankind’s Lord

Hasten with mickle might, for He would sty upon me.

There durst I not ’gainst word of the Lord

Bow down or break, when saw I tremble

My foes have felled, yet fast I stood.

The Hero young begirt Himself, Almighty God was He,

Strong and stern of mind; He stied on the gallows high,

Bold in sight of many, for man He would redeem.

I shook when the Hero clasped me, yet durst not bow to earth,

Fall to surface of earth, but firm I must there stand.

A rood was I upreared; I raised the mighty King,

The Lord of Heaven; I durst not bend me.

They drove their dark nails through me; the wounds are seen upon me,

The open gashes of guile; I durst harm none of them.

They mocked us both together; all moistened with blood was I,

Shed from side of the man, when forth He sent His spirit.

Many have I on that mount endured

Of cruel fates; I saw the Lord of Hosts

Strongly outstretched; darkness had then

Covered with clouds the corse of the Lord,

The brilliant brightness; the shadow continued,

Wan ’neath the welkin. There wept all creation,

Bewailed the King’s death; Christ was on the cross.

Yet hastening thither they came from afar

To the Son of the King: that all I beheld.

Sorely with sorrows was I oppressed; yet I bowed ’neath the hands of men,

Lowly with mickle might. Took they there Almighty God,

Him raised from the heavy torture; the battle-warriors left me

To stand bedrenched with blood; all wounded with darts was I.

There laid they the weary of limb, at head of His corse they stood,

Beheld the Lord of Heaven, and He rested Him there awhile,

Worn from the mickle war. Began they an earth-house to work,

Men in the murderers’ sight, carved it of brightest stone,

The wretched at eventide; then would they back return

Mourning from the mighty prince; all lonely rested He there.

Yet weeping we then a longer while

Stood at our station: the [voice] arose

Of battle-warriors; the corse grew cold,

Fair house of life. Then one gan fell

Us all to earth; ’twas a fearful fate!

One buried us in deep pit, yet of me the thanes of the Lord,

His friends, heard tell; [from earth they raised me],

And me begirt with gold and silver.

That bale of woes have I endured,

Of sorrows sore. Now the time is come,

That me shall honor both far and wide

Men upon earth, and all this mighty creation

Will pray to this beacon. On me God’s Son

I tower to Heaven, and I may heal

Each one of those who reverence me;

Of old I became the hardest of pains,

Most loathsome to ledes [nations], the way of life,

Lo! the Lord of Glory honored me then

Above the grove, the guardian of Heaven,

As He His mother, even Mary herself,

Almighty God before all men

Worthily honored above all women.

That thou this sight shalt say to men,

Reveal in words, ’tis the tree of glory,

On which once suffered Almighty God

For the many sins of all mankind,

And also for Adam’s misdeeds of old.

Death tasted He there; yet the Lord arose

Then stied He to Heaven; again shall come

Upon this mid-earth to seek mankind

At the day of doom the Lord Himself,

Almighty God, and His angels with Him;

Then He will judge, who hath right of doom,

Each one of men as here before

In this vain life he hath deserved.

No one may there be free from fear

In view of the word that the Judge will speak.

He will ask ’fore the crowd, where is the man

Who for name of the Lord would bitter death

Be willing to taste, as He did on the tree.

But then they will fear, and few will bethink them

What they to Christ may venture to say.

Then need there no one be filled with fear

Who bears in his breast the best of beacons;

But through the rood a kingdom shall seek

From earthly way each single soul

That with the Lord thinketh to dwell.”

Then I prayed to the tree with joyous heart,

With small attendance; the thought of my mind

For the journey was ready; I’ve lived through many

Hours of longing. Now ‘tis hope of my life

That the victory-tree I am able to seek,

Oftener than all men I alone may

Honor it well; my will to that

Is mickle in mind, and my plea for protection

To the rood is directed. I’ve not many mighty

Of friends on earth; but hence went they forth

From joys of the world, sought glory’s King;

Now live they in Heaven with the Father on high,

In glory dwell, and I hope for myself

On every day when the rood of the Lord,

Which here on earth before I viewed,

In this vain life may fetch me away

And bring me then, where bliss is mickle,

Joy in the Heavens, where the folk of the Lord

Is set at the feast, where bliss is eternal;

And may He then set me where I may hereafter

In glory dwell, and well with the saints

Of joy partake. May the Lord be my friend,

Who here on earth suffered before

On the gallows-tree for the sins of man!

He us redeemed, and gave to us life,

A heavenly home. Hope was renewed,

With blessing and bliss, for the sufferers of burning.

The Son was victorious on that fateful journey,

Mighty and happy, when He came with a many,

With a band of spirits to the kingdom of God,

The Ruler Almighty, for joy to the angels

And to all the saints, who in Heaven before

In glory dwelt, when their Ruler came,

Almighty God, where was His home.