Many students are aware of bands because most schools have marching band and concert bands; however, the world of band music is quite refined and some great works of music have been written for the “wind band.” In the Classical Era the “wind band” was basically the orchestra, without strings. Over the centuries new instruments were added and composers wrote some amazing music for what is now called a Concert Band or Wind Ensemble. Before we discuss a few of these instruments, please take a few minutes to listen to at least 4 minutes one two of these works.

EXAMPLE: “I. Prologue” from Divertimento for Band, Op. 42 Vincent Persichetti (this complete work is available in the OPTIONAL COMPOSER FILES for this Appendix)

Around 300 years ago composers began to write music for the orchestra that excluded the string instrument family. This gave birth to what became known as the “wind band.” Over the centuries other wind instruments have been added, including some strictly for the marching band. We will examine only a few of the most common here.

The saxophone is one of the most recognizable band instruments. People often think that the saxophone belongs in the brass family because it is made primarily of brass; however, saxophones use the same type of reeds that are used with clarinets.

The saxophone was invented by Adolphe Sax in the early 1840s as a way of improving the sound of the bass clarinet. Today saxophones are found in all school bands, and have been widely used in the music of jazz. The saxophone became a favorite jazz instrument because it can emulate the nuances of the human voice. As with the clarinets and flutes, there is an entire family of saxophone including:

The list above clearly demonstrates how these instruments are related to the voice categories for singers. 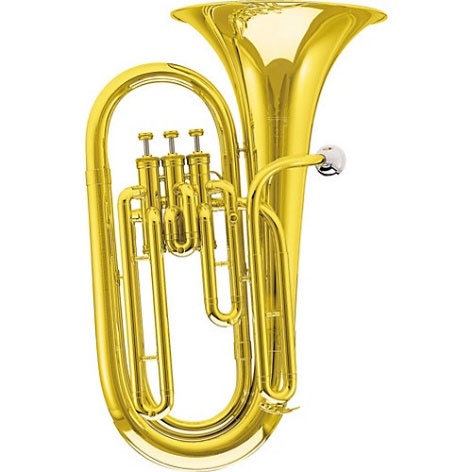 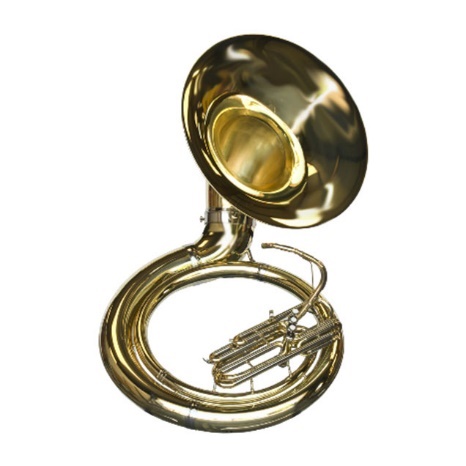 The most common band instruments that are not found in the orchestra are the baritone horn and the Sousaphone. The baritone horn plays mainly in the same register as the trombone, however, the timbre of the baritone is a much more “round” and “full” sound. The Sousaphone was invented by John Phillip Sousa, the famous composer of marches. The Sousaphone is essentially a tuba; however, the opening of the concert tuba (called the bell) points up because it is used indoors and the sound is reflected off the ceiling. Since a marching band plays outdoors, the tuba sound was being lost until Sousa decided to build a tuba that could be held on a shoulder with the bell facing forward. This allows the sound to better blend with the other instruments.

More than the other families, the band utilizes many percussion instruments that are seldom used in an orchestra. These include both instruments of definite pitch and those of indefinite pitch. Many of these instruments come from different cultures as well.

Among the instruments of definite pitch are the marimba, vibraphone and crotales. The vibraphone, or vibes, have been used in jazz music by some extraordinary vibists for the past century. For more information on percussion instruments, please search online. For a demonstration of the vibraphone in a jazz setting, please check out the YouTube link.

The drum set is sometimes used in concert bands, but it has become a standard instrument in jazz, rock, country, hip-hop, and other popular music genres. The drummer’s main role in these groups is to keep the beat steady and provide the proper rhythmic pattern for each song. Some drummers have gone far beyond this by become virtuosos in their own right. 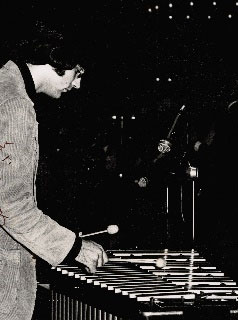 The guitar has been one of the most popular instruments of the past 70 years. The history of this instrument goes much, much further back in history. Evidence of instruments that resemble the guitar suggests that they were used as far back as the ancient Sumerians (around 2500 BC). Hieroglyphics in Egypt show instruments with strings that were plucked to create sound. The oldest known guitar like instrument that has been preserved dates to 1503 BC (www.guyguitars.com). The ancient Greeks used instruments that resemble the lute, which looks similar to a guitar, but has a larger body. The ancient Romans also had a type of guitar. The guitars of Ancient Rome and through the Middle Ages usually had 4 strings, sometime there were 4 pairs of strings. 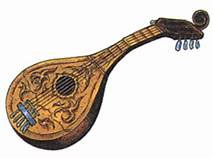 During the Renaissance era, the lute became a popular instrument. Not only was it used in making folk music (popular music of the culture, usually for dancing), but many composers began writing music specifically for the lute. We will examine some of the music later in the course. At the same time a 5-string guitar appeared in Italy. 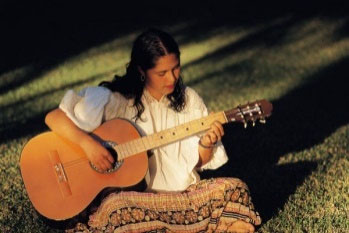 The guitar was somewhat standardized at the end of the 19th century. Steel strings came into use and, in the 1920s, the electric guitar was born. This paved the way for the electric bass guitar that is used in most music today. Today we have many types of guitars, both electric and acoustic (an acoustic instrument is one that does not require electricity to produce sound) and guitars are used in jazz, rock, hiphop, folk, country and classical music. The flamenco guitarists of Spain are quite amazing to see and hear.

One of the first electronic instruments was the Theremin, invented by a Russian inventor Léon Theremin. The Theremin was used in movies as far back as the 1930s. It was widely used in suspense and science fiction movies through the 1950s and continued to be used for many years after that. This instrument is played by moving both hands around two metal rods. There are no keys and the instrument is never touched. Theremin kits are still available to buy. Please visit the link below to see the instrument played by the inventor.

In the 1920’s and 1930’s analog synthesizers were built using electronic circuits, amplifiers, resistors and vacuum tubes. The instruments created sound waves that were modified by filters to create music. These were not commercially available because of the restrictive cost. It was not until around the 1960’s when synthesizers started to be used in commercial music. In 1968, American composer Wendy Carlos released an album entitled Switched-On Bach. This was an album of works written by Baroque composer Johann Sebastian Bach and performed on a Moog synthesizer. The Moog synthesizer was first used in the movie On Her Majesty’s Secret Service in 1969. Since then movie composers have made use of synthesizers to add to their orchestral scores.

Around 1970 commercial synthesizers started to make their way into popular music. The first commercially used synthesizers used a piano-like keyboard and were only able to play one pitch at a time; in other words, they were monophonic instruments. Eventually polyphonic synthesizers became available, starting with keyboards that could produce around 8 pitches at any one time and eventually adding more and move polyphonic options. Early synthesizers were known mainly for their very electronic sounds. The invention of FM synthesis (frequency-modulated synthesis) allowed machines to create sounds that sounded somewhat like real instruments. However, it was not until sampling was invented did electronic music begin to sound more realistic.

“Sampling” is the process or recording sounds and then using those recordings to create new music. Although this dates back to the 1940s, it was not until the developments of the personal computer that sampling instruments came into use on a commercial scale. Much of the music we hear today in movies, television, and in popular music, is created with samples. Here is a brief explanation of the process.

First, engineers record an instrument being played in a controlled studio environment. Every note is recorded, at various dynamic levels (levels of loudness), and at various timbres, and put into a database known as a “sampling library.” The best libraries contain 100s of gigabytes of samples and can cost thousands of dollars. Fortunately, there are many good-quality sample libraries available at reasonable prices so that aspiring composers can afford them. There are sample libraries for almost every instrument and there are even sample vocal libraries that allow composers to create melodies with words.

Composers of sampled music purchases the libraries needed for the type of music he or she wants to compose. Using a computer that is specially built for music production, the composer works in a sequencer program, known as a DAW (digital audio workstation) to input MIDI data that will trigger the samples at the right dynamic level, with the correct timbre, with the proper articulations (for string instruments is may be articulations that use a bow and those that are created by plucking the strings) to become music. There are usually many tracks for any musical work with each track representing a specific instrument. Each track holds data that represents the actual pitches and how long each pitch is held, the dynamic level of each pitch, the specific manner in which each pitch is performed, and any effects are to be added to the pitch. In the sequencer, the composer decides on which instrument will be used to perform each specific line of music, and then routes the date to the specific place on the hard drive that holds the sample library for that instrument. The data is sent to the sample library and music is sent to the speakers or can be recorded on the same computer and added to other tracks.

One of the most important things to understand about this process is that the computer does not compose the music. The composition still comes from the composer who must be highly musically trained in order to produce music that can be used in any commercial manner. Many people believe that having all of the best equipment, sample libraries and software is all that is needed to create good music. This is not true. The most important part of this process is the musical training and experience of the composer. There are, however, music software programs that allow people with limited knowledge of music to create original works; however, these programs are, at this point in time, limited.

Do you think you can tell the difference between a real performance and a sequenced one? It must be stressed that creating an orchestration with samples is not easy at all. First, a composer has to understand the instruments. A composer must know things like:

There are actual instruments that are rarely seen or heard, but nonetheless exist. Some of these are really not too strange, but some are quite “different.”

This appendix, as an extension of Chapter 2, examined instruments that are not always covered in a typical music appreciation text. Understanding the instruments of the basic “wind band” can help individuals enjoy more types of instrumental music. The modern guitar is a descendent of instruments from antiquity. Whether the guitar is electrified, has 4 strings, 5 strings, 8 strings or even 12 strings, it is used in so many diverse styles that it may be one of the most versatile instruments in history.

Ever since humankind learned how to harness the power of electricity, it has been used to serve us in thousands of ways, including in the area of music. Electronic music can recreate music of the past and take us into the future as software applications become more and more advanced.

Appendix 3 - Individual Instruments of the Orchestra