This chapter covers where our laws come from and how different types of laws have varying weights of importance. A large part of law school, and being a lawyer, is figuring out if there is a law that applies to a specific situation to tell us what the outcome in that situation should be. Before looking for laws that sound like they apply, however, you need to know in which sets of laws you should start looking.

One of the primary tenets of the American legal system is (supposed to be) that you can predict what the outcome will be in a given situation because you can look to past cases with similar facts and know that the same types of reasoning in those past cases will be used in the current situation.

Mandatory authority refers to any law that a court in a particular jurisdiction must follow when trying to solve a legal problem. This will include the United States Constitution, the state Constitution, judicial decisions by the United States Supreme Court, judicial decisions made by higher courts in that court’s jurisdiction, statutes enacted by the legislature, and regulations promulgated by administrative agencies that exercise authority over that jurisdiction. Most often in law school, you will be applying cases and statutes to hypothetical situations, so throughout this manual I will focus on those two types of law.

Persuasive authority, then, refers to any law or other material that a court may consider when trying to solve a legal problem. There are times when a particular jurisdiction does not have any statutes, cases, or other laws that address the legal issue, so a court can look outside its own jurisdiction for guidance about how to proceed. Other times, a jurisdiction considering changing its law will look to other jurisdictions to see how they are currently addressing a particular issue. Persuasive authority includes all laws and material from any place outside the jurisdiction, including state Constitutions, judicial opinions, statutes, and regulations.

The United States follows the English common law system, which means, in very simplified terms, that judges create laws as they render decisions, and that future individuals and entities are bound by those decisions in the same way they would be if that law had been enacted as a statute. Several of your first-year courses come from this common law system, although the principles in some jurisdictions have been codified.

Legal precedent means past judicial decisions that a court must follow in the future; therefore, legal precedent is a type of mandatory authority. To determine whether the past case must be followed, the court and the parties will consider if (a) the material facts of the past case and the current situation are the same, and (b) the legal reasoning applied in the past case is applicable to the current situation. To preview what we will be learning about in later chapters and throughout this year, these are two of the most important skills that you will need to learn: how to determine material facts and how to apply legal reasoning to those material facts.

Stare decisis is Latin for “let the decision stand.” When there has been a decision on a past set of facts that is just like the set of facts currently before the court, then the court must hold that the same outcome should occur. Based on the description of precedent and stare decisis, it can feel like there is not a lot of room for people to disagree on whether a past case will apply. Either it does or it does not, right? Not so fast.

The sources of law that we have been discussing (Constitutions, statutes, regulations, cases) are all considered primary authority. To be considered primary authority, the material must be a type of law itself. However, there are also many materials that interpret, explain, and discuss laws, and these are called secondary authority. Examples of secondary authorities are American Law Reports (ALR), Restatements, encyclopedias, treatises, hornbooks, legal digests, textbooks, legal periodicals, and law review articles.

In the same way that a book examining the Declaration of Independence is a secondary authority, materials that examine sources of law are types of secondary authority. These types of authority are excellent for starting your legal research and for gaining a foundational understanding because they provide an overview of the particular topic and are often presented in easier-to-understand terms than what you will find in cases. Your legal research professor will spend time showing you many resources that you can use.

How Much Weight to Give Different Legal Material

We have looked at different ways to sort legal material: mandatory versus persuasive, whether it’s precedent or stare decisis, and primary versus secondary. Having ways to sort these things is all fine and well, but how does this actually play out when you are a lawyer writing to a court or a law student writing a legal document for a class?

Primary authority in a particular jurisdiction is given more weight than secondary authority.

The primary authority, whether it be the Constitution, a statute, a regulation, or a case, must be relevant to the legal issue that is being considered. If the law does not have a connection to the legal issue at hand, then it has no weight at all.

The United States has three branches of government: the Executive branch, the Legislative branch, and the Judicial branch. Each state within the United States also has a similar governmental setup. All three branches make laws; we often only think about law as being that handed down by judges, but there are far more sources of law than just cases.

The first two graphics and outlines below show from which branch different types of law are created and also provide information on what resource you can consult to locate that type of law. The first graphic and outline show sources of federal law. The second graphic and outline show sources of Georgia state law. Keep in mind that each state, commonwealth, and territory will have its own structure. No one structure is in use and you will have to check on the structure and system in place in the particular jurisdiction in which you are researching, writing, or working.

The third graphic and outline show the United States federal court hierarchy as an example of how different courts’ opinions should be weighted. A highest court’s judicial opinion will carry more weight than an intermediate appellate court, and a lower court’s opinion will carry the least weight of all. 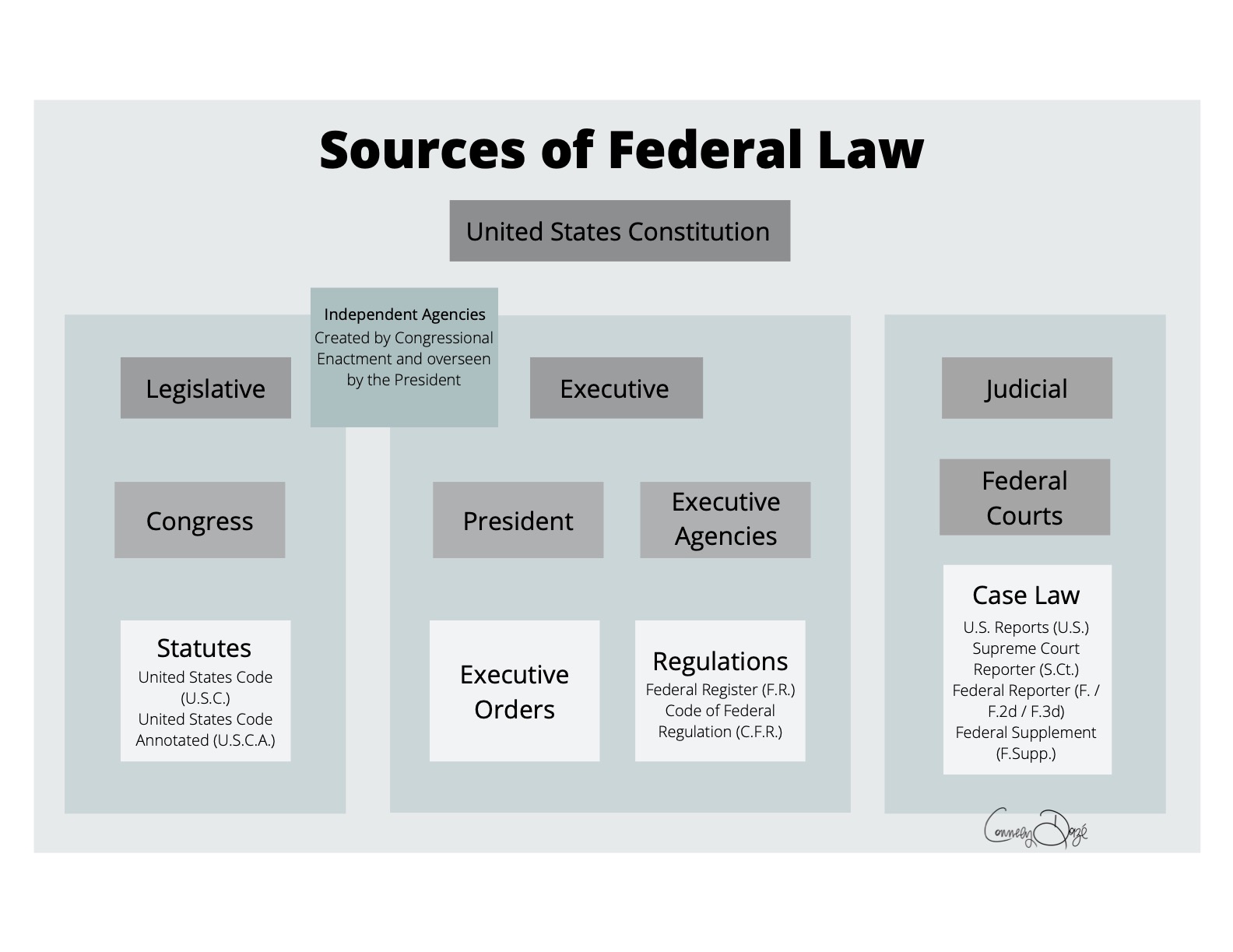 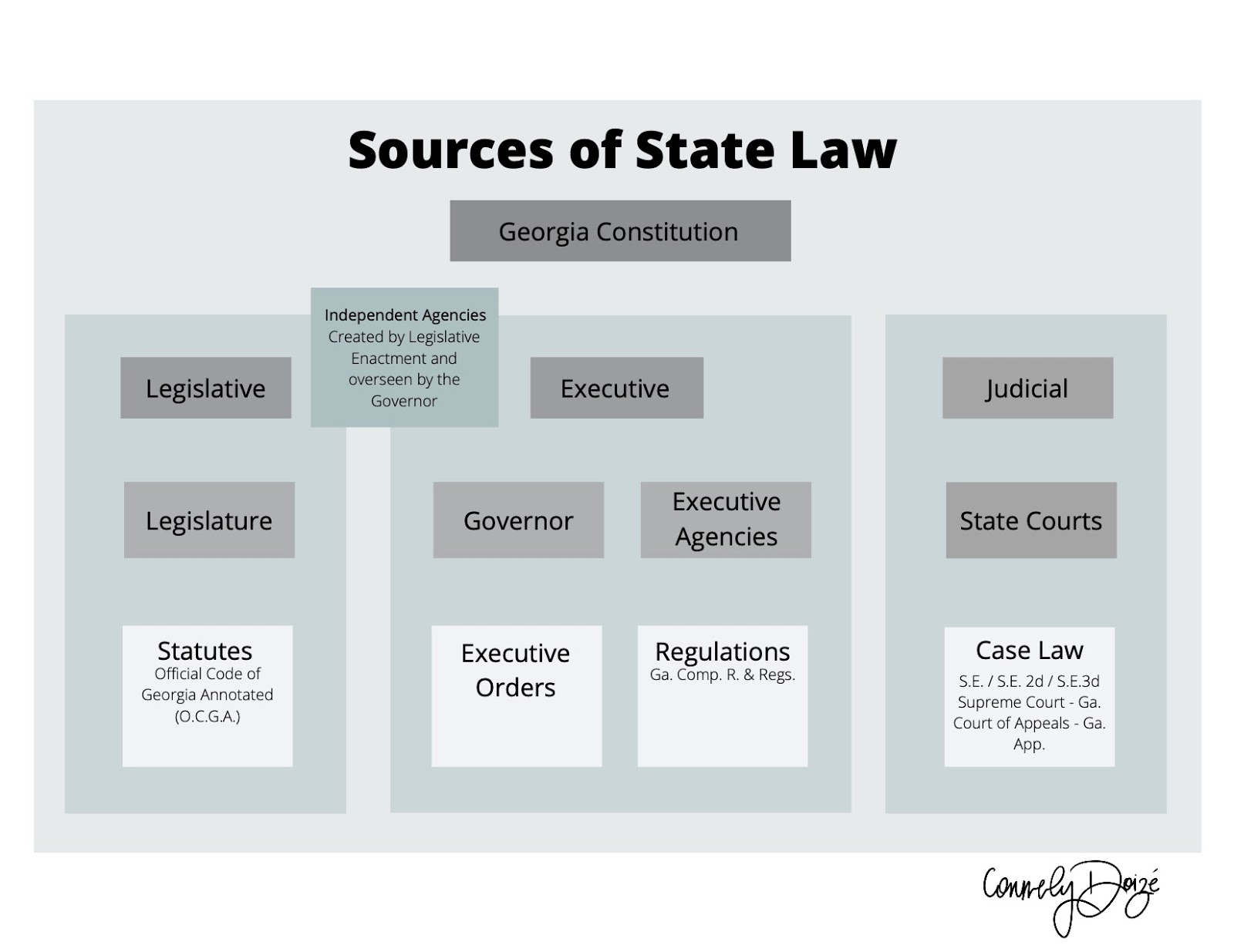 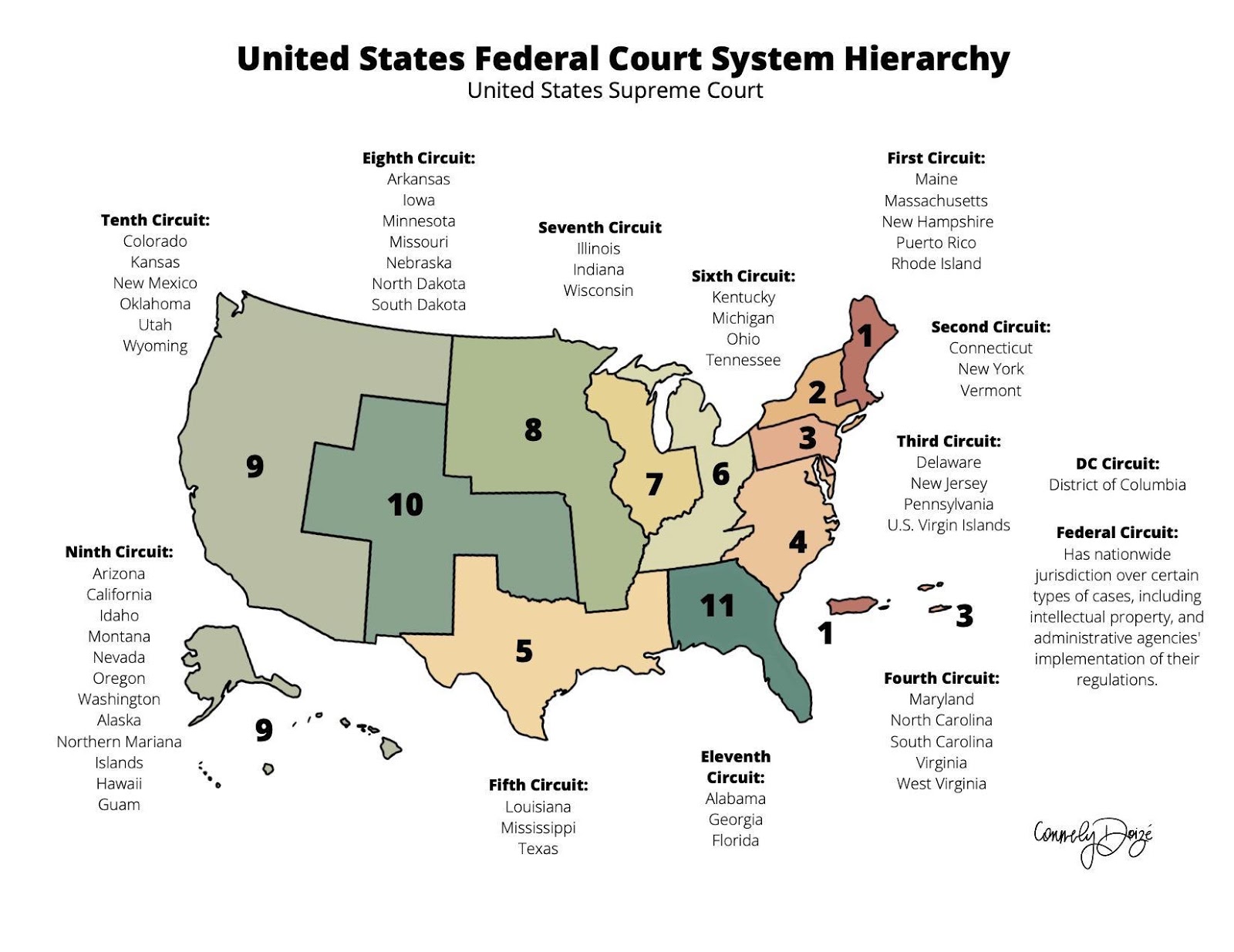 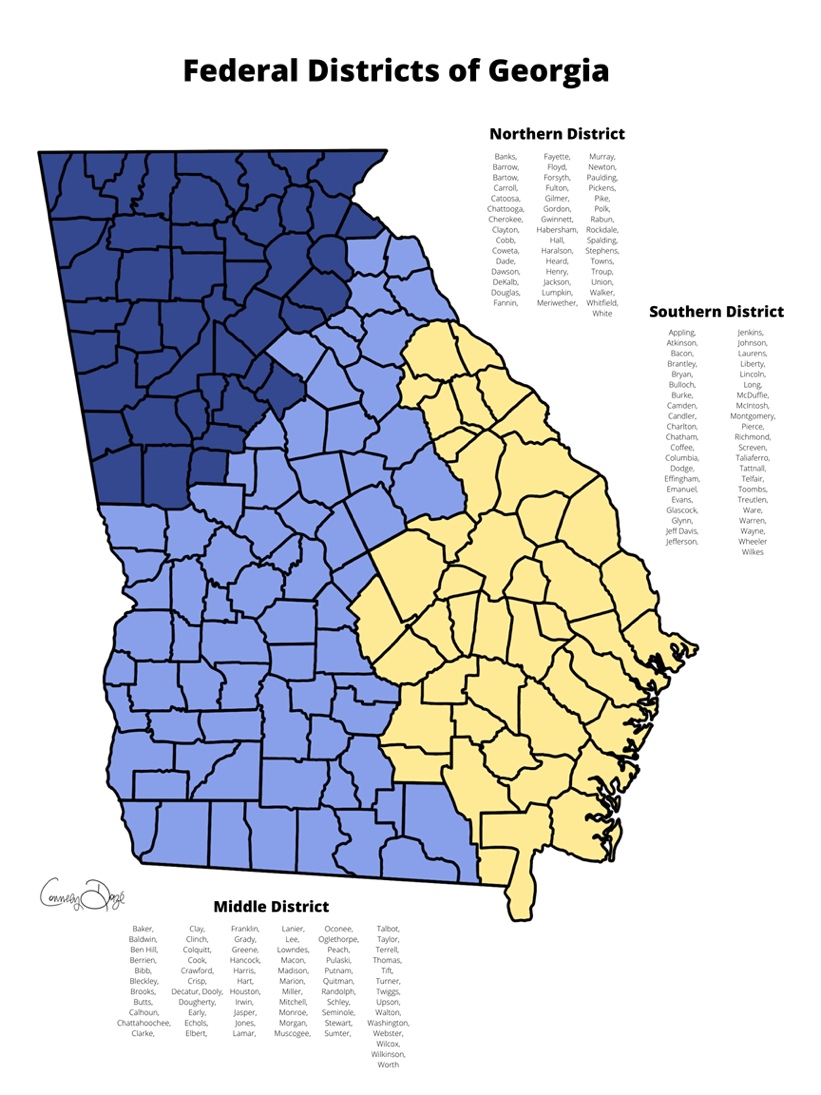 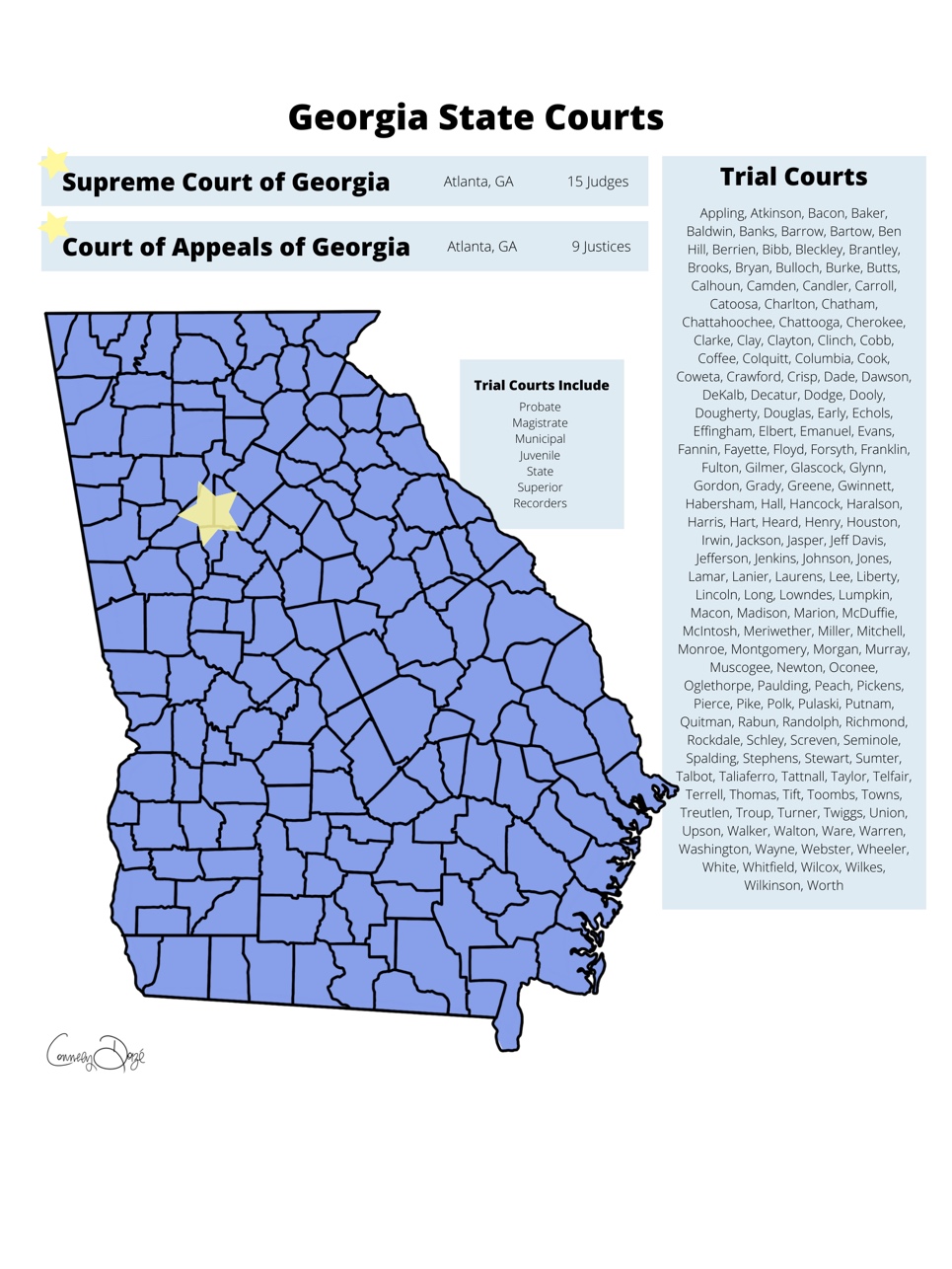 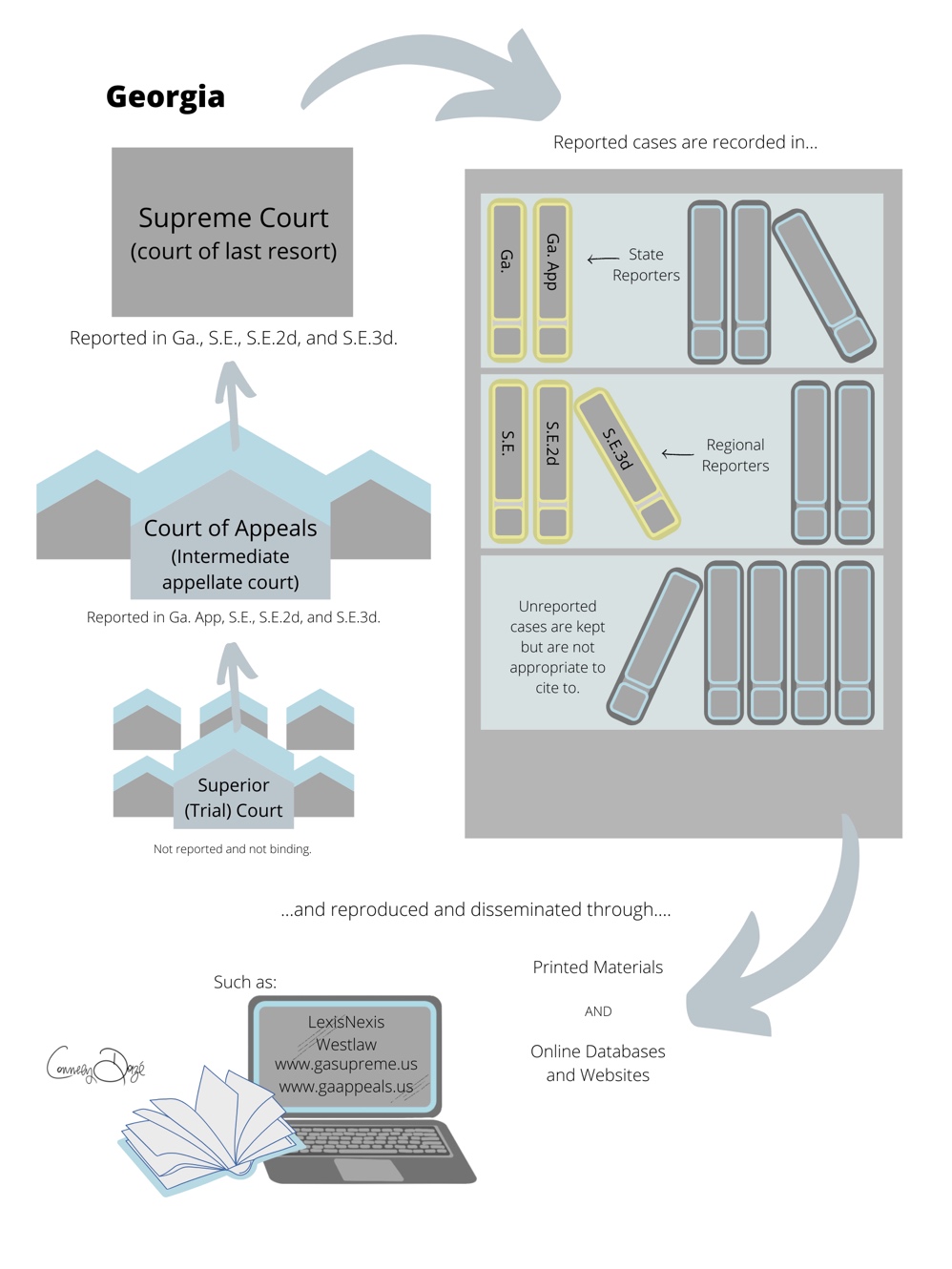 This chapter has given you a quick overview of where our laws come from and how we decide what type of legal material to rely on when formulating legal positions. Like with the material in the rest of the chapters in this manual, there is always more than can be learned and nuances that are not covered.